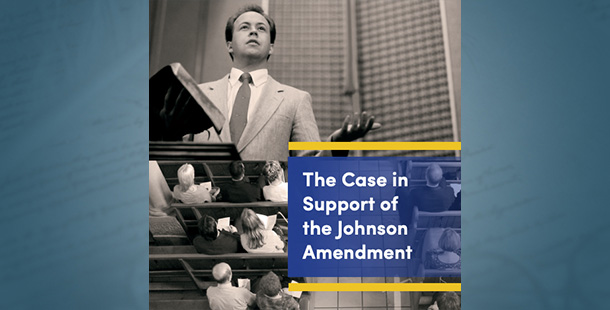 The Freedom From Religion Foundation is pleased to report that Congress is planning to allocate more than $6 billion to the IRS to strengthen its enforcement efforts, which, among other actions, should allow it to crack down on abuse by politicking churches.

“We hope this development will remedy a lamentable track record of non-enforcement of politicking by tax-exempt churches,” says FFRF Co-President Dan Barker, who notes that FFRF had to sue the IRS to nudge enforcement 10 years ago.

The Financial Services and General Government Appropriations Subcommittee released a funding bill that includes $6.1 billion for the IRS to be used for “enforcement,” including investigating criminal misconduct and collecting owed taxes. This is an increase of $682 million above fiscal year 2022. The funds will allow the IRS to add much-needed personnel.

The IRS should now have the means to stop flagrant church violations of the Johnson Amendment, which prohibits nonprofits from engaging in partisan election activity. While FFRF and many other secular nonprofits go to great efforts to ensure compliance with this important law, some churches and other faith-based organizations have openly endorsed political candidates or parties, abusing the privilege of tax exemption and adding more dark money to politics. In fact, a theocratic legal group, the Alliance Defending Freedom, is the chief sponsor and promulgator of “Pulpit Freedom Sundays,” in which it urges churches to openly flout the law and endorse from the pulpit.

Cracking down on these violations will not only increase tax revenue, but will also help to ensure that charitable donations go toward charity, rather than toward political power grabs.

FFRF sued the IRS in 2012 based on its failure to enforce the Johnson Amendment. The case ended successfully in 2014, after the IRS clarified who could authorize church audits and demonstrated that it does have a process for enforcing these violations. Since then, even open violations of the Johnson Amendment appear to have occurred without consequence. One major reason for that was a lack of funding for enforcement, so this development should allow the IRS to show that churches are not above the law.

FFRF is committed to fighting against church electioneering abuses, which include churches misleading their own donors by spending charitable donations on elections, without any accountability. FFRF encourages the IRS to vigorously enforce the Johnson Amendment moving forward, to send a strong message against church abuse of the tax code.

The Freedom From Religion Foundation, the nation’s largest association of freethinkers (atheists and agnostics), has more than 36,000 members and works as a state/church watchdog.