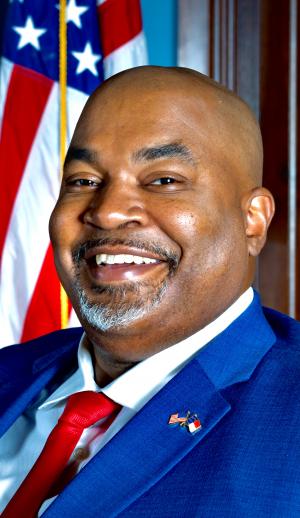 The North Carolina lieutenant governor must rescind his recent misogynistic and Christian nationalist remarks and offer apologies, the Freedom From Religion Foundation is demanding.

Lt. Gov. Mark Robinson reportedly told a Charlotte-area congregation in late May that Christians are “called to be led by men,” that men are to “put on the whole armor of God” and “take the head of your enemy in God’s name.” He continued, “We are called to be led by men. God sent women out . . . when they had to do their thing, but when it was time to face down Goliath, [he] sent David. Not Davita, David.” He said that God sent Moses, “Not Momma Mosese. Daddy Moses.” And Robinson opined that too many people listen to the doctrine “of social justice instead of the doctrine of Jesus Christ” and as a consequence “they will be on their way to hell.”

While he is free to believe whatever he likes and attend whatever church he wishes, as lieutenant governor Robinson represents all North Carolinians — not just fundamentalist Christian men, FFRF emphasizes. His discriminatory remarks based on biblical literalism are an embarrassment to his office and to the state of North Carolina. They also display bigotry against non-Christians, who make up more than 35 percent of the U.S. adult population — with three-in-10 Americans rejecting religion altogether.

“A disturbing number of your remarks carry a perceived threat that is particularly tone deaf following the unspeakable violence on Jan. 6, 2021, to foment an insurrection to stop the legal certification of the presidency,” FFRF Co-Presidents Dan Barker and Annie Laurie Gaylor write to the lieutenant governor. “Your ill-advised and ignorant remarks, made as the second-highest elected officer in your state, create a hostile environment for women, nontheists and other non-Christians.”

Robinson is displaying an unfortunate pattern of giving sermons in church as a public official that blur the line between state and church and are deeply offensive. FFRF has noticed Robinson’s encouragement to censor books in school libraries and his anti-LGBTQ remarks, particularly in a March church sermon at Prospect Baptist Church in Albemarle that if someone reads a book about transgenderism or homosexuality, they are “as much of a groomer as that person was down at that playground.”

“You took an oath of office to protect and defend the U.S. Constitution, which is a godless and entirely secular document that scrupulously separates religion from government and which also protects equal justice under the law,” FFRF’s letter concludes. “Live up to that oath. Retract and apologize!”

The Freedom From Religion Foundation represents over 36,000 members and has several chapters nationwide, including more than 800 members and a Triangle-area chapter in North Carolina. It works to protect the constitutional principle of separation between church and state and to educate the public about nontheism.