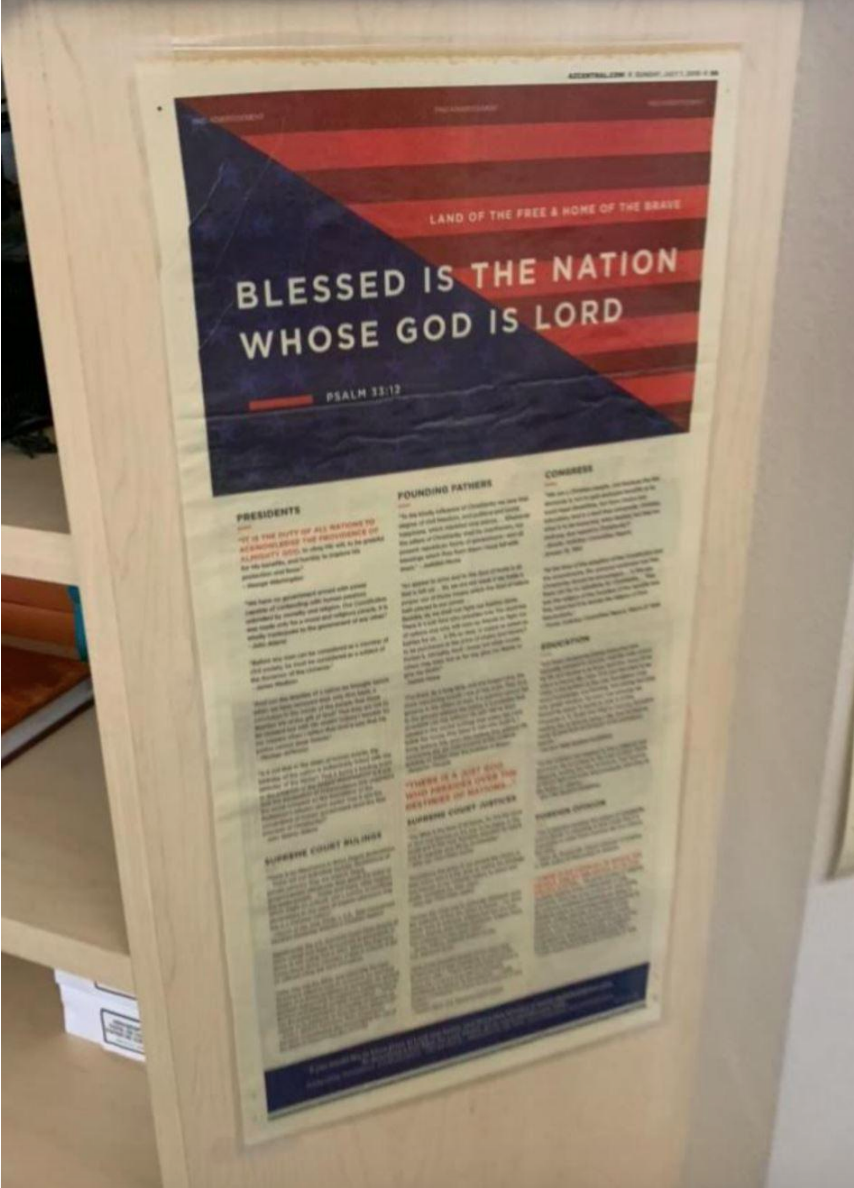 The Scottsdale Unified School District has remedied a serious state/church violation following the advice of the Freedom From Religion Foundation.

A concerned district student recently informed the state/church watchdog that a Chaparral High School teacher had been abusing his position to proselytize and impose his religious beliefs on his students. The student reported that the teacher delivered a sermon to students during class time, that he had religious materials posted in his classroom and that he had also told students they need “a loving daily relationship with our Lord and Father in heaven” and “to repent of [their] sins.” The teacher also directed students to google “23 minutes in hell” to “learn about the other place.”

This teacher was unlawfully and inappropriately indoctrinating students in religious matters by discussing personal religious beliefs, preaching, displaying religious messages and creating a religious environment in the classroom, FFRF pointed out.

“It is a fundamental principle of Establishment Clause jurisprudence that a public school may not advance, prefer, or promote religion,” FFRF Staff Attorney Chris Line wrote to Scottsdale Unified School District Superintendent Scott A. Menzel. “Public schools must remain neutral with regard to religion.”

And, FFRF emphasized, it is not a violation of the free speech rights of teachers when a school district regulates what they teach to students while acting in their official capacities. Teachers have access to a captive audience of students due to their position as public educators. Therefore, the district must regulate religious proselytizing during the school day.

The Scottsdale Unified School District has taken swift action to address FFRF’s concerns and ensure that Chaparral High students are no longer subject to religious proselytization in its schools.

“The district has set in place the following: Lessons created by [the teacher] will be reviewed by his school administration,” the school district's legal counsel responds to FFRF. “Further, the school administration will conduct random observations of the classroom to ensure appropriate materials are being used and/or displayed.”

FFRF appreciates the school district’s constitutional course correction and its promise to keep a watchful eye on this teacher.

“We applaud the district’s timely action to stand up for its students’ rights of conscience,” comments FFRF Co-President Annie Laurie Gaylor. “Students cannot have freedom of religion without a school system that is free from religion."

The Freedom From Religion Foundation is a national nonprofit organization with over 36,000 members and several chapters across the country, including more than 900 members and a chapter in Arizona. Our purposes are to protect the constitutional principle of separation between state and church and to educate the public on matters relating to nontheism.