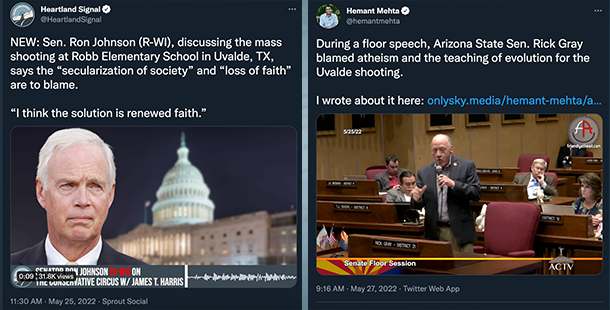 The Freedom From Religion Foundation is condemning a recent barrage of troubling comments by politicians callously blaming the Texas school shooting on atheism, irreligiosity or lack of faith.

FFRF has sent letters to four different high-ranking public officials who have recently made outrageous remarks about religion and mass shootings. Arizona state Sen. Rick Gray provides the vilest example in a speech he gave on the state Senate floor:

The real core issue — and I’ll be honest, this may be my bias, but this is how I see it — for decades, for decades, we’ve been teaching our children in school there is no God. You can’t pray. You can’t even pray on the field! There is no God. There are no absolutes. We live in a post modern world, so whatever you think is right is right, and if somebody else has a different view, you’re still right. There are no absolutes.

That we’re animals. And we’re just animals. It’s survival of the fittest. But then we’re shocked when they act that out! But we say, “Don’t act that way!” These kids — and it’s usually been kids that are shooting kids in school — what have they been taught? Friends, we have a state religion in the United States of America, even though there’s supposed to be separation of church and state, there is a state religion. It’s Human Secularism, aka Atheism.

We are in a sick society where we are at each other’s throats all the time. … Everywhere you look, whether it’s on the internet, whether it’s any walk of life, people are just at each other every day and we have to ask ourselves who we are, and I believe we’re a nation of godly people, and godly people need to pray.

And Sen. Ron Johnson, who represents FFRF’s home state of Wisconsin in the U.S. Senate, in an interview with the radio show “Conservative Circus” blamed the “secularization of society” and “loss of faith” for last week’s mass shooting. He also claimed: “The solution is renewed faith.”

A similar letter was also sent to Virginia Lt. Gov. Winsome Sear for her remarks blaming godlessness for school shootings and suggesting more school prayer is the solution.

As FFRF has pointed out to innumerable public officials, these assertions scapegoat secularism and dodge a very real problem by claiming prayer or religion is the panacea for gun violence. Pious politicians often highlight the 1962 Supreme Court decision Engel v. Vitale, which ruled that school-sponsored prayers in public schools violate the First Amendment, as the point where we “removed God from schools,” blaming this for school shootings ever since. In reality, there were school shootings before that case,  and there was no spike in school shootings immediately following the ruling.

School shootings are a real-world problem that requires a real-world solution, not a plea for nonexistent supernatural intervention. Scientific studies show that societies and states with less religion have less violence.

Phil Zuckerman writes in a 2019 article in Sociology Compass that murder rates are lower in more secular nations and higher in more religious nations where belief in God is deep and widespread. And within America, the states with the highest murder rates tend to be highly religious, such as Louisiana and Alabama, but the states with the lowest murder rates tend to be among the least religious in the country, such as Vermont and Oregon. Furthermore, although there are some notable exceptions, rates of most violent crimes tend to be lower in the less religious states and higher in the most religious states. Finally, of the top 50 safest cities in the world, nearly all are in relatively nonreligious countries, and of the eight cities within the United States that make the safest-city list, nearly all are located in the least religious regions of the country.

Young Americans are less religious than ever, with atheism doubling among Generation Z, and they are demanding real action to stop the school shooting epidemic. Rather than advocating for more prayer, FFRF says that the answer is to: “Get off your knees and get to work!