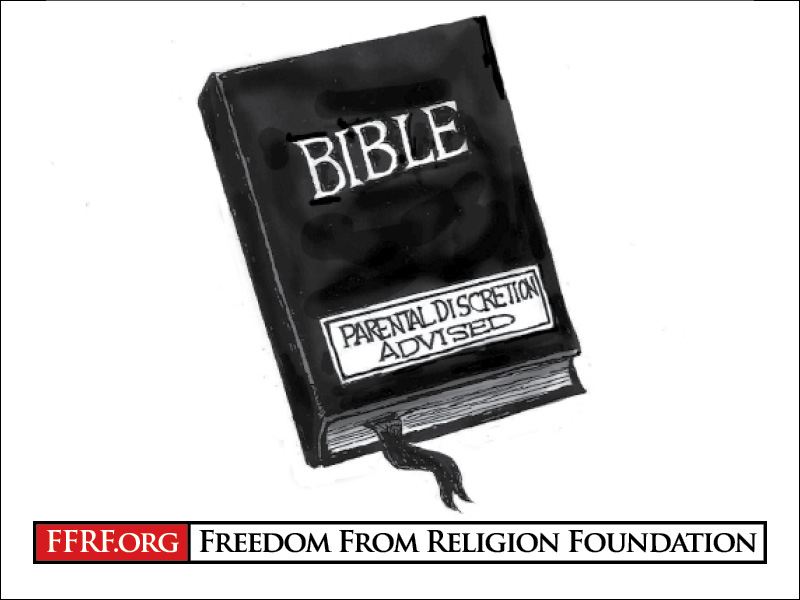 A new Florida law gives easily offended parents a way to ban books from their childrens’ public school libraries. There have been more than 200 book bans across Florida in the past year, according to a report by the advocacy group PEN America. In order to combat these reprehensible bans, FFRF is encouraging parents to ensure that any book bans include the bible, which contains far more objectionable material than other books that have drawn the ire of parents lately.

To be clear, FFRF strongly opposes book bans. Public school libraries are a crucial resource for many students, and librarians should be trusted to provide students with a diversity of perspectives on many topics. FFRF advocates, above all, for freedom of thought. We believe that there is no true freedom of thought, conscience, or even religion, unless our government and its public schools are free from religion. We are deeply familiar with the haunting history of censorship — from the Catholic Church’s Index Librorum Prohibitorum, to the Comstock laws, to the Nazi book burnings, the attacks on authors such as Charles Darwin and Salman Rushdie, and the murders of Bangladeshi bloggers such as Avijit Roy. Heinrich Heine famously observed, “Where they burn books, they will end in burning human beings.” History never looks kindly on book censors and burners.

The best solution is to leave a diversity of viewpoints in school libraries, and allow students to explore disparate views themselves. However, if school districts, at the behest of outraged parents, are intent on banning books, we suggest that, if they truly care about protecting children, they are looking at the wrong books.

If parents and lawmakers are looking to ban books with “inappropriate” content, perhaps they should investigate books that can be found in almost every school library. In one, rape is not only described, but the victims are forced to marry their rapists. (Deuteronomy 22:28–29.) Another tells the story of a prostitute who “lusted after her lovers, whose genitals were like those of donkeys and whose emission was like that of horses,” who “longed for the lewdness of your youth, when . . . [her] bosom was caressed and your young breasts fondled.” (Ezekiel 23:20–21.) This same book speaks about sex toys: you “took the fine jewelry I gave you, the jewelry made of my gold and silver, and you made for yourself male idols and engaged in prostitution with them.” (Ezekiel 16:17.) Another book has a character who prays, “may her breasts satisfy you always, may you ever be intoxicated with her love.”(Proverbs 5:19.) In yet another, a future husband purchases a wife by killing 200 of her fathers’ enemies, mutilating their corpses, and bringing back their foreskins as a dowry. (1 Samuel 18:27.) Another sordid and preposterous story that defames incest victims recounts the exploits of two daughters who, having just witnessed a genocide and the murder of their mother by a pyromaniacal god, supposedly got their father drunk and seduce him in order to bear his children. (Genesis 19.) Yet another book describes sperm, intercourse, menstruation, homosexuality, bestiality, adultery, and whores. (Leviticus.) Another depicts a holy man impaling a woman through her belly and describes in loving detail how to steal and rape virgins as war booty. (Numbers.) Yet another tale tells how a woman has her hand cut off for touching a man’s penis. (Deuteronomy 25:11–12.) In another, women’s skirts are lifted over their face so their nakedness and shame can be shown to all. (Nahum 3:5.) Another tale describes a man touching a woman’s “hole of the door” and how her “bowels were moved for him.” (Song of Solomon 5:4.)

These and many more unpalatable and sexually explicit stories are found in the various books of the bible. Our educational association has published a brochure, An X-Rated Book: Sex & Obscenity In the Bible, which exposes nearly 150 bible verses displaying a “pornographic view of sex and women, lewdness, depravity and sexual violence often ordered or countenanced by the biblical deity.”

FFRF Co-President Dan Barker has written an entire book on the evils of the bible, GOD: The Most Unpleasant Character in All Fiction. Chapters document “divinely” ordered genocide, infanticide, and filicide, among many other atrocities, as well as the biblical deity’s racism, sexism, slavemongering and sadomasochism. An interactive companion website details all of this and more. These verses are one reason why FFRF gives away bible warning labels to place on hotel bibles saying, “Warning: Literal belief in this book may endanger your health and life.”

The bible is the single most weaponized piece of writing on the planet, responsible for unjust wars, genocide, anti-semitism, violent extremism, subjugation of women and pervasive racism. Throughout the Crusades, the Inquisition, the witch hunts, chattel slavery, the Holocaust, and the history of homophobia, the bible looms large. As author Ruth Hurmence Green eloquently put it, “There was a time when religion ruled the world. It is known as the Dark Ages.”

If Florida lawmakers are going to declare a war on writings that parents find dangerous to young minds or potentially harmful to society, then they must reckon with the full legacy of the bible: its primitive teachings, inhumanity, violence and sexual immorality. The current crusade against “Critical Race Theory,” graphic novels about the Holocaust, and anything related to LGBTQ people is simply the latest example of the bible’s negative influence.

Unfortunately, the campaign to remove certain books seems concerned only with protecting children from broadening their understanding of the world. A proper education, which should expose students to diverse ideas and facts, and enlarge and develop their minds and understanding, is bound to occasionally make students “uneasy.” Growth often is uncomfortable. Florida’s quest to ban certain books seeks to limit students’ growth by discouraging them from reading books other than the so-called “holy” book, while hypocritically ignoring the bible’s abysmal moral and pedagogical failings.

The “inappropriate” sections of many of the books being reviewed by Florida’s school districts are just minor parts of books that have much higher literary value. Reading takes time, and understanding books critically takes even more thought. Those who propose book bans target gullible audiences with selective material. They fear free inquiry and independence of thought. In Florida, as with the rest of the country, most of the book banning impetus is manufactured, with pre-made lists of books and quotes circulated by self-righteous grandstanders who are hostile to critical thinking. In short, the current wave of book banning is not about protecting children, it is about discouraging thought.

We strongly urge Florida lawmakers to reverse course and cease their efforts to ban books from Florida’s public school libraries. If they are hellbent on removing “inappropriate material,” then parents must demand that their school districts be even-handed in their purge and immediately remove the bible from their classrooms, libraries, and any instructional materials.