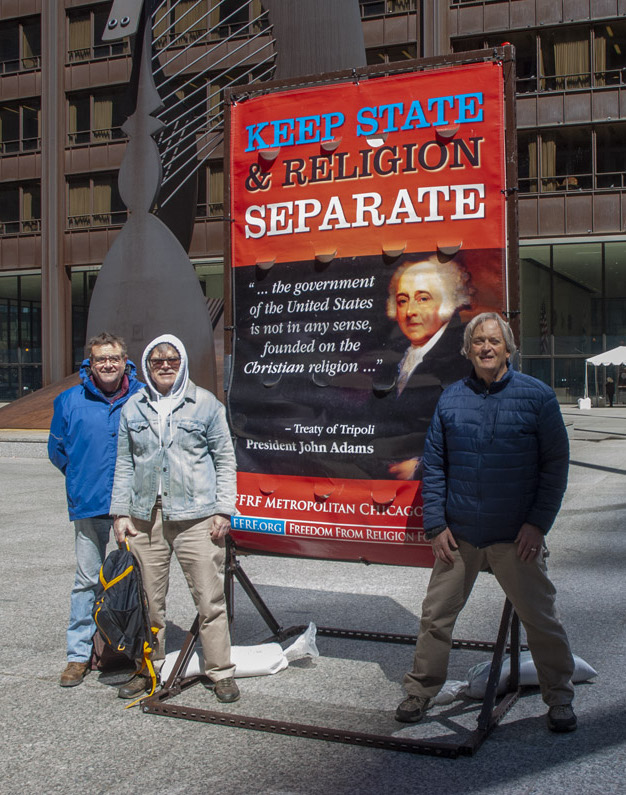 The Freedom From Religion Foundation’s Windy City chapter has yet again done stellar work on the behalf of secularism.

On Thursday, April 14, FFRF’s Metropolitan Chicago Chapter (FFRFMCC) placed in Daley Plaza (in the heart of downtown Chicago) colorful banners promoting the secular views of the Founders. The display will be on public view until Thursday, April 21. A good part of the purpose is to counter a Catholic shrine.

One banner reads “In Reason We Trust” and pictures Thomas Jefferson, highlighting his famous advice to a nephew: “Question with boldness even the existence of a god.” The other proclaims, “Keep State & Religion Separate” and pictures President John Adams, who signed the Treaty of Tripoli, which assured that “the government of the United States is not in any sense, founded on the Christian religion.”

The FFRF display has been designed to balance a period of prayer and evangelism that occurs annually in Daley Plaza by a rightwing Catholic group, the Thomas More Society, that has preached in the plaza every Easter since 2011. The group’s aim, through its “Divine Mercy Project,” is to seek the “conversion of Chicago, America and the whole world.”

The Thomas More Society’s Catholic shrine was placed there on Friday. The group held its annual Easter worship service right there on the plaza. In past years, Catholic supporters have also held 24-hour prayer vigils, distributed thousands of prayer cards and hosted anti-abortion rallies in front of the Jesus painting.

FFRF warmly thanks FFRFMCC Executive Director Tom Cara for securing a permit for the display and three board members of the local chapter, Steve Foulkes, Bob Hunter and Shane Stapley (pictured above from left to right), for their assistance in putting it up. (The photos were taken by FFRFMCC member Bob Elmore, who is a professional photographer.)

The Freedom From Religion Foundation is a national state/church watchdog with more than 36,000 nonreligious members and several chapters all over the country, including 1,100-plus members and the Metropolitan Chicago chapter in Illinois.