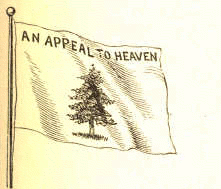 The Freedom From Religion Foundation is urging the Arizona state Capitol to remove a highly problematic Christian nationalist flag currently on display there.

The flag, which reads “Appeal to Heaven,” is currently flying on the second floor of the Arizona legislative building. This flag is associated with the recent Appeal to Heaven movement, whose adherents “honor the Lord by supporting candidates for public office who are believers in Jesus Christ, who regularly attend and display a commitment to an evangelical, Gospel-centered church, and who will commit to live and govern based on biblical . . . principles.” The inherent religious significance of the “Appeal to Heaven” flag is undeniable. While the flag historically has ties to our country’s founding, it is now viewed as a Christian flag.

“Like the Ten Commandments posters in county buildings in McCreary (2005) and the crèche display on county land in Allegheny  (1989), this display of a Christian flag in a public Statehouse is viewed by a reasonable observer as an endorsement of religion, and is, therefore, unconstitutional,” FFRF Staff Attorney Chris Line writes to Arizona House Speaker Russell “Rusty” Bowers.

Plus, this flag display alienates 29 percent of Americans who are nonreligious.

The Freedom From Religion Foundation is a national nonprofit organization with more than 36,000 members and several chapters across the country, including more than 900 members and a chapter in Arizona. Our purposes are to protect the constitutional principle of separation between state and church, and to educate the public on matters relating to nontheism.