No unconstitutional PR for churches, FFRF insists to Indiana DNR 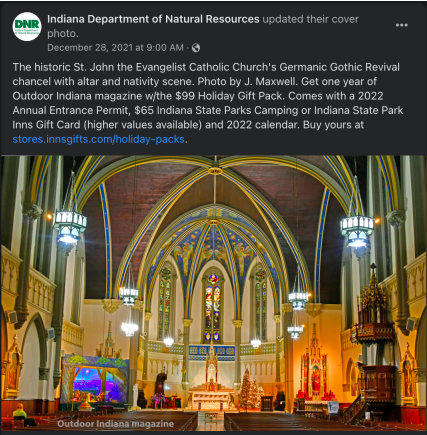 Focus on the natural outdoors instead of church interiors, the Freedom From Religion Foundation is advising the Indiana Department of Natural Resources.

An Indiana resident recently contacted the state/church watchdog regarding the Indiana DNR’s promotion of the Indianapolis-located St. John the Evangelist Catholic Church in a Facebook post. A photo of the church was made the cover photo for the DNR’s Facebook page and the caption emphasized the church’s “chancel with altar and nativity scene.” The post included an invitation to purchase a DNR Holiday Gift Pack. The post suggests that the photo is included in Outdoor Indiana magazine, the Indiana DNR’s official publication.

By posting a photo of the interior of a Catholic church emphasizing a nativity scene and associating it with sales of its magazines and permits, the Indiana DNR is endorsing religion in prohibition of the Establishment Clause, FFRF contends.

Equally importantly, FFRF emphasizes, as a state department, the Indiana DNR serves a diverse Hoosier population that consists of not only Catholics and other Christians, but also minority religious and nonreligious citizens. Religious endorsements made by the department send a message that excludes the almost 30 percent of Americans who are not religious. Posting photos of any interiors is an odd use of tax money for a Department of Natural Resources; posting photos of church interiors and emphasizing the religious imagery while promoting an official magazine and state park permits goes far beyond this, since it serves no legitimate purpose and alienates those who do not share the promoted beliefs.

The Supreme Court has described the power of social media sites as “the principal sources for knowing current events, checking ads for employment, speaking and listening in the modern public square, and otherwise exploring the vast realms of human thought and knowledge,” FFRF informs the Indiana DNR. That’s why government entities must be particularly diligent not to entangle religious messages with official government pronouncements made in this “modern public square.” This certainly also applies to an official DNR magazine.

To avoid further constitutional concerns, the Indiana DNR must refrain from promoting religion on social media and in its literature, FFRF is insisting.

“Indiana has abundant natural beauty for the state DNR to promote,” says FFRF Co-President Annie Laurie Gaylor. “There is no reason for it to transgress constitutional boundaries and display church interiors.”

The Freedom From Religion Foundation is a national nonprofit organization with more than 36,000 members and several chapters all across the country, including over 500 members and a chapter in Indiana. FFRF’s purposes are to protect the constitutional principle of separation between state and church, and to educate the public on matters relating to nontheism.