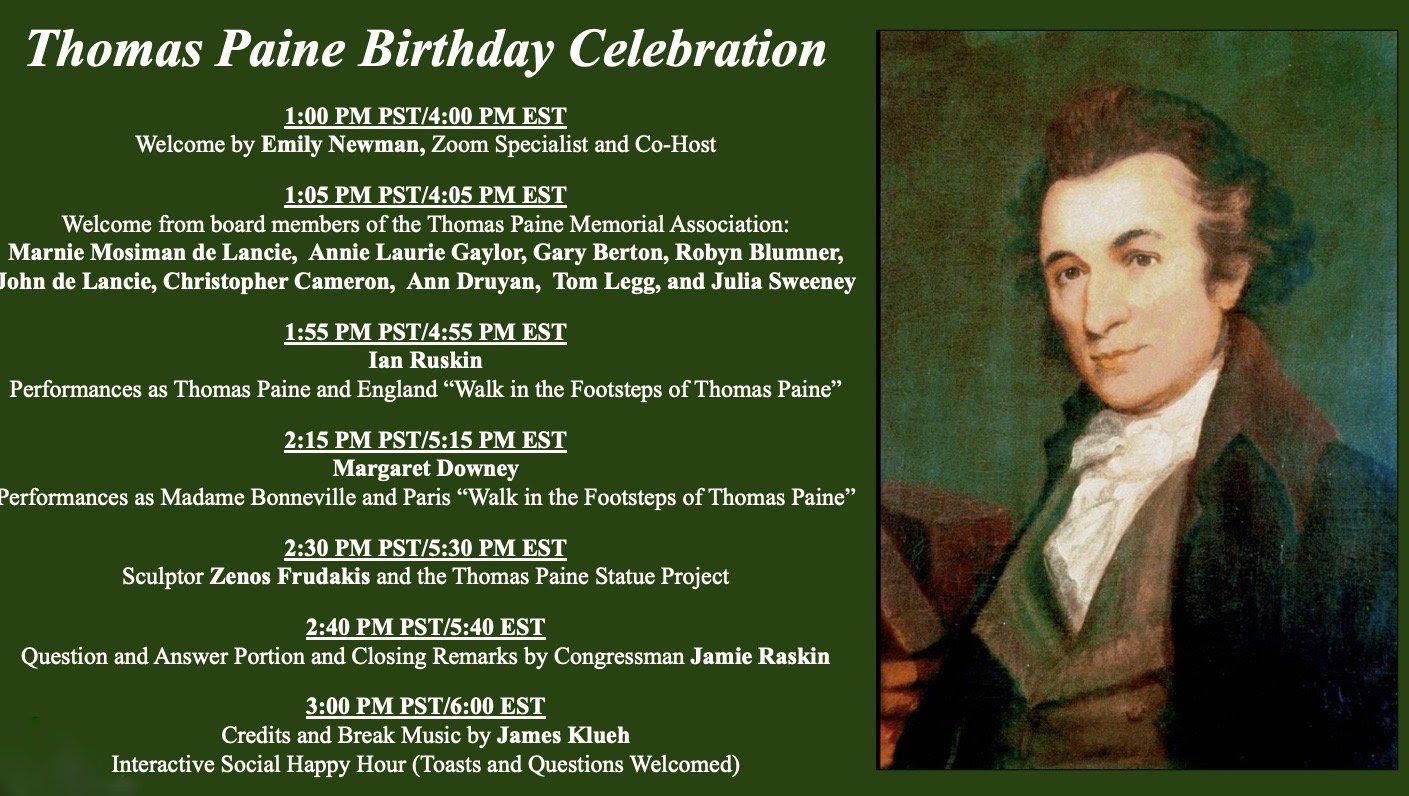 At a time when secularists and the world in general are in dire need of good news, the Thomas Paine Memorial Association (TPMA) is providing something to cheer about!

The new Paine association announces an exciting matching gift offer to kick off fundraising for that long overdue memorial. TPMA also announces that a congressional resolution to authorize the memorial is expected to be introduced in the near future.

Todd Stiefel, founder and president of the Stiefel Freethought Foundation, has announced that the foundation will match donations to TPMA up to $250,000, and will TRIPLE donations received before and on Jan., 29th — the 285th anniversary of Thomas Paine’s birth. TPMA will be holding the first-ever Zoom celebration of the birthdate of Thomas Paine on Sat., Jan. 29, beginning at 1 PM (PST)/4:00 PM (EST).

“Thomas Paine was a patriot, revolutionary, Founding Father and a victim of colonial American cancel culture,” says Todd Stiefel, in explaining his foundation’s extraordinary offer. “His advocacy for freedom from authoritarian organizations made him both lionized and ostracized. It is past time for his legacy to be restored and to honor his critical role in driving and sustaining the American Revolution. Without Paine, there likely would not be an America.”

Encouraging secularists and Thomas Paine admirers to step up to the plate, this stupendous matching gift should ensure the financial success of the ambitious statue project and long-desired goal to erect more memorials to honor this overlooked Founder and freethinker.

TPMA is sponsoring the upcoming Zoom event, which will include celebrity spokespersons, music, presentations by actors, a visit to the studio of Zenos Frudakis, who is sculpting the monument, and closing remarks by U.S. Rep. Jamie Raskin.

“Zoom connections will be made from all over the world and everyone will be invited to toast the life and work of Thoms Paine during the post-event social hour,” Downey adds.

The event line-up will include remarks from:

—U.S. Rep. Jamie Raskin, who has called Paine’s legacy “endlessly rich and fertile for us who continue to fight for strong democracy.”

—Ann Druyan, “Cosmos” author, producer, director and honorary TMA board member, who points out: “Thomas Paine is that rarity, a Founding Father, for whom we need not make any excuses. For too many of his contemporaries it is time to come to grips with their crimes and tear down their statues. For Thomas Paine it is long overdue to raise one up.”

—Julia Sweeney, actor, comedian, and writer (“Letting Go of God”), who credits Paine for encouraging “this country to strive to be more honest, more equitable, more reasonable, and more democratic.”

—Christopher Cameron, professor, author of Black Freethinkers and TPMA board member, who lauds Paine as a “stalwart champion of the downtrodden and the oppressed.” He adds, “In addition to inspiring the Declaration of Independence with his pamphlet ‘Common Sense’ and stirring the hearts of weary troops with his ‘Crisis’ essays, Thomas Paine was a pioneering abolitionist who published anti-slavery essays as early as 1776.”

—John de Lancie, actor (“Q”), director, producer, writer, and honorary TMPA honorary director, who comments, “The more I read Thomas Paine, the more I feel we’ve let him down. We have a lot of work to do.” Actor, singer and TMPA Honorary Director Marnie Mosiman de Lancie, says, “I think Paine would be astonished that we would once again be fighting for all citizens to have the simple right to vote.”

Other participants will include Downey, Gaylor, CFI President and TMPA Vice President Robyn Blumner (who quips, “If only more people read and understood the writings of Thomas Paine, perhaps rabbit holes would just be where rabbits lived.”), TMPA Board Member and Paine researcher Gary Berton, the monument’s sculptor Zenos Frudakis, who will appear during the event from the studio where he is fashioning the statue, and actor Ian Ruskin, who will speak about his experiences portraying Paine in his play, “To Begin the World Over Again.” Educator, songwriter and recording artist James Klueh will perform two Paine-themed songs prior to the interactive social hour.

Please visit this link to register for this exciting international event.

FFRF is an organizational founding member of TPMA, which is a new 501(c)(3) organization with the purpose of educating the public and installing statues of Thomas Paine in Washington, DC and other places of significance to the life of Thomas Paine.

FFRF works as a national state/church watchdog, with more than 35,000 freethinking members nationwide.