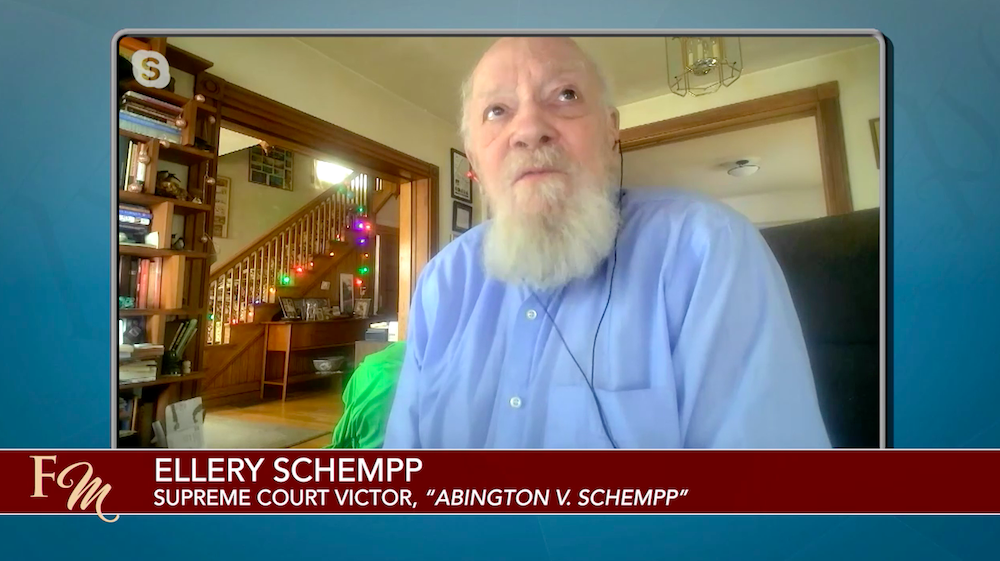 One of the legends in Establishment Clause law is the guest on this week’s edition of “Freethought Matters,” the weekly public affairs talk show of the Freedom From Religion Foundation.

Ellery Schempp, a distinguished retired scientist, recounts how, as a 16-year-old high school student in the late 1950s, he helped forge constitutional law by protesting bible reading and recitation of the Lord’s Prayer at his school. He and his family became the winning litigants in the landmark Supreme Court case, Abington v. Schempp, handed down in 1963.

The program begins with a historic excerpt of an interview of young Ellery, conducted by famed TV reporter Eric Sevareid in 1963. Ellery told Sevareid how he was sent to the principal’s office for challenging the religious rituals and was made to understand that he was in need of psychological help!

Now 82, Ellery confides to “Freethought Matters” host Dan Barker that his high school principal had even urged Tufts University, where he’d been accepted as an undergrad, not to accept the academically gifted young man because of his prayer protest.

“And so he called the dean and said I was the rotten apple in the barrel and if you admit him you'll regret it forever and you should rescind his admission right away,” recalls Ellery, with a chuckle. “Dean Stearns told me it was the funniest conversation he ever had over admissions. And he was very kind to say he never regretted the decision.”

This is one of several “Freethought Matters” interviews with prime source litigants who took and won major cases against religion in the public schools, including Jim McCollum, Dan McCollum and Debbie and Dan Weisman.