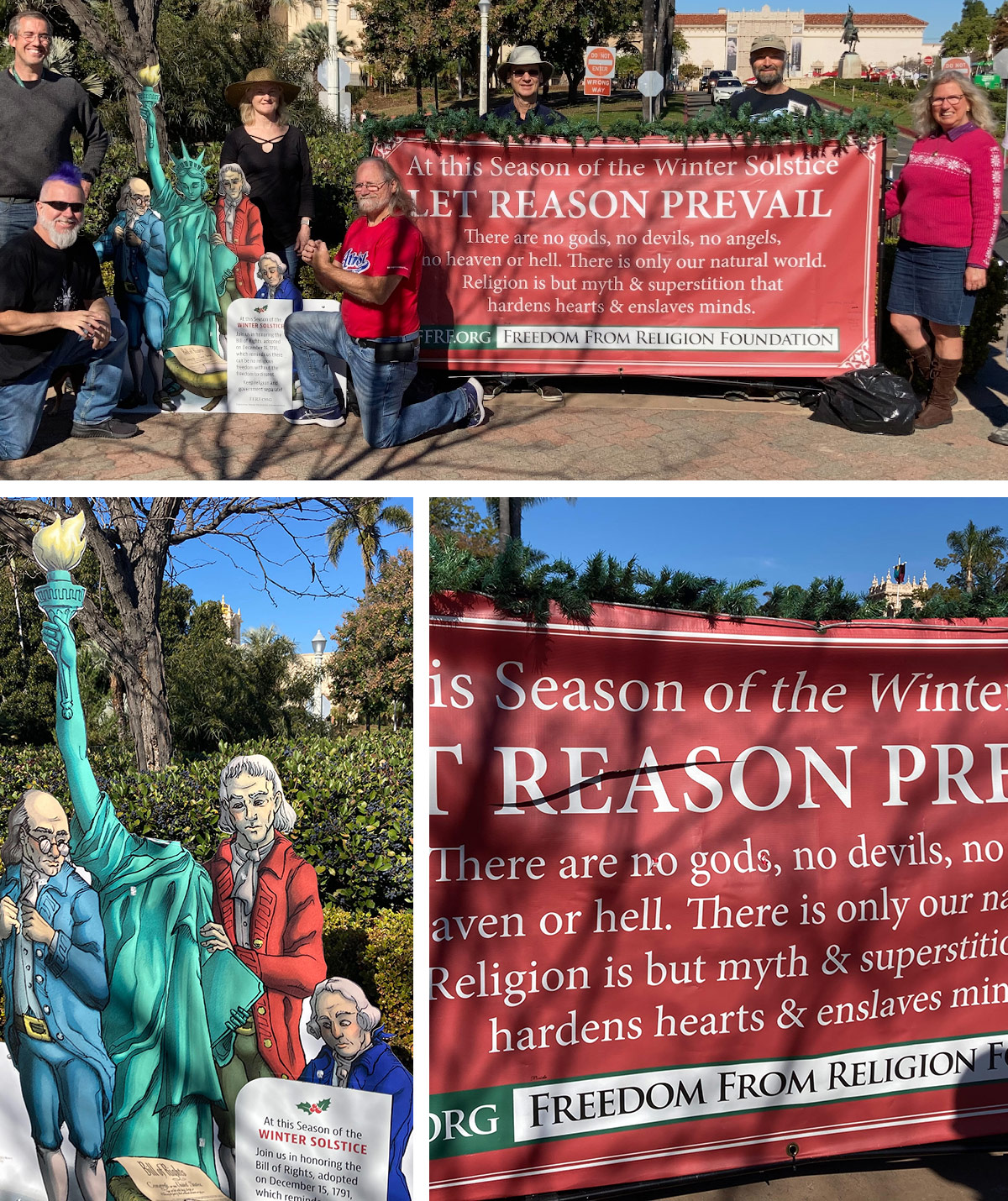 The Freedom From Religion Foundation’s Winter Solstice banner and Bill of Rights “Nativity” at the San Diego Balboa Park were both vandalized in the past week, with Lady Liberty beheaded.

The solstice exhibits, which were to be up till Jan. 4, were erected thanks to a San Diego freethinker. The word “reason” was slashed in a red and white banner saying “Let reason prevail.” The second display, an aluminum 4-foot tall cutout, depicts founding fathers and the Statue of Liberty gazing at a manger holding the Bill of Rights. The text of that display explains:

At this season of the Winter Solstice,
Join us in honoring the Bill of Rights, adopted on December 15, 1791,
which reminds us that there can be no religious freedom without the freedom to dissent.
Keep religion and government separate!

This display celebrated the Bill of Rights, which protects all Americans, and the winter solstice banner represents the viewpoint of the 27 percent of Californians who consider themselves “nones,” as in having no religious affiliation.

FFRF, a national state/church watchdog, and its membership place winter solstice displays around the nation in public parks and spaces to counter religious displays, thus ensuring minority viewpoints are represented.

“The symbolism of the Statue of Liberty being beheaded, particularly close to the one-year anniversary of the Jan. 6 insurrection, is deeply dismaying,” says Dan Barker, Foundation co-president. “We are alarmed that such hostility to a display celebrating the Bill of Rights exists.”

The damaged exhibits cost more than $1,000. FFRF is offering a $2,000 award for information leading to the arrest and conviction of the culprit(s). FFRF also has a “resurrection fund,” whereby every time one of its signs, displays or billboards is defaced, individuals may donate to help replace the damaged displays. Individuals may donate to replace these exhibits at ffrf.org/donate, selecting the “Resurrection Fund” dropdown.

The Winter Solstice, the shortest and darkest day of the year, took place on Dec. 21. This natural holiday signals the return of the sun and the new year and has been celebrated for millennia in the Northern Hemisphere with festivals of light, evergreens, feasts and gift exchanges.

The Freedom From Religion Foundation is a national nonprofit organization with more than 35,000 members and several chapters across the country, including nearly 5,000 members and a chapter in California. Its purposes are to protect the constitutional principle of separation between state and church and to educate the public on matters relating to nontheism.