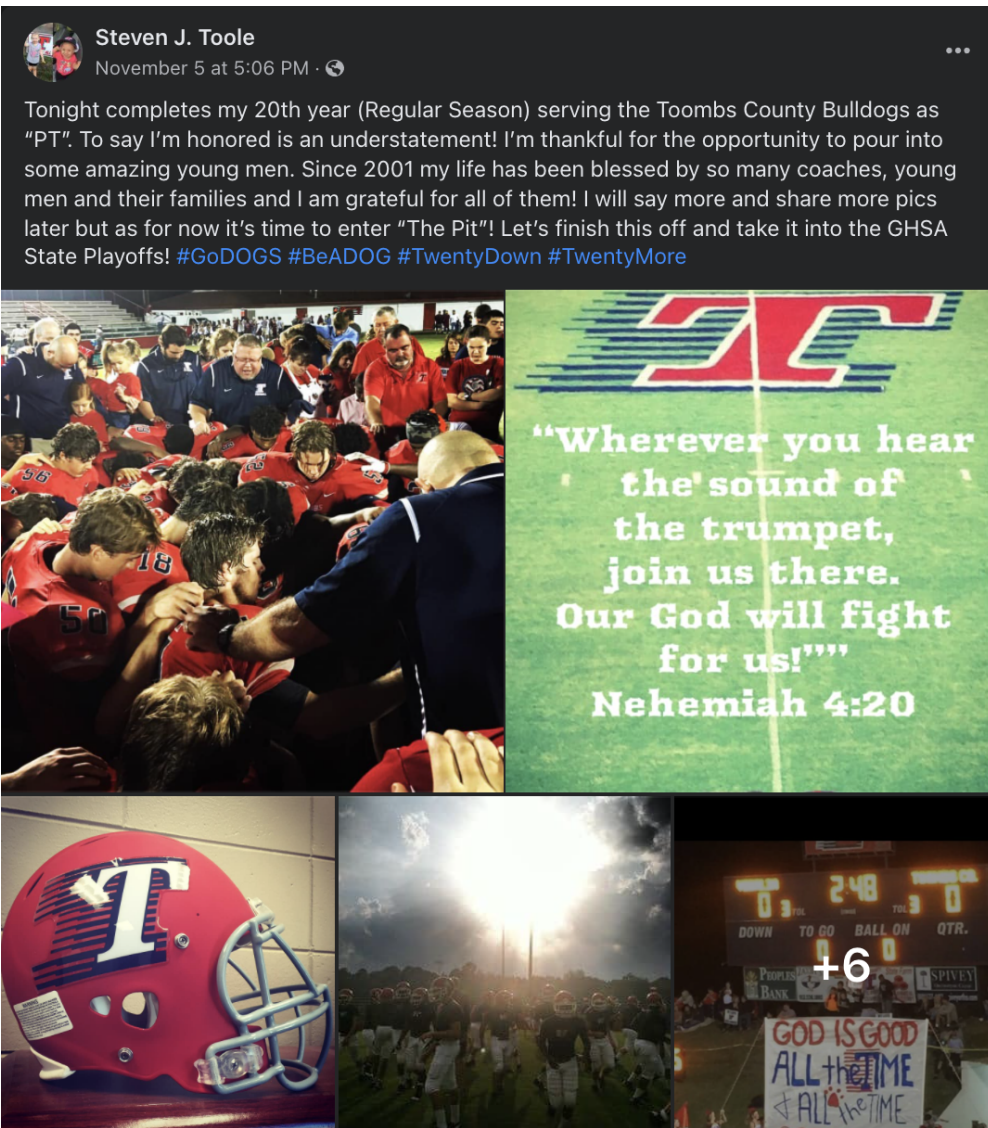 The Freedom From Religion Foundation is yet again calling timeout on a Georgia school district for its multiple violations of the U.S. Constitution.

A local community member has reported to the state/church watchdog that Pastor Steven Toole and coaches have continued to engage in religious activities with Toombs County Schools students, which has been confirmed on multiple social media postings. Toole is listed on the team’s website as “Coach and Team Chaplain.” He also recently posted a series of photos on Facebook showing coaches engaged in prayer with students. FFRF had previously written to Toombs County Schools in 2018 regarding this issue, and in February 2019, the district responded that Toole’s actions with students were not authorized, sponsored or promoted by the district. It seems, however, that the problem hasn’t gone away.

“This conduct is unconstitutional because these coaches are endorsing and promoting religion while acting in their official capacity as school district employees.” writes FFRF Staff Attorney Christopher Line in a letter to an attorney for the school district. “Certainly, they represent the school and the team when they act in their official role as coaches of the Toombs County High School football team.”

Public schools cannot appoint or employ a chaplain, seek out a spiritual leader for students, or agree to have a volunteer teach other people’s children that character centers on religious belief, because public schools may not advance or promote religion, FFRF adds. Toombs County Schools can’t allow nonschool adults access to proselytize the children in its charge, and it certainly can’t grant that access to ministers seeking to grow and target their religious ministries using students, it reminds the school district.

“Toombs County High School officials have a lot of nerve continuing to impose their sectarian religiosity on all of their players,” says FFRF Co-President Annie Laurie Gaylor. “Not only is this unconstitutional, it is also highly presumptuous.”

The Freedom From Religion Foundation is a national nonprofit organization with more than 35,000 members and several chapters across the country, including over 500 members and a local chapter in Georgia. Our purposes are to protect the constitutional principle of separation between state and church, and to educate the public on matters relating to nontheism.