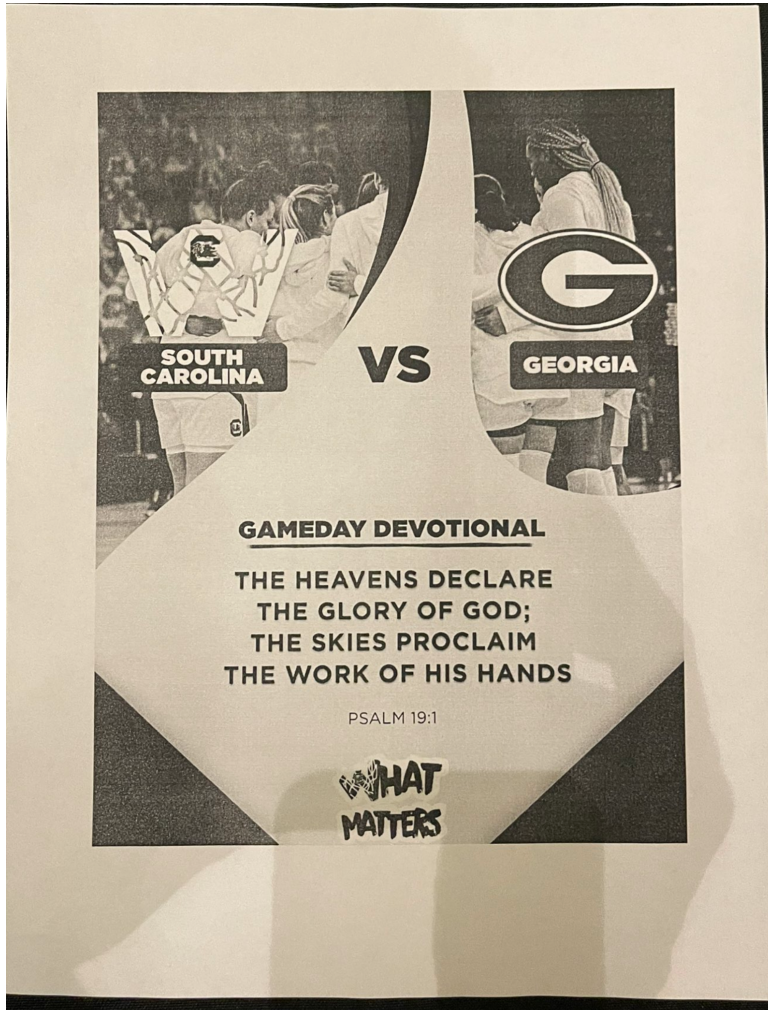 The Freedom From Religion Foundation is calling attention to serious First Amendment violations by the University of South Carolina women’s head basketball coach.

The Freedom From Religion Foundation is calling attention to serious First Amendment violations by the University of South Carolina women’s head basketball coach.

Coach Dawn Staley regularly prepares a “gameday devotional” for players that always features a bible verse. She even shares these religious devotionals on social media and describes each game as "Jesus versus" whichever the team’s opponent is that week. One such verse that was included on a gameday pamphlet was Psalm 19:1, “The heavens declare the glory of God; the skies proclaim the work of His hands.”

The Supreme Court has continually struck down school-sponsored proselytizing in public schools, FFRF informs the university. The federal courts have struck down school prayers because it constitutes a government advancement and endorsement of religion, which violates the Establishment Clause of the First Amendment.

“And in Mellen v. Bunting, the 4th U.S. Circuit Court of Appeals, which has jurisdiction over South Carolina, extended the scope of the aforementioned cases from primary and secondary schools to college-aged students when institutional circumstances create a coercive religious environment,” FFRF Staff Attorney Chris Line writes to Interim President Harris Pastides. “The court found that mealtime prayer at a state military college (VMI) was an unconstitutional violation of the Establishment Clause given the coercive atmosphere. The University of South Carolina’s authority over student athletes is similar to that of VMI in that much of the players’ conduct is closely monitored, directed and critiqued by coaching staff.”

As importantly, the University of South Carolina should not lend its power and prestige to religion, amounting to a governmental endorsement of religion that excludes the 24 percent of the American population that is nonreligious. Nationally, about 38 percent of young Americans, i.e., the university’s students, are nonreligious. That’s why Staley’s religious activities alienate and exclude a significant portion of students.

The state/church watchdog is asking the university to protect its student-athletes from unconstitutional religious promotion and ensure Staley understands that she has been hired as a basketball coach, not a pastor.

“Students should not be pressured to pray to play,” says FFRF Co-President Annie Laurie Gaylor. “Coach Staley is misusing her power and her position as a coach at a secular institution.”

The Freedom From Religion Foundation is a national nonprofit organization with more than 35,000 members across the country, including hundreds of members in South Carolina. Our purposes are to protect the constitutional principle of separation between state and church, and to educate the public on matters relating to nontheism.