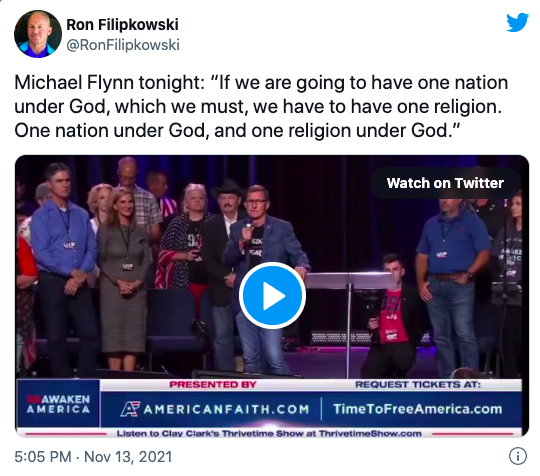 The Freedom From Religion Foundation is decrying conservative rallies for scapegoating atheists and calling for “one religion under God” in America.

The Freedom From Religion Foundation is decrying conservative rallies for scapegoating atheists and calling for “one religion under God” in America.

Speaking at a recent three-day “ReAwaken America” conference, held at Cornerstone Church in San Antonio as part of a national tour, former National Security Adviser Michael Flynn, the keynoter, opined: “If we are going to have one nation under God, which we must, we have to have one religion. One nation under God, and one religion under God.” Flynn reportedly spoke about his Christian faith to refute QAnon claims that he worships Satan. Flynn has been comparing House Speaker Nancy Pelosi to Pontius Pilate in promoting his theory of the “insurrection crucifixion.”

An outright attack on atheists took place in the opening prayer at a Take Back Virginia rally in mid-October, called by supporters of then-gubernatorial candidate Glenn Youngkin, which “focused on a call to arms in a battle against ‘communist atheists,’” according to the New York Times.

The Times, in an article citing many examples around the nation of what it terms is the “menace” created by the “increasingly violent tone” of GOP speech, published a photograph of the prayer. The Times reported that “the urgency of a call to arms was conveyed right from the opening prayer,” when conservative Joshua Pratt “warned of the looming threat of “communist atheists” and said: “Your children are in a battle, and we need your help.”

Those at the rally pledged allegiance to a flag that the participants were told had flown over Trump’s rally prior to the insurrection at the Capitol on Jan. 6.

Although Youngkin declined to attend the rally, former President Trump phoned in. During his call to the Virginia rally, Trump repeated his lie that mass voter fraud stole the 2020 presidential election from him. Other speakers included indicted former Trump White House adviser Steve Bannon. Even though Youngkin did not attend, his campaign associate, Virginia state Sen. Amanda Chase, did. Chase has been censured by the state Senate for promoting election fraud conspiracy theories, including urging Trump to invoke martial law in December to seize voting machines.

The targeting of atheism at this rally and Flynn’s over-the-top attacks on secular government and true religious liberty are part of the increasingly troubling and often violent rhetoric of Christian nationalists, exemplified by U.S. Rep. Paul Gosar’s notorious tweet last week repurposing an anime video showing him brutally killing Rep. Alexandria Ocasio-Cortez and threatening President Biden with two swords. Gosart was one of many Christian nationalist members of Congress who voted not to certify Biden’s election.

The red-baiting bugaboo linking atheists with communism has been exploited to entangle Christianity and the U.S. government. Historically, it was invoked to insert religion into U.S. symbols and money in the mid-1950s. The congressional actions to adopt “In God We Trust” as a belated motto, to require its usage on all currency and to insert “under God” in the previously secular Pledge of Allegiance have had disastrous consequences for America’s reverence and respect for the secular nature of our government.

It is unfortunate that whole generations have grown up reciting a pledge that ironically divides what was once “one nation, indivisible,” and viewing a theocratic motto which turns believers into insiders and nonbelievers into outsiders. As Anne Gaylor, FFRF’s principal founder, always liked to say, “In God We Trust” isn’t even accurate. To be accurate it would have to say “In God Some of Us Trust,” which would be a very silly motto. That’s why FFRF embraces the original motto, E Pluribus Unum (“From many, [come] one”), chosen by a committee of founders.

That union is indeed being menaced by Christian nationalists like Flynn and other theocrats who despise what helps make America great: Our godless Constitution, and a Bill of Rights that protects true religious liberty by barring government from taking sides over religion.