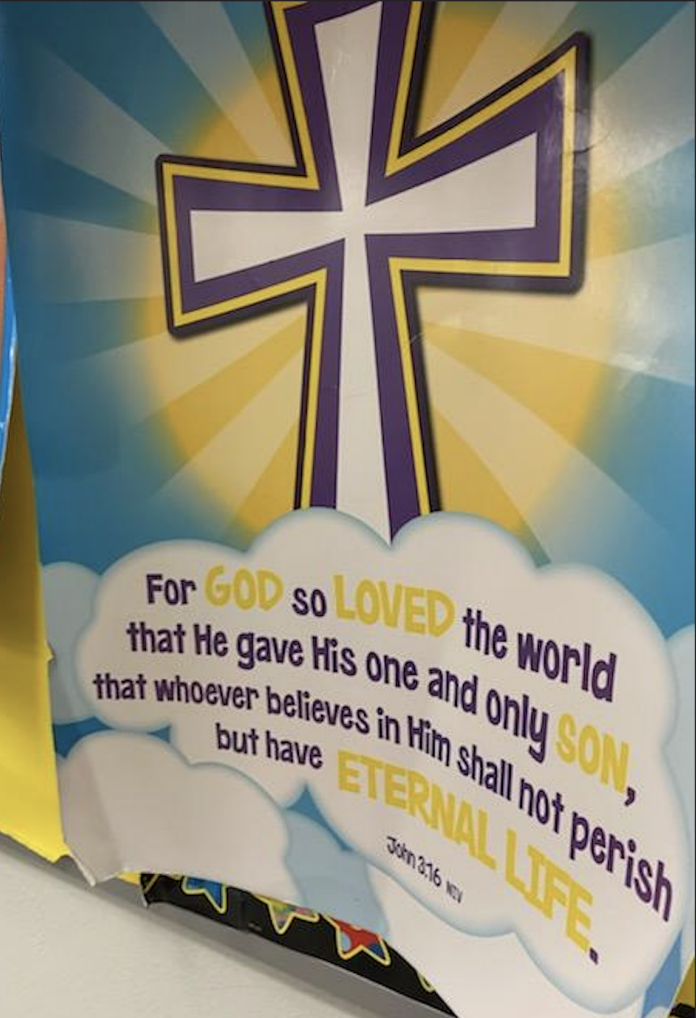 A proselytizing teacher must quit imposing religion on middle school students, the Freedom From Religion Foundation is insisting to a Florida school system.

A concerned parent has reported that a teacher at Bair Middle School in Broward County Schools is displaying multiple religious displays in the classroom, including what appears to be a religious activity participated in by students. One of these displays teaches students how to pray, showing a praying child along with messages like, “Praise God,” “Confess Your Sins” and “Thank God.” Another display is a large cross and the bible verse, “For GOD so LOVED the world that He gave His one and only SON, that whoever believes in Him shall not perish but have ETERNAL LIFE. John 3:16.” Other exhibits include the Lord’s Prayer, a list of books from the Old and New Testaments and a list of “God’s Promises For Kids.” These “promises” include:

“The district violates the Constitution when it allows its schools to display religious symbols or messages,” Staff Attorney Chris Line has written to the school district’s legal counsel. “Public schools may not advance, prefer, or promote religion.”

Courts have continually held that school districts may not display religious messages or iconography in public schools, FFRF reminds the school district. Furthermore, the district has an obligation under the law to make certain that “subsidized teachers do not inculcate religion,” to quote the U.S. Supreme Court.

These religious displays are particularly inappropriate, given that about 38 percent of Americans born after 1987 are not religious, and such displays alienate those nonreligious students, families, teachers, and members of the public whose religious beliefs are inconsistent with the message being promoted by the school. “Broward County Schools must immediately take down these awful religious displays,” says FFRF Co-President Annie Laurie Gaylor. “This teacher is egregiously abusing his or her authority by preaching to a captive audience of young and impressionable students.”

The Freedom From Religion Foundation is a national nonprofit organization with more than 35,000 members and several chapters across the country, including over 1,700 members and the Central Florida Freethought Community chapter in Florida. Its purposes are to protect the constitutional principle of separation between state and church, and to educate the public on matters relating to nontheism.