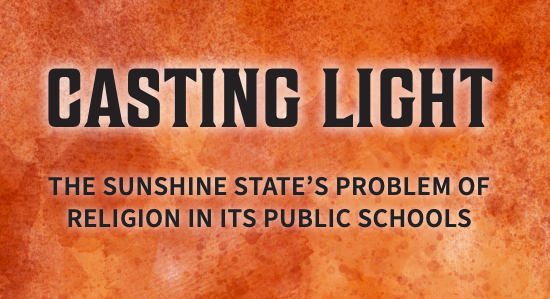 A new report by the Freedom From Religion Foundation is calling attention to the myriad unconstitutional activities taking place in public schools all over Florida — and proposing an easy fix.

“Casting Light: the Sunshine State’s Problems of Religion in its Public Schools” documents serious, systemic Establishment Clause violations in Florida public schools, ranging from teachers imposing their personal religion on students to administrators establishing chaplaincies. The report has been sent to every Florida school district.

“These abuses of power fly in the face of well-established law, but school district employees and officials are taking cues from state officials,” states the state/church watchdog. “Florida state government seems intent on putting Christianity into Florida’s public schools.”

“Casting Light” points to a number of such instances. For example, the Florida Board of Education attempted to amend social studies standards, insisting that “Judeo-Christian values influenced America’s founding ideals and documents.” After a public outcry, the standards were removed, but in last-minute, opaque political maneuverings at a July meeting, the board added “the Judeo-Christian tradition” back into one standard. And after the 2018 mass shooting at Marjory Stoneman Douglas High School, even as the Florida Legislature ignored the pleas of students for meaningful reforms, it passed a law requiring every public school to display the Christian Nationalist motto, “In God We Trust.” With state level leaders like this, it’s no wonder teachers and staff feel comfortable flagrantly violating court precedent to students’ rights of conscience.

FFRF’s report examines typical Florida public school violations reported to FFRF and focuses attention on some of the worst-offending districts. There are 67 public school districts in Florida, and FFRF has received complaints about religious promotion occurring in nearly all of them. Among the worst offenders are Orange County Public Schools (against which FFRF actually filed a lawsuit over censorship of literature), Polk County Schools and Marion County Schools. FFRF also gives an example of one district, Hillsborough County Public Schools, that took proper corrective action.

When FFRF receives complaints directly from affected parents, students and others, FFRF reaches out to district administrators to bring these problems to their attention and engage their cooperation. FFRF asks school districts to investigate the complaints, stop unlawful practices, and educate staff in their district to prevent problems from recurring. “Many districts respond to FFRF complaints by doing exactly that,” notes FFRF Legal Director Rebecca Markert. “But it is rare to receive such cooperation from most Florida public school districts.”

The law is clear, FFRF’s report emphasizes: Public schools must be neutral toward religion. Public school teachers, for instance, may not participate in student-initiated prayer, lead their students in prayer, encourage students to pray or otherwise endorse religion to students. The Supreme Court has also continually struck down prayers at school-sponsored events, including public school graduations and school athletic events. The Establishment Clause prohibits public school boards from scheduling or conducting prayer as part of their meetings. Public schools may not provide religious instruction. The distribution of bibles to students at public schools during the instructional day is prohibited. And public school districts must not allow outside religious groups or individuals school resources or unique access and opportunities to befriend and proselytize students during school events and on school property.

Religious imposition in public schools is unconstitutional and exclusionary, FFRF contends. Currently, 24 percent of Americans are religiously unaffiliated and another 7 percent belong to religious minorities, making nearly one-third of our population non-Christian. Nationally, 21 percent of younger Americans — those born after 1999, i.e., all current public school students — identify as either atheist or agnostic. By ignoring complaints of systemic, unconstitutional religious promotion in schools, Florida school districts are signaling to a significant, growing segment of the community that they are second-class citizens. Even more important, such school districts, by flouting established law and legal precedent, are communicating the wrong lesson to all students, staff and parents, regardless of religious belief or lack of religious belief.

FFRF and its active local chapter, the Central Florida Freethought Community, are eager to assist school districts in adopting policies and practices that respect the rights of conscience of all students and members of the district community. All officials have to do is ask.

The Freedom From Religion Foundation is a national state/church watchdog and the nation’s largest association of freethinkers (atheists, agnostics and other nonbelievers) with over 35,000 dues-paying members, and about 30 staff members, including 10 attorneys. FFRF has more than 1,700 Florida members and a local chapter, the Central Florida Freethought Community (www.cflfreethought.org).