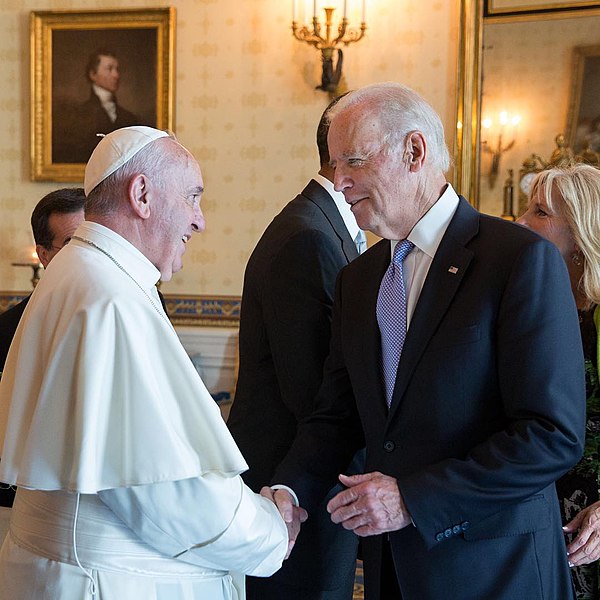 With the pending announcement of a new U.S. ambassador to the Vatican, the Freedom From Religion Foundation is once again urging that this unconstitutional and inappropriate ambassadorship be discontinued.

In a letter to President Biden and Secretary of State Antony Blinken from the organization’s Co-Presidents Dan Barker and Annie Laurie Gaylor, FFRF renews its objections and requests that the U.S. government sever diplomatic ties with a church — not a country — that abuses diplomatic privilege to obstruct justice and progress.

Joe Donnelly is reportedly being picked to be the next envoy to the Holy See. Roman Catholics have exclusively served in this role since the Reagan administration unwisely created the ambassadorship in 1984. Even though the U.S. Constitution explicitly precludes any religious test for public office, if confirmed, Donnelly would become the 12th Roman Catholic to serve as Vatican ambassador.

Congress had even made such a relationship illegal in 1867, deciding that “no money hereby or otherwise appropriated shall be paid for the support of an American legation at Rome.” This wasn’t repealed until President Reagan’s ill-advised move.

FFRF has over time objected strenuously to the creation of an ambassador to the Vatican, calling it an unprecedented entanglement between the government of the United States and the hierarchy of one religion. Official diplomatic relations between our country and the Holy See inevitably prefers and favors Roman Catholicism over other religions and religion over nonreligion. FFRF has challenged the appointments through the years, including Trump’s appointment of Callista Gingrich in 2017.

FFRF contends that the Roman Catholic Church behaves as if it believes itself to be above secular law. It shields criminals, including rapists and war criminals, from secular authorities, and uses its international reach and diplomatic ties to protect them. The Vatican has explicitly relied on this diplomatic status to thwart lawsuits by American victims of priestly abuse and assault. “The Roman Catholic Church has no desire to cooperate with investigations into its finances and crimes and our government is giving that obstinacy power and even immunity by maintaining diplomatic ties,” FFRF states.

The U.S. government, in recognizing the diplomatic status of the Vatican, is aiding this criminality. The United States recognizes papal ambassadors, called “nuncios,” granting immunity to these officials. The nuncios are taking advantage of that status. For instance, during the investigation of child rape and sexual abuse in the Archdiocese of St. Paul in April 2014, Archbishop Carlo Maria Vigano, apostolic nuncio to the United States, reportedly ordered evidence to be destroyed. (Vigano later spoke, via video, at a Dec. 12, 2020, rally to spread Christian nationalism and the Big Lie, a rally that set the stage for January 6.)

The Roman Catholic Church also regularly attempts to interfere with the secular laws of our nation. The Holy See has used its sovereignty to impose religious law upon the citizens of secular states, to meddle in the political affairs of actual nation-states, to maintain the subhuman status of women around the globe, to criminalize abortion, contraception and discriminate against LGBTQ individuals, thwart consensus and progress at the United Nations, and to shield itself from having to answer for the horrific and systemic campaign of child abuse on a global scale and perpetuated for decades.

The Vatican issues absolutist doctrinal decrees, which include official opposition to many human, civil and constitutional rights, such as gay marriage, birth control, abortion, embryonic stem cell research and euthanasia. The church demands that Catholic citizens and Catholic legislators vote en masse, in strict accord with these decrees and in direct contravention of the U.S. Constitution. And, in a disgrace to our secular Constitution and our sovereignty as a genuine nation-state, the U.S. government ostensibly acquiesces in the Roman Catholic Church’s usurpation of its own authority, jurisdiction and sovereignty to govern America.

This unprecedented relationship between the United States and a head of a world religion seriously politicizes the relationship between the United States and one religion. One former U.S. ambassador to the Holy See said when opposing the possibility of nominating a pro-choice Catholic to the ambassadorship, “It’s imperative, it’s essential that the person who represents us to the Holy See be a person who has pro-life values.” There can be no office reserved for a Roman Catholic, much less for an anti-abortion Roman Catholic; doing so is an unmitigated attack on Article VI of the U.S. Constitution, which bars religious tests for public office. Given the attacks on abortion rights in this country right now, it’s shameful that Biden has selected someone who once voted to ban abortion after 20 weeks and to defund Planned Parenthood.

There is simply no legitimate reason for granting Roman Catholicism a special privilege, FFRF asserts. More importantly, granting this privilege to one particular religion over others creates serious First Amendment problems. This can be seen by imagining the backlash if the United States were to grant one branch of Islam this favor. FFRF and its co-presidents therefore urge that the Vatican’s unwarranted special status be terminated.

The Freedom From Religion Foundation, which works to protect the constitutional principle of the separation between church and state, has approximately 35,000 nonreligious members all over the United States.