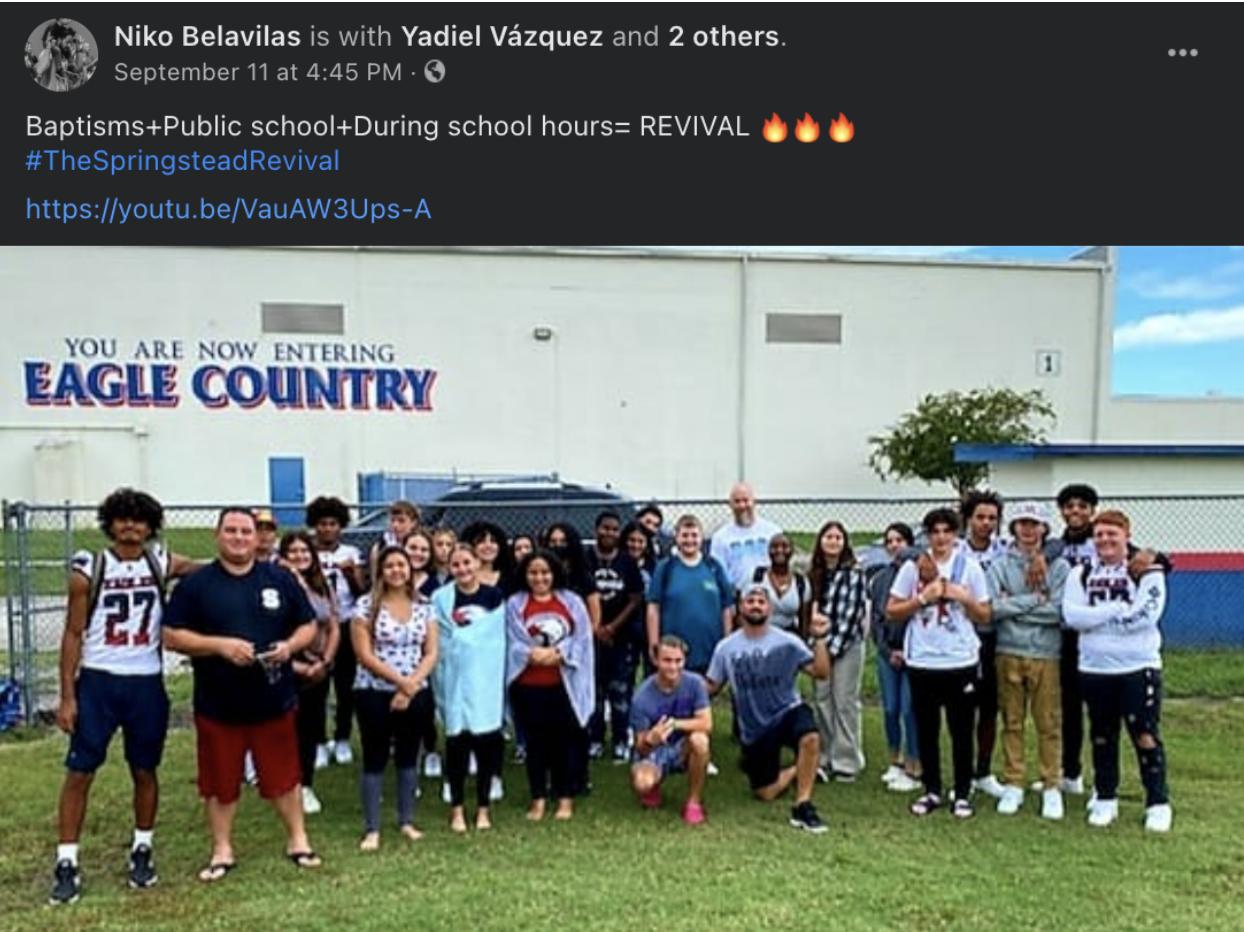 A Florida high school is repeatedly violating the Constitution by utilizing a chaplain who has been proselytizing, praying and even baptizing football players during the school day on school grounds, says FFRF.

Niko Belavilas has posted material on Facebook and YouTube that reveals him regularly engaging in constitutionally out-of-bounds conduct at the Springstead High School. For instance, he is shown leading students in a locker room prayer in a video on Facebook:

“Lord, we just thank You, Father, as You come the whole spirit, and power us, give us focus, give us energy, just give us wisdom, to the coaches, Lord, to the players, just let us talk to You, Daddy. Lead us in our stance and how we should play. Motivate us, inspire us, Lord, to give everything we’ve got every single play that we have no regrets, nothing held back and the name of Jesus will be glorified in this place… And God’s hand was on that team, we declared done, and we are Yours, Father, we give glory in Jesus’ name. Amen.”

“Public school football teams cannot appoint or employ a chaplain, seek out a spiritual leader for the team, agree to allow someone to act as chaplain, or otherwise infuse the team with religion because public schools may not promote religion,” FFRF Staff Attorney Chris Line writes to the Hernando County School District’s legal counsel. “It is therefore inappropriate and illegal for the Springstead High School football team to have a team chaplain and for coaches to allow and participate in religious activities with students, as this signals a blatant promotion of religion over nonreligion generally, and in this case, Christianity in particular.”

This type of aggressive preaching of Christianity at a public school also has the possibility of alienating, isolating, and embarrassing the teachers, students and parents who are either non-Christian or nonreligious, FFRF points out.

This public school is a federal tax-supported institution, FFRF emphasizes. “The Supreme Court has repeatedly held that public schools may not be co-opted, either by staff or outside adults, to proselytize students,” the letter adds.

The Hernando County School District cannot give an adult not affiliated with the school access to the children in its charge, and it certainly cannot grant that access to a religious leader to advance his faith. Belavilas cannot be involved with the team at all going forward, nor may anyone else serve as a team chaplain. Such a blatant disregard for the separation of state and church needs to be stopped immediately, FFRF concludes.

“A public school chaplain is, by the very definition, a huge constitutional penalty,” says FFRF Co-President Annie Laurie Gaylor. “The Hernando County School District needs to get rid of him at once.”

The Freedom From Religion Foundation is a national nonprofit organization with more than 35,000 members and several chapters across the country, including over 1,700 members and a chapter in Florida. Its purposes are to protect the constitutional principle of separation between state and church, and to educate the public on matters relating to nontheism.