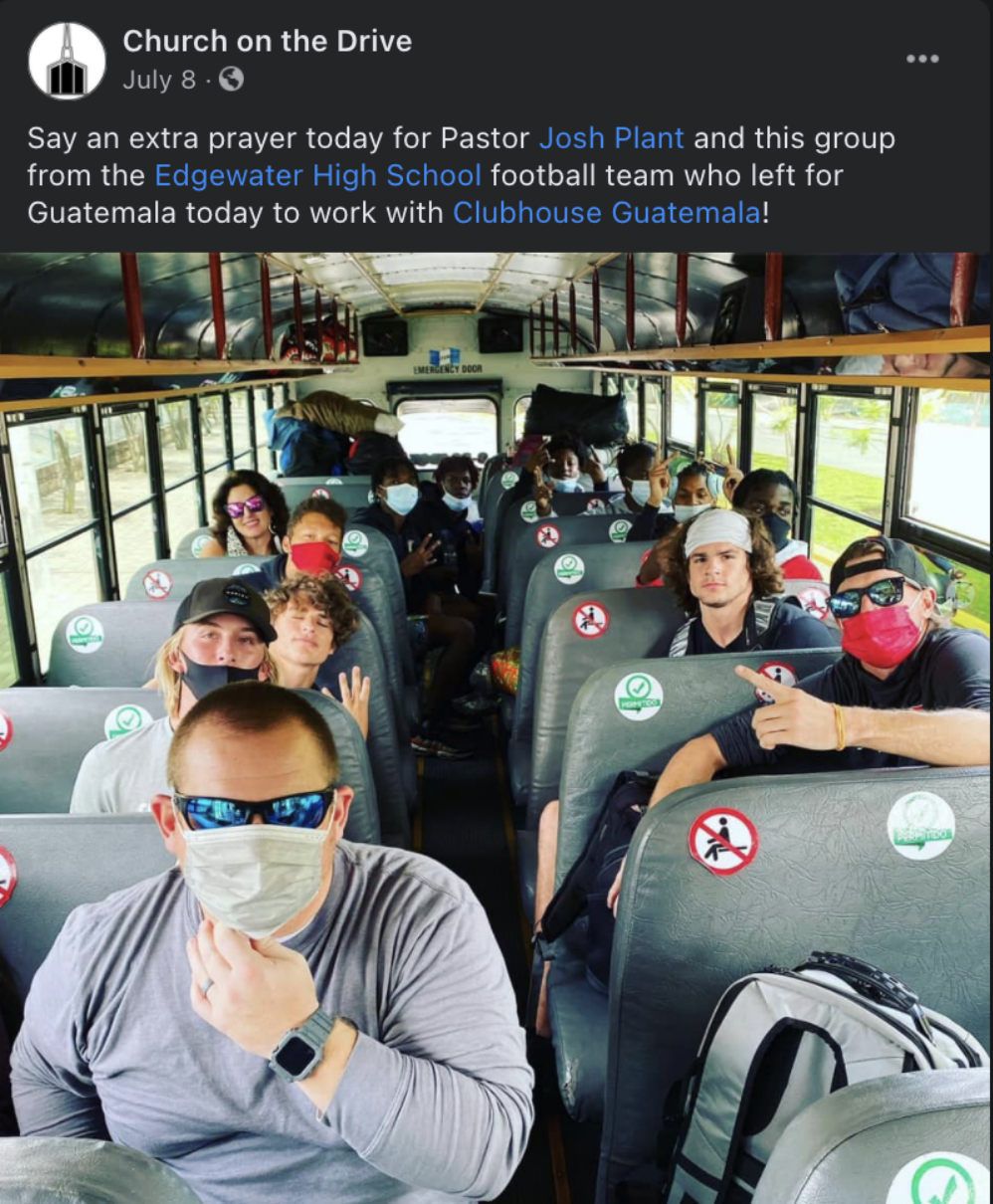 Get rid of your football chaplain and rein in your preachy employees, the Freedom From Religion Foundation is asking a Florida school district.

Get rid of your football chaplain and rein in your preachy employees, the Freedom From Religion Foundation is asking a Florida school district.

A concerned Orange County Public Schools community member has informed the state/church watchdog that Edgewater High School allows Josh Plant to act as its football team chaplain and to proselytize and promote religion to students. Plant’s official title is “character coach,” but he is actually a pastor from Church on the Drive who acts as the team’s official chaplain. Plant and his church recently led a school-sponsored mission trip to Guatemala for students, in which Coaches Mark Duke and Cameron Duke and Athletic Director Josh Vandergrift also participated This was hosted in partnership with Clubhouse Guatemala, “a Christ-centered ministry that desires to reach the lost of Guatemala”  and whose goal “is to love people into a true relationship with Jesus Christ.”

On Aug. 27, Coach Mark Duke appeared with Plant on a Christian radio show where they discussed the trip in detail, as well as Plant’s work as the team’s chaplain. It was revealed that Plant has baptized several members of the football team and regularly leads players in bible studies. Duke stated that his goal is to help students “be the men or women that God has called them to be”, and that’s the “number one priority” of the football program with the team’s coaches and the “team’s chaplain.” The coach even said that the administration understands this to be the goal of the program. He explained:

It’s not just winning games. Yes, we are going to be judged by that by the world, but at the end of the day we know we are called to answer to Our Heavenly Father and what He’s given us the opportunity to do. And we get the chance to use the platform of football to help develop and grow our young people into exactly who God’s called them to be and we are going to do everything we can to do that, and that’s the calling on our life and that’s the calling on the people who are supportive of our program.

Plant admitted that the football program is designed to proselytize and that he tries to convert nonreligious students to Christianity:

One of the founding things in our program is that following Jesus is the best way to live. Right, like, I say that some of the guys sometimes, cause I know some of them don’t believe, and I say look, man, I know, but can I just tell you this? If you’ll do it Jesus’ way, whether you believe or not, if you’ll do it Jesus’ way, you’ll ultimately be better… You’ll ultimately be better in every facet of your life.

“Public school football teams cannot appoint or employ a chaplain, seek out a spiritual leader for the team, agree to allow someone to act as chaplain or otherwise infuse the team with religion because public schools may not promote religion,” FFRF Staff Attorney Chris Line writes to Superintendent Barbara Jenkins. “It is therefore inappropriate and illegal for the Edgewater High School football team to have a team chaplain and for coaches to allow and participate in religious activities with students, as this signals a blatant promotion of religion over nonreligion generally, and in this case, Christianity in particular.”

Orange County Public Schools cannot provide an adult not affiliated with the school access to the children in its charge, and it certainly cannot grant that access to a minister to advance his faith, FFRF emphasizes. The Supreme Court has repeatedly held that public schools may not be co-opted, either by staff or outside adults, to proselytize students. Federal courts have accordingly enforced injunctions against school districts that grant outside adults access to other peoples’ children to evangelize. Furthermore, public school districts have a constitutional obligation to ensure that staff members do not use their positions to proselytize.

And as important to consider in this day and age, nonreligious Americans make up the fastest-growing segment of the U.S. population by religious identification – 35 percent of Americans are non-Christians, including the 25 percent of Orange County residents who identify as religiously unaffiliated. Such a huge segment of the county’s population is being alienated from the public school system.

Orange County Public Schools must investigate this matter and take immediate action, FFRF insists. Plant cannot be the team’s chaplain and should not be involved with the team from now on. Coach Duke must be directed to cease including religion in his football program, and the district should consider terminating him for his egregious conduct.

“The prevalence of Christianity in school sports across Central Florida should be alarming to anyone who values religious freedom,” says David Williamson, Director of Central Florida Freethought Community, the Sunshine State affiliate of FFRF. “Public school employees and volunteers don’t have the right to force their religion onto students — even onto those who share the same faith.”

“It’s alarming that there’s so much official flaunting of religion happening in a public school system,” she remarks. “This must end at once.”

The Freedom From Religion Foundation is a national nonprofit organization with more than 35,000 members and several chapters across the country, including over 1,700 members and the Central Florida Freethought Community in Florida. Its purposes are to protect the constitutional principle of separation between state and church, and to educate the public on matters relating to nontheism.