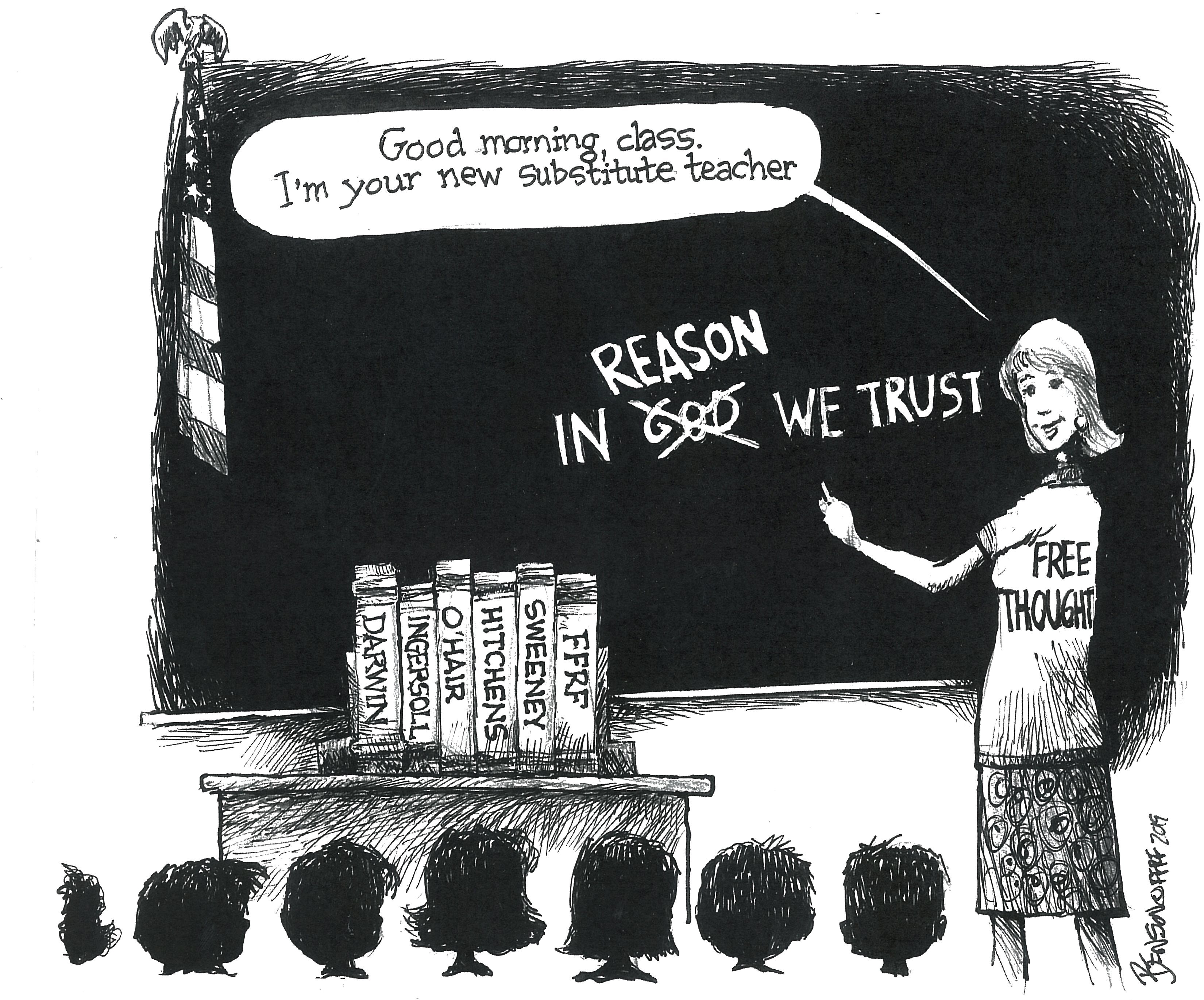 Christian nationalists have furthered their unconstitutional cause in the Granite State.

New Hampshire Gov. Chris Sununu has signed into law a bill prohibiting the state or a school district from “restricting” the display of the U.S. motto

Christian nationalists have furthered their unconstitutional cause in the Granite State.

New Hampshire Gov. Chris Sununu has signed into law a bill prohibiting the state or a school district from “restricting” the display of the U.S. motto “In God We Trust” (or the state’s own “Live Free or Die” motto) in any school building. That bill was authored by a national special interest group committed to advancing Christian nationalism across the country. Christian nationalists demand that we trust in the Christian god, contrary to the U.S. Founders’ and the Constitution’s trust in We The People.

The new law is a slap in the face to the 36 percent of New Hampshire citizens who identify as unaffiliated (“Nones”), whether atheist, agnostic or “nothing in particular.” New Hampshire has one of the higher unaffiliated populations in the nation.

Permitting or requiring public schools or governmental buildings to display “In God, We Trust” is part of the nationwide legislative push known as Project Blitz. This project seeks to inject state legislatures with a whole host of religious bills, imposing the theocratic version of a powerful few. It is an unvarnished attack on American secularism and civil liberties — those things we cherish most about our democracy and now must tirelessly defend.

While politicians claim that these laws are intended to showcase the national motto or inspire patriotism, it is clear that their true purpose is to peddle religiosity to a captive audience. The motto “In God We Trust” is inaccurate and exclusionary — and aimed at brainwashing American schoolchildren into believing that our nation is a theocracy.

An earlier version of the “In God, We Trust” bill had provided that schools and school boards “shall be held harmless for complying with this section.” The fact that this was deleted before passage is an apparent acknowledgment that the law is legally problematic and may lead to public schools being sued for violating the rights of conscience of public school students and their parents... Public schools that erect religious displays, which is coercive, violate the First Amendment rights of their students, inviting costly and avoidable lawsuits.

In addition to the law’s encouragement of New Hampshire schools to violate the Establishment Clause of the First Amendment, its roots in Project Blitz are deeply alarming. Instead of taking actions that will help New Hampshire students succeed and stay safe amid a global pandemic, the legislature is allowing a Christian nationalist outfit to mandate legislation for the state. Project Blitz’s playbook literally calls for states, after passing this law, to begin rolling back hard-fought LGBTQ rights and to expand religious privilege so that a particular type of conservative Christian can claim exemptions from ordinary laws.

It is particularly tone-deaf to tell unvaccinated students, returning to school while Covid-19 cases soar around the country, to trust in the Legislature’s preferred deity and hope for the best. New Hampshire children deserve state officials who live up to their oath to protect the U.S. Constitution, including its guarantee of a secular government and secular public education.