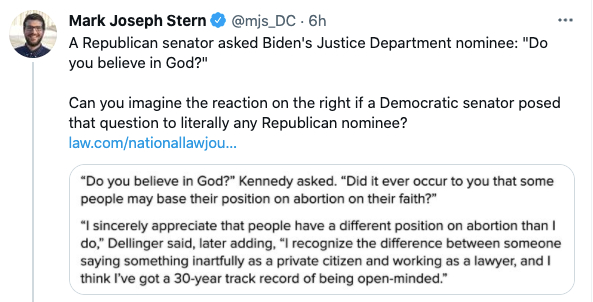 The Freedom From Religion Foundation is condemning the anti-atheist bigotry of the junior senator from Louisiana and is calling on him to apologize to the 30 million atheists and agnostics in America — who number more than Hindus, Jews, Buddhists, Mormons and Muslims combined.

During a Senate Judiciary Committee hearing yesterday, Sen. John Kennedy peppered a federal nominee, Hampton Dellinger, with hostile questions about Twitter, abortion and God. “Do you believe in God?” Kennedy snarled at the

The Freedom From Religion Foundation is condemning the anti-atheist bigotry of the junior senator from Louisiana and is calling on him to apologize to the 30 million atheists and agnostics in America — who number more than Hindus, Jews, Buddhists, Mormons and Muslims combined.

During a Senate Judiciary Committee hearing yesterday, Sen. John Kennedy peppered a federal nominee, Hampton Dellinger, with hostile questions about Twitter, abortion and God. “Do you believe in God?” Kennedy snarled at the nominee.

President Biden has nominated Dellinger for U.S. assistant attorney general for legal policy, a position in the Justice Department that coordinates and develops departmental policy; it is not an advocacy role.

Kennedy was incensed — and let his anger show — because Dellinger had previously tweeted support of abortion rights and how some politicians want “government, not women, to control women’s bodies.” Dellinger had tweeted, “If there were no Republican men in elected office, there would be no abortion bans.”

Kennedy attacked Dellinger, continually interrupting his answers. Dellinger understandably appeared stunned by the grilling and told Kennedy: “I have faith, I believe.” The senator responded: “A lot of people have faith. Did it ever occur to you that some people may base their position on abortion on their faith?”

In fact, as Slate reports, seven ministers sent the Senate a letter of support for Dellinger, whose background is Catholic.

“Politicians like Kennedy seem to believe that atheist-baiting is one of the last acceptable forms of bigotry,” says FFRF Co-President Annie Laurie Gaylor, “However, we know the demographics — and such outdated bigotry is soon going to be a political liability.”

FFRF Co-President Dan Barker, a veteran of nearly 150 debates on religion and the existence of a god, had a lighthearted comment. “Asking ‘which god?’ might have been Dellinger’s best response,” he remarked.

FFRF’s position is that questioning nominees about religion is fair game if nominees have indicated that their personal religious views should trump their secular oath of office. In such cases, senators must ask about religion. FFRF Director of Strategic Response Andrew L. Seidel has written several pieces on this including “Yes, questions of religion can be fair game for Senate confirmation hearings,” for Freethought Now! and “Senators can and must ask about nominees’ religious beliefs,” for Rewire News. Seidel explains that the central question in any Senate confirmation hearing is whether a nominee can uphold her oath of office and treat the Constitution as the “supreme law of the land.” When a nominee has previously claimed that her private faith can trump her public duty, the nominee has made her religion relevant to the inquiry.

Dellinger’s musings on abortion do not fit this criteria. First, abortion is (still) the law of the land and so Dellinger’s beliefs are not in conflict with law or Constitution. Second, he did not raise a conflict between his personal religious beliefs or lack thereof and the law in his writings. Dellinger never made his personal religious beliefs relevant to the hearing or to his potential position at the Justice Department. Nor was such a conflict discovered by the Senate Judiciary Committee.

Kennedy’s attack was pure bigotry and imposed a religious test for public office in violation of Article VI of the Constitution. But this bullying was also a prime example of the senator’s breathtaking hypocrisy. When previous Christian nominees have openly expressed their faith and claimed that they would follow the law of their god rather than the law of our Constitution, Kennedy has been quick to condemn any questioning as religious bigotry, rather than senatorial duty. A brief survey of previous hearings reveals that Kennedy, for example:

The Louisiana senator needs to stop his religious pandering and start showing some respect for the growing number of freethinkers in this country.