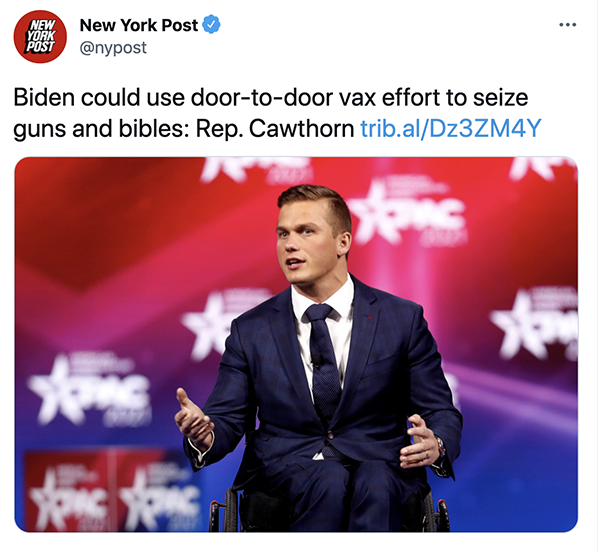 The disinformation campaign against Covid-19 vaccination campaigns is increasing, even though only roughly half the nation is fully vaccinated against the surging delta variant.

This campaign, egged on by Fox News and many Christian nationalist-oriented elected officials, is so pronounced that Dr. Anthony Fauci told CNN last weekend, “If we had had the pushback for vaccines the way we’re seeing on certain media, I don’t think it would have been possible at all to not only eradicate smallpox,

The disinformation campaign against Covid-19 vaccination campaigns is increasing, even though only roughly half the nation is fully vaccinated against the surging delta variant.

This campaign, egged on by Fox News and many Christian nationalist-oriented elected officials, is so pronounced that Dr. Anthony Fauci told CNN last weekend, “If we had had the pushback for vaccines the way we’re seeing on certain media, I don’t think it would have been possible at all to not only eradicate smallpox, we probably would still have smallpox and we probably would still have polio in this country.”

A majority of vaccine-related segments on Fox News over the past two weeks “repeatedly fearmongered about and downplayed the need for continued vaccination campaigns,” according to a report released Friday by Media Matters.

A number of elected officials have been happily joining in the ignorant attack, scaring people over the White House’s promotion on July 6 of door-to-door canvassing. Critics, including Fox News, have twisted this into a scenario of federal agents compelling vaccinations. White House Press Secretary Jen Psaki on July 8 had to clarify that the federal government does not have a vaccination database and that the canvassers would involve volunteers, clergy and “trusted voices in the community.”

Other political voices have formed an anti-vaccine barrage.

“The Biden administration wants to knock on your door to see if you’re vaccinated,” tweeted Rep. Jim Jordan, R-Ohio. “What’s next? Knocking on your door to see if you own a gun?” Rep. Lauren Boebert, R-Colo., shockingly wrote: “Biden has deployed his needle Nazis to Mesa County. The people of my district are more than smart enough to make their own decisions about the experimental vaccine and don’t need coercion by federal agents. Did I wake up in Communist China?” House Freedom Caucus Chair Rep. Andy Biggs, R-Ariz., called it a “blatant abuse of government authority” and Rep. Marjorie Taylor Greene, R-Ga., has termed outreach workers “medical brownshirts.”

“A South Carolinian’s decision to get vaccinated is a personal one for them to make and not the government’s,” said McMaster, who, however, had no problem in February signing a law making personal decisions for women by banning abortions at six weeks. He added: “Enticing, coercing, intimidating, mandating or pressuring anyone to take the vaccine is a bad policy which will deteriorate the public’s trust and confidence in the state’s vaccination efforts.”

Only about 43 percent of South Carolinians are vaccinated, placing the state in the bottom half. The White House has shot back at the governor. “The failure to provide accurate public health information, including the efficacy of vaccines and the accessibility of them to people across the country, including South Carolina, is literally killing people, so maybe they should consider that,” https://apnews.com/article/joe-biden-health-government-and-politics-coronavirus-pandemic-michael-brown-c5c9260bc083e7e9cc0e415caa43879f">Psaki remarked.

In Missouri, shortly after health officials asked for help to deal with the state’s Covid-19 surge, Gov. Mike Parson tweeted: “I have directed our health department to let the federal government know that sending government employees or agents door-to-door to compel vaccination would NOT be an effective OR a welcome strategy in Missouri!”

Parson has had an appalling pandemic record. He never issued a masking requirement but is busy promoting a new law to provide a legal shield against Covid-19 liability lawsuits. He has signed a law placing limits on public health restrictions and barring governments from requiring proof of vaccination to use public facilities and transportation. Parson also took flak for tweeting a photo of himself at a Fourth of July fireworks display in Branson, where less than 30 percent of residents had received at least one Covid-19 shot. It’s about 40 miles from Springfield, where a hospital, Mercy Springfield, has been overwhelmed with patients.

In Florida, which is suffering four times the average number of daily cases of Covid-19 and twice the death rate, Gov. Ron DeSantis is selling anti-vaccine merchandise, such as a T-shirt reading, “Don’t Fauci My Florida.” Rep. Debbie Wasserman Schultz, D-Fla., responded that Floridians are facing “death by DeSantis.”

Irresponsible media, including Fox News and Facebook, as well as recalcitrant public officials must be called out as the “anti-patriots” they are, for deliberately worsening a pandemic we have within our means to end.