Bar a preacher from your schools, FFRF enjoins N.C. district 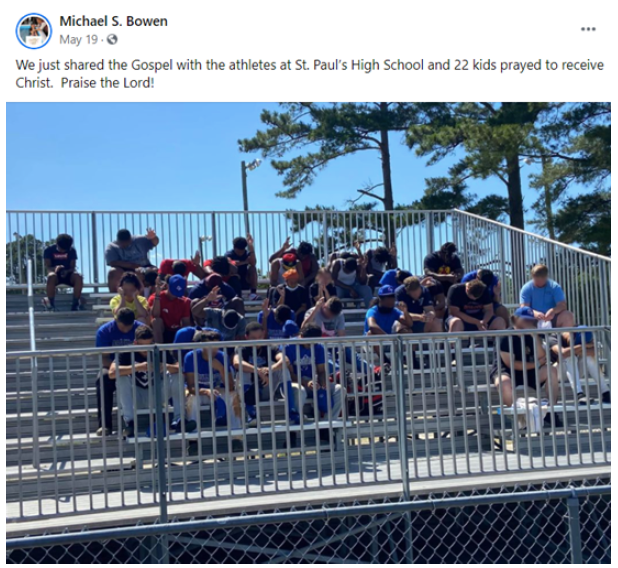 Cease giving a preacher access to your schools, the Freedom From Religion Foundation is pressing a North Carolina district.

A concerned local resident has informed the state/church watchdog that at least three high schools in the Public Schools of Robeson County system recently allowed Michael S. Bowen, a pastor from East Lumberton Baptist Church, to proselytize to students. On May 17, Bowen posted a video of “Tent Revival Evangelist” Tyler Blue proselytizing to students at the Lumberton High School stadium. In the video, Bowen brags, “Here at a public high school sharing the gospel. We’re excited about that.” On May 19, the district permitted Bowen to evangelize students from St. Paul’s High School at the school’s stadium. On May 20, the district authorized Bowen to preach at students from Fairmont High School in the school’s gymnasium. 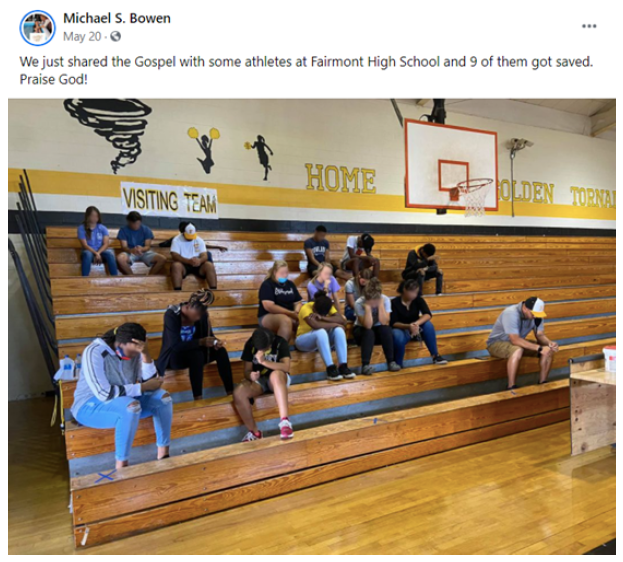 It is inappropriate and unconstitutional for Public Schools of Robeson County to offer religious leaders unique entry to befriend and proselytize students during school activities on school property, FFRF underscores.

“The district cannot allow its schools to be used as recruiting grounds for churches,” FFRF Staff Attorney Chris Line writes to Superintendent Freddie Williamson. “It is well settled that public schools may not advance or promote religion.”

Public schools are not an appropriate place for outside adults to convince students to attend their church, FFRF emphasizes. This recruitment constitutes “a utilization of the tax-established and tax-supported public school system to aid religious groups to spread their faith,” to quote a landmark U.S. Supreme Court decision (McCollum, 1948).

Permitting church representatives regular, or even one-time, access to proselytize to and recruit students for religious activities is a violation of the Establishment Clause, FFRF adds. The courts have protected public school students from overreaching outsiders in similar situations and have granted injunctions against schools for their complacency in such circumstances.

And when a school allows church representatives to recruit students for the church, it has unconstitutionally entangled itself with a religious message — in this case a Christian message. This practice alienates those non-Christian students, teachers, and members of the public whose religious beliefs are inconsistent with the message being disseminated by the school.

FFRF is asking for an investigation of the complaint and an assurance from the district that Bowen (or other religious leaders) are no longer allowed to proselytize to students on school property during school-sponsored events and related activities.

“The school district is failing in its constitutional duty by repeatedly letting a preacher into its schools,” says FFRF Co-President Annie Laurie Gaylor. “It is implicitly endorsing the majority religion — a breach of trust on the part of a secular public school system.”

Photos have been edited to protect the students privacy.

The Freedom From Religion Foundation is a national nonprofit organization with more than 36,000 members and several chapters across the country, including over 800 members and a chapter in North Carolina. Its purposes are to protect the constitutional principle of separation between state and church, and to educate the public on matters relating to nontheism.