Widespread child marriage in U.S. is a secular issue 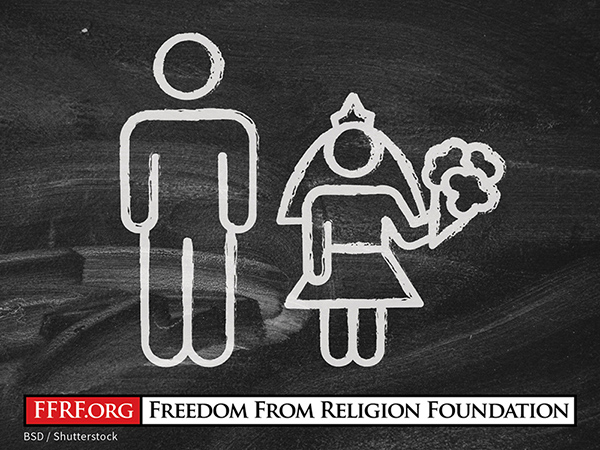 Did you know that minors can marry in 45 U.S. states?

Only this month did Rhode Island join Delaware, Minnesota, New Jersey and Pennsylvania in banning marriage for individuals under 18. All of these laws have just been passed within the last three years. New York, with a child marriage ban awaiting gubernatorial signature, is poised to join these states, while two other states (Illinois and Texas) have been considering such a move. But in most parts of the nation, child marriages are taking place. Ten states do not even specify any minimum age for marriage.

Did you know that minors can marry in 45 U.S. states?

Only this month did Rhode Island join Delaware, Minnesota, New Jersey and Pennsylvania in banning marriage for individuals under 18. All of these laws have just been passed within the last three years. New York, with a child marriage ban awaiting gubernatorial signature, is poised to join these states, while two other states (Illinois and Texas) have been considering such a move. But in most parts of the nation, child marriages are taking place. Ten states do not even specify any minimum age for marriage.

The group adds: “Child marriage is a human rights abuse that produces devastating, lifelong repercussions for American girls, destroying their health, education, economic opportunities and quality of life; and undermines statutory rape laws, often covering up what would otherwise be considered a sex crime. Some 60,000 marriages since 2000 occurred at an age or spousal age difference that should have been considered a sex crime.”

A new study released by the advocacy group shows that almost 300,000 minors were married in this country between 2000–2018, including 1,000 who were 14 or younger and five who were only 10 years old on their wedding days.

Although most minors getting married were 16 or 17 at the time, Unchained at Last warns that minors, who lack adult rights, can be easily forced to marry. In a Catch-22, minors may be forced to marry, but are not “old enough” in many states to file for divorce. Other legal problems attending such married minors include needing guardians to find and approve legal representation, since contracts with children are usually voidable under state law, or even to stay at a domestic abuse or youth shelter. Emancipated minors have limited rights.

Not surprisingly, 86 percent of the children married during this time period were girls, most marrying adult men with an average spousal age difference of four years. When minor boys married, the average age difference was 1.5 years.

While the federal criminal code prohibits sex with a child age 12 to 15, it specifically exempts those who first marry the child. As Unchained at Last points out, “This incentivizes child marriage and implicitly endorses child rape.” In 88 percent of marriages with such age differentials, the marriage license becomes a “get out of jail free” card, the group asserts, because otherwise sexual contact would be considered statutory rape.

New York Times columnist Nicholas Kristof in his latest piece writes about one such incident, involving a 13-year-old impregnated by an evangelical Christian “counselor” decades ago. He cites a 2017 case in which a 11-year-old was forced to marry her rapist in Florida. Kristof writes that the United States is campaigning to end child marriage in Bangladesh and Yemen, yet ignores the problem at home.

These are scenarios straight out of the Bronze Age Old Testament, whose Mosaic law essentially forces rape victims to marry their rapists (Deuteronomy 22:28–29). The bible treats girls and women as chattel and property. Girls go from being the property of fathers to the property of husbands, who, to quote Genesis, “shall rule over” them. In the United States even now, minors who flee an abusive spouse or impending forced marriage are typically considered runaways under state law, can be returned to their homes against their will or in some states, even charged with running away.

And, surprisingly, immigration law doesn’t specify a minimum age to petition for a foreign fiancé or spouse. This permits American girls “to be trafficked for their citizenship and allows for children around the world to be trafficked to the United States under the guise of marriage,” the report states. In 95 percent of such 9,000 petitions involving minors between 2007–2017, the younger party was female.

The Freedom From Religion Foundation wholeheartedly concurs that every U.S. state, territory and district must pass simple, common sense legislation to eliminate any legal loophole that allows marriage before age 18. Many of these marriages are under the color of religious edicts and enclaves. For far too long, religion has demanded to be above the law, but the shocking truth is that religions promoting child brides in the United States are in fact mainly complying with the law.

The United States is one of 193 countries to pledge, under the U.N. Sustainable Development Goals, to end child marriage by the year 2030 to help achieve gender equality. At the rate this legislation is passing here, it will take a lot longer — unless citizens and their state legislators wake up and demand a swift end to this human rights violation.