June a month for LGBTQ+ pride and great concern 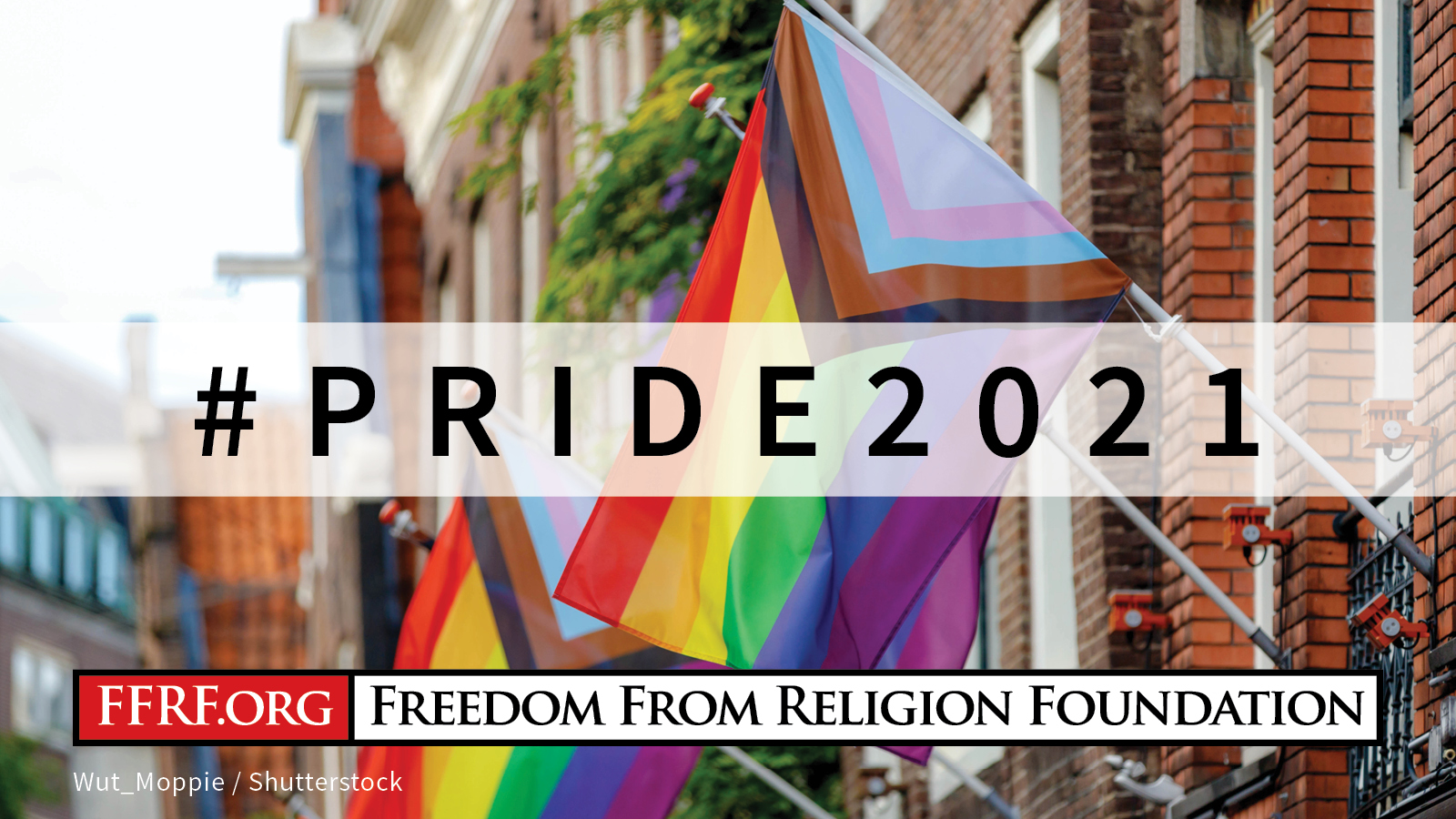 The Freedom From Religion Foundation, nearly 12 percent of whose members identify as LGBTQ+, celebrates Lesbian, Gay, Bisexual, Transgender and Queer Pride Month with the knowledge that even though there’s been much improvement, much is at stake.

As President Biden’s Pride Month proclamation points out, there has indeed been “remarkable progress since Stonewall,” the uprising in June 1969 that sparked the gay liberation movement in the United States. That includes the fact that nearly 14 percent of Biden’s 1,500 agency appointees identify as LGBTQ+, including Transportation Secretary Pete Buttigieg, the first openly LGBTQ individual to serve in the cabinet, and Assistant Health Secretary Dr. Rachel Levine, the first openly transgender person confirmed by the Senate.

However, the House-passed Equality Act, which adds LGBTQ+ individuals as a protected class within the Civil Rights Act, is languishing in the Senate. The Equality Act is vital to equal protection under the law, with more than half our states offering no LGBTQ nondiscrimination protections.

Transgender girls and women are the new scapegoat of the Religious Right and Christian nationalists, with unprecedented numbers of discriminatory bills being introduced and passed by state legislatures. In fact, the hysterical rush to “outlaw” or discourage transgender girls from participating in K-12 sports closely mimicks the wave of anti-marriage equality bills passed a generation ago. It wasn’t so long ago that even progressive politicians often dared not voice support for marriage equality. The anti-gay marriage activity at the state level seemed unstoppable, until the Supreme Court, reflecting the nation’s changing views, issued its historic Obergefell decision six years ago. The phony transgender bills are clearly a backlash against that decision.

Dismayingly, since Obergefell, a 5-4 decision written by Justice Anthony Kennedy, was issued, the composition of the Supreme Court has changed for the worse. Kennedy has been replaced by Brett Kavanaugh and Justice Ruth Bader Ginsburg by Catholic myrmidon Amy Coney Barrett. Today there is a clear 6-3 extremist, Christian nationalist majority on the court.

And as this is written, we await the high court’s ruling on the Fulton case, in which Catholic Social Charities has sued the city of Philadelphia insisting the city must be forced to fork over tax dollars so it can defy the city’s non-bias policy and discriminate against placement of foster children in LGBTQ+ homes. Given the fact that the 3rd U.S. Circuit Court of Appeals had unanimously ruled against the Roman Catholic Archdiocese of Philiadelphia, which runs Catholic Social Services, this can only mean that the high court plans to reverse that ruling. We know the city will lose, we just don’t yet know the extent of the damage until that imminent decision is published.

Biden has yet to speak out on the urgent need to correct and expand the U.S. Supreme Court and federal judiciary, a third of which has been appointed by Trump to Christian nationalist specifications. Perhaps the upcoming Fulton decision will open his eyes to the fact that Trump has already “packed” and “stacked” the federal judiciary, and he needs to act now to counteract that and save true religious and other liberty in the United States. It is a fact that the only organized opposition to LGBTQ+ rights is religious in nature.

There can be no full equality in the United States — or in any state — until its laws and courts are freed from religious control and dogma.