The nation’s future, and our secular republic, rides on defeating voter suppression 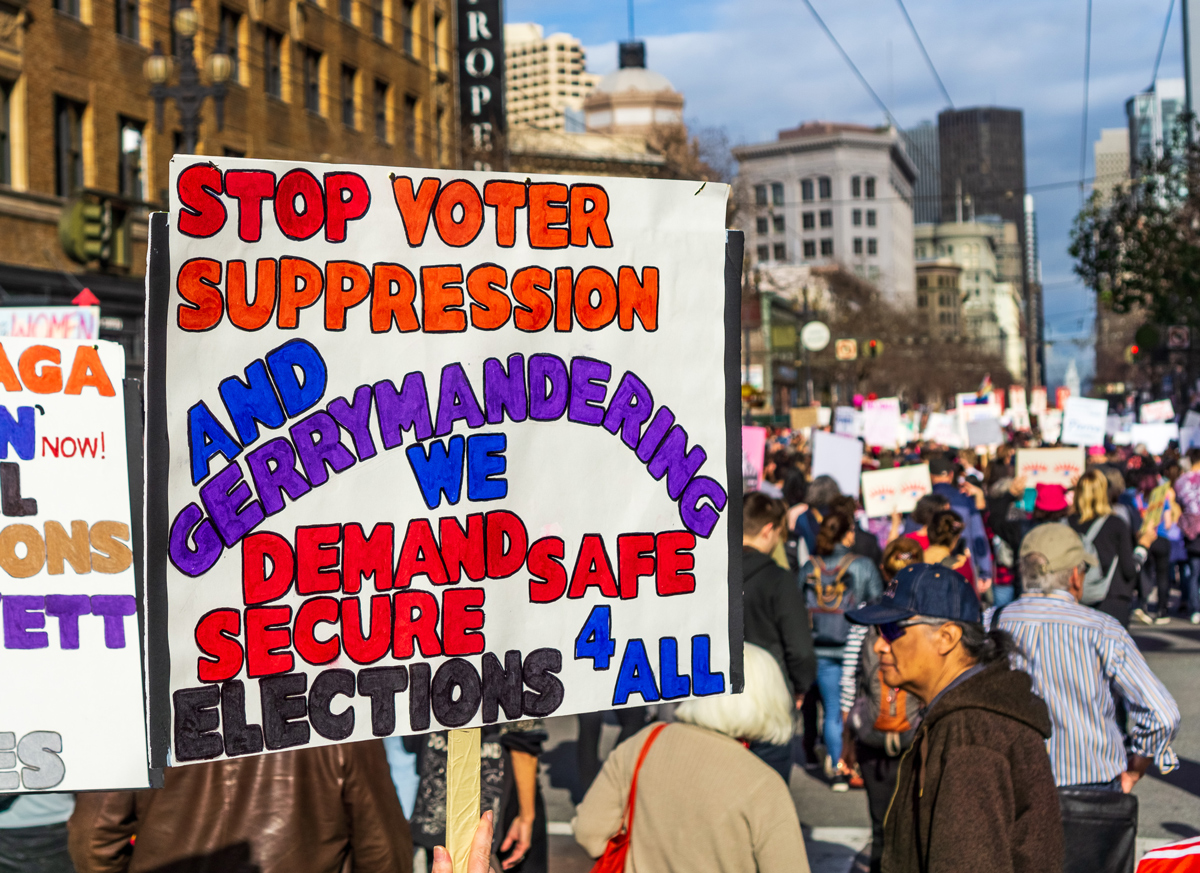 The brazen attacks on citizen rights are snowballing, and freethinkers need to oppose voter suppression.

The Freedom From Religion Foundation has previously pointed out that protecting our democracy is a secular issue. The campaign to defend the principle of separation between state and church is really a way to limit the capture of our government by special interest groups — theocratic religious interest groups. Such entities pose a special danger to our First Amendment and our republic. Reforms that empower people, that extend the franchise to every citizen,

The brazen attacks on citizen rights are snowballing, and freethinkers need to oppose voter suppression.

The Freedom From Religion Foundation has previously pointed out that protecting our democracy is a secular issue. The campaign to defend the principle of separation between state and church is really a way to limit the capture of our government by special interest groups — theocratic religious interest groups. Such entities pose a special danger to our First Amendment and our republic. Reforms that empower people, that extend the franchise to every citizen, will protect and defend our secular democracy.

Since our last comment in March protesting the massive voter suppression bill that passed in Georgia, Florida has followed suit. Texas is trying to pass the same kind of insidious voter suppression. (An initial version of that bill betrayed its agenda, by stating that the purpose was to “preserve the purity of the ballot box.” That language was pulled from Article 6 of the Texas Constitution, drafted after the Civil War to deny Black and Brown Americans the right to vote, which, when pointed out to one of the sponsors during the debate, caused much embarrassment.) As this is written, only a dramatic walkout by dissenting Texas House members has blocked passage of the Texas bill, whose sole purpose is to make voting far more difficult. Other states are conducting highly partisan audits of free and fair elections to promote the Big Lie.

This is just the tip of the anti-democratic, un-American spear. Democracy Docket, a brilliant outfit led by Marc Elias, notes that, as of May 19, “there have been 408 voter suppression bills proposed in state legislatures” and that “25 have been signed into law so far.”

Here’s a deeper look at what’s facing the country:

The voter suppression bills are audacious in their harassing attacks on citizen rights. Obstacles include reducing the number of ballot boxes and drop-off boxes, shortening the period of early voting, adding unnecessary photo ID and other requirements, even making it illegal to give food or water to voters waiting in long lines.

FFRF is proud that 98 percent of our members are registered voters. Yet, there is a deliberate attempt to take away that vote. Voting by mail, which is popular with all ages, but especially with senior citizens, is particularly under attack.

The Freedom From Religion Foundation has documented the role that Christian nationalists and the Religious Right are playing in attempting to repeal, stymy and destroy democratic reforms. We’ve documented their role in promoting and spreading the Big Lie. Voter suppressors are working to preserve their privilege. They see the shifting demographics and realize it means the erosion of their political power so they are abusing that power in a last-ditch effort to preserve it.

“Those who expect to reap the blessings of freedom, must, like men [and women], undergo the fatigues of supporting it,” wrote Thomas Paine in the fourth installment of The American Crisis.* In Dissertation on the First Principles of Government, Paine was a bit less poetic and more realistic. He wrote that “the strength and permanent security of government is in proportion to the number of people interested in supporting it. The true policy therefore is to interest the whole by an equality of rights, for the danger arises from exclusions.”

Our Constitution was built on principles that are inclusive, principles such as “We the People.” Christian nationalists and the Religious Right are seeking to take this country back — back to segregation, to Jim Crow, to a time when White Christian America could ignore the plain language of the Constitution and enjoy political supremacy.

Two important fixes are languishing in the Senate right now: The John Lewis Voting Rights Act, which would undo the Supreme Court’s awful 2013 decision, Shelby County v. Holder, and restore crucial provisions of the 1965 Voting Rights Act; and the For the People Act of 2021, a broad and critical reform bill. Now would be a good time to call your senators (the switchboard number is 202-224-3121) and tell them to move that bill — especially if you happen to be one of our thousand members in Arizona or West Virginia.

Another potential reform is automatic voter registration, an idea whose time has come. Voter registration rates can nearly double when this is implemented (Georgia’s went up 94 percent). Election Day should be a public holiday, as it is in many nations.

It goes without saying that patriotic politicians should be striving to make casting a ballot easier, instead of more difficult. As Ben Franklin famously put it after the Constitutional Convention, the United States is “a republic, if you can keep it.” We’re in grave danger of losing that republic.

*Thomas Paine was remarkably progressive, not just for his time, but even by today’s standards. We don’t think he would object to our amendment to his words. If you’d like to support our work to erect a statue of Paine in Washington, D.C., you may do so here.