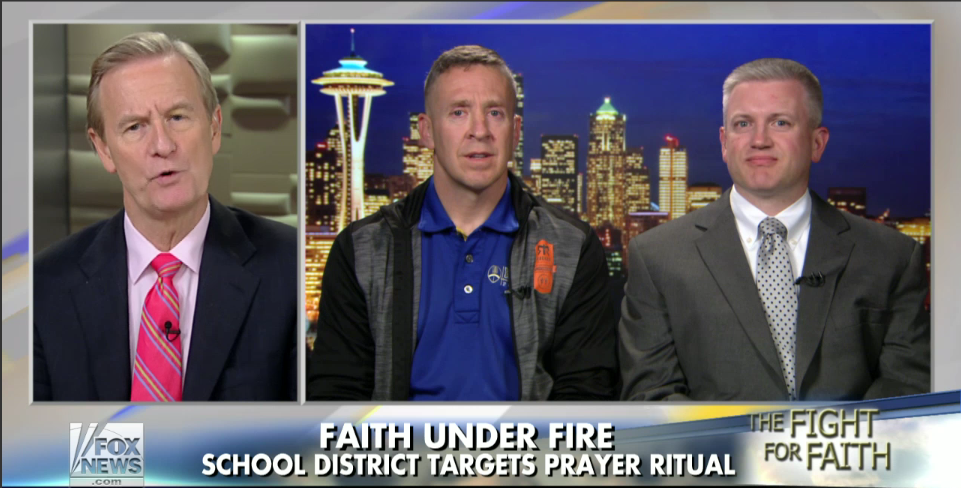 The Freedom From Religion Foundation is applauding a ruling against a praying football coach.

A three-judge panel at the 9th U.S. Circuit Court of Appeals unanimously ruled in favor of Washington’s Bremerton School District, which did not renew the coach’s contract after he refused to stop praying on the job.

Joe Kennedy had been singled out for praise by then-President Trump, including in a speech from the Oval Office on Religious Freedom Day and has been a darling of Christian Nationalist organizations. Kennedy also became beloved among extremist members of Congress, some of whom signed a friend-of-the-court brief on his behalf. Not surprisingly, he was defended by the theocratic Liberty Institute.

The school district told Kennedy that he could not use his position as a school employee to promote religion to a captive audience of students. He was ordered to stop praying with students in September 2015. Kennedy announced that he would pray at an upcoming game despite the district’s order. FFRF backed the district up and asked it to dismiss Kennedy if he continued imposing his beliefs on the students he coached.

After Kennedy defied the school administration’s instructions, he was eventually placed on administrative leave and was not rehired the following year. Kennedy then sued and sought a preliminary injunction against the school system, which was denied by the district court and the 9th U.S. Circuit Court of Appeals.

“Although there are numerous close cases chronicled in the Supreme Court’s and our current Establishment Clause caselaw, this case is not one of them,” wrote Judge Milan Smith in the first paragraph of the opinion, which dismissed Kennedy’s First Amendment and Title VII claims.

The court held that “there is simply no dispute that Kennedy’s position encompassed his post-game speeches to students on the field.” The prayers he led during those speeches were therefore the speech of a public employee rather than a private citizen. The court also held that the school district’s interest in avoiding an Establishment Clause violation outweighed any claim Kennedy had to free exercise of religion. Kennedy had repeatedly declined the school’s efforts to accommodate his religious beliefs and find a way for him to pray privately and “insisted that the only acceptable outcome would be praying immediately after the game on the 50-yard line in view of students and spectators.”

The opinion also took issue with Kennedy’s “media blitz” to get out the word that he was refusing to abide by the school district’s instructions to stop praying with students (and notes that he has continued to make regular appearances on Fox News). The court pointed out that his prayers on the field “cannot be construed as personal and private in the context of Kennedy’s publicity leading up to it.”

FFRF had signed on to an amicus brief submitted by Americans United for the Separation of Church and State in support of the school district in this case.

FFRF praises the decision for upholding the First Amendment.

“The coach has been engaging in pure theocratic grandstanding,” FFRF Co-President Annie Laurie Gaylor comments. “The court rightly set him in his place.”