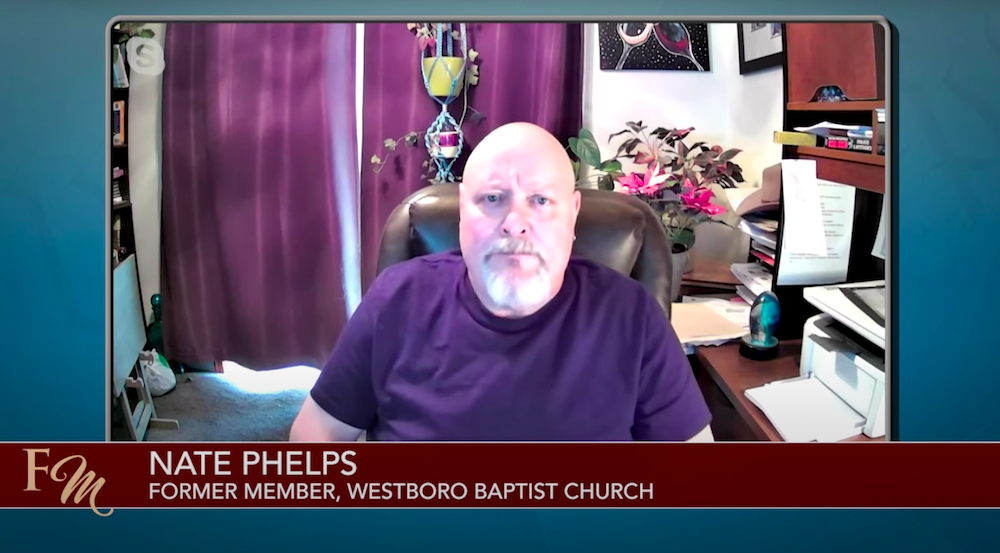 A freethinker who escaped America’s possibly most notorious fundamentalist family is interviewed on the Freedom From Religion Foundation’s TV show this Sunday.

Nate Phelps thought his way out of a notorious family cult that you’ve quite certainly heard of: the Westboro Baptist Church founded by his late father Fred Phelps. The church, classifed by the Southern Poverty Law Center as a hate group, is known for its outrageous and inflammatory slogans, obsessive anti-gay views and picketing of funerals. Nate, who last year received the $10,000 Henry Zumach Freedom From Religious Fundamentalism Award from FFRF, talks on the show about what it was like to grow up in this church and his abusive family and how and why he was able to break away. He tells some pretty shocking stories — and also how he came to embrace freethought despite his upbringing.

“My father believed God was going to, or Christ was going to, return by around the year 2000,” he recounts to “Freethought Matters” co-hosts Dan Barker and Annie Laurie Gaylor. “So I had done the math and I figured, ‘OK, I’ve got another 20 some years. I'm going to live my life on my terms, away from the violence.’ It was safer.”

Previous guests from the fall season include: pundit Eleanor Clift, whose interview you can watch here, actor and FFRF After-Life Member John de Lancie of “Star Trek” “Q” fame, Pulitzer Prize-winning reporter Linda Greenhouse, the country’s leading analyst of the U.S. Supreme Court, and legislative stalwart and feminist and civil rights pioneer U.S. Rep. Eleanor Holmes Norton. One of the most eminent public intellectuals in the world, Professor Steven Pinker, was interviewed a few episodes ago talking about his new course on rationality. Legendary TV host, actor and singer John Davidson was the guest in early December. Recently, the show featured Ann Druyan, the co-creator of “Cosmos,” possibly the most acclaimed TV series of all time. A.C. Grayling, a prominent British philosopher and the author of about 30 books, grappled on the show with philosophy and the pandemic, and discussed how he himself dealt as a nonbeliever with a personal tragedy. And a couple of weeks ago, the show interviewed Robert P. Jones, the CEO and founder of Public Religion Research Institute who is an expert on the intersection of religious and racial extremism.