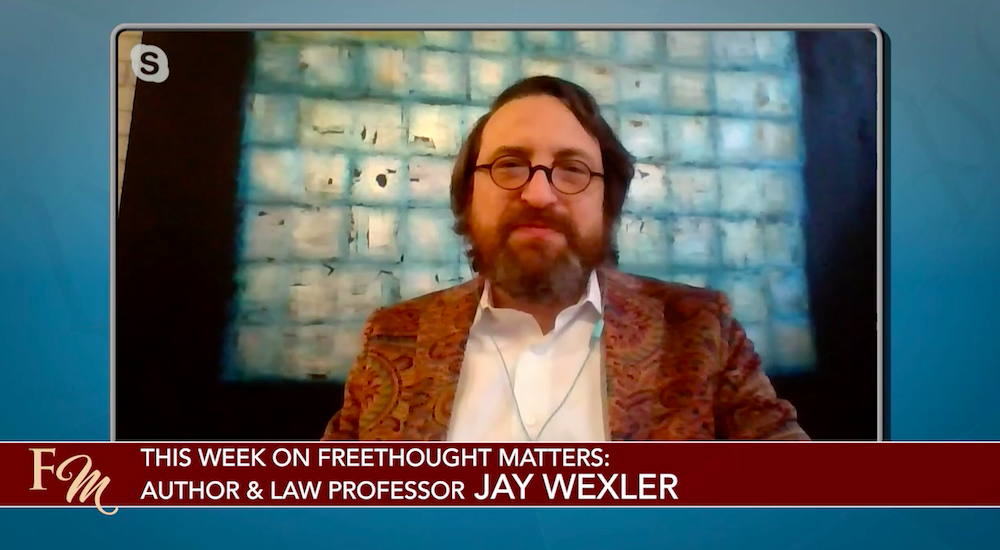 A leading chronicler of the rights of non-Christian Americans who is also an ardent humorist is the guest on the Freedom From Religion Foundation’s “Freethought Matters” TV show this Sunday.

Professor Jay Wexler of the Boston University School of Law and his newest book, Our Non-Christian Nation: How Atheists, Satanists, Pagans and Others Are Demanding Their Rightful Place in Public Life, are featured on the talk show. He embarked on a cross-country adventure (during which he stopped by at the FFRF headquarters in Madison, Wis.) that resulted in a 2009 book called Holy Hullabaloos: A Road Trip to the Battlegrounds of the Church/state Wars. Wexler clerked for Justice Ruth Bader Ginsburg, and his work focuses on state/church issues and constitutional law. He also was the first to study laughter at the Supreme Court.

“If you just look at the data, the demographics are changing, and these days there are fewer and fewer Christians and more people who identify with minority religions or no religion at all,” Wexler explains to “Freethought Matters” co-hosts Dan Barker and Annie Laurie Gaylor the impetus for his latest book. “But beyond that, I think our Constitution very much makes it clear that we’re not a Christian nation, that we’re in fact, a nation where all religions can be exercised freely, but no particular religion can be supported by the state or be our official religion.”

This is the fall season’s 25th episode of “Freethought Matters,” airing in over a dozen cities on Sunday, Feb. 14.

Previous guests from the fall season include: pundit Eleanor Clift, whose interview you can watch here, actor and FFRF After-Life Member John de Lancie of “Star Trek” “Q” fame, Pulitzer Prize-winning reporter Linda Greenhouse, the country’s leading analyst of the U.S. Supreme Court, and legislative stalwart and feminist and civil rights pioneer U.S. Rep. Eleanor Holmes Norton. One of the most eminent public intellectuals in the world, Professor Steven Pinker, was interviewed a few episodes ago talking about his new course on rationality. Legendary TV host, actor and singer John Davidson was the guest in early December. Recently, the show featured Ann Druyan, the co-creator of “Cosmos,” possibly the most acclaimed TV series of all time. A.C. Grayling, a prominent British philosopher and the author of about 30 books, grappled on the show with philosophy and the pandemic, and discussed how he himself dealt as a nonbeliever with a personal tragedy. And a couple of weeks ago, the show interviewed Robert P. Jones, the CEO and founder of Public Religion Research Institute who is an expert on the intersection of religious and racial extremism.