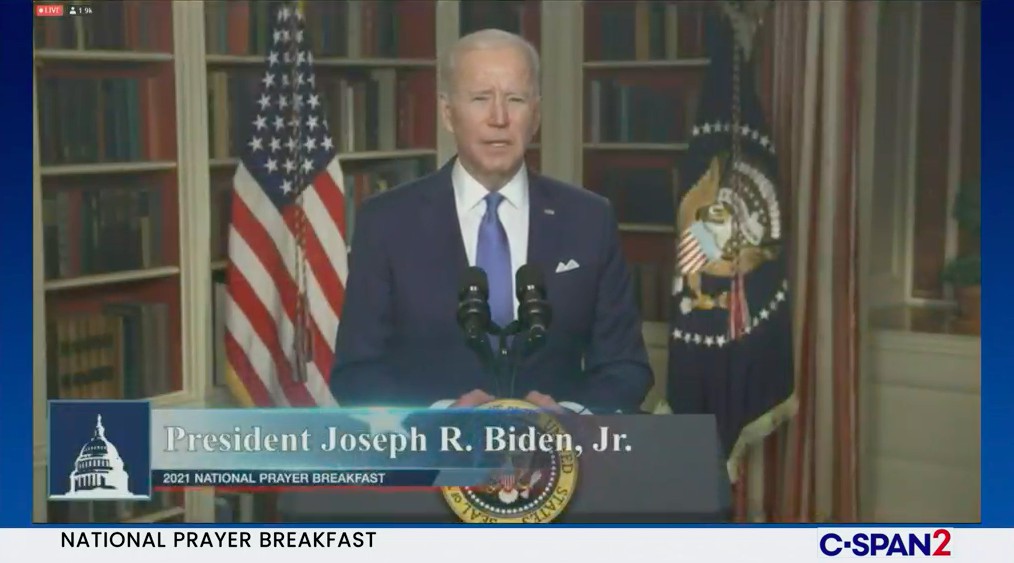 In a misbegotten attempt at bipartisanship, President Biden has continued the lamentable presidential tradition of legitimizing the sectarian annual National Prayer Breakfast.

Biden was in virtual attendance from the White House for the dubious quasi-official prayerfest today (on Thursday, Feb. 4). The president asked for unity and courage and exhorted the country to take on political extremism — all of which he could have done at a secular venue.

Unfortunately, Biden also ventured into religious clichés: “For so many in our nation, this is a dark, dark time,” Biden told those watching the event. “So where do we turn? Faith.”

“As Twain said, ‘Faith is believing what you know ain’t so,’” she remarks. “As we’ve seen in this pandemic, science is where we have turned, and faith has often gotten in the way.”

The Fellowship (also known as “The Family”), which puts together the jamboree, is the subject of an acclaimed Netflix series based on an investigative book by journalist Jeff Sharlet, The Family: The Secret Fundamentalism at the Heart of American Power, who has spoken at FFRF’s annual convention and appeared on its TV show. His work has revealed that the annual breakfast is the outward face of a rather sinister evangelical organization.

And the U.S. government’s role in arranging the get-together has always been less than transparent. Although the National Prayer Breakfast is technically sponsored by the private Fellowship Foundation, which is dedicated to “the teachings and precepts of Jesus,” the nation’s lawmaking body plays a key role. “The U.S. Congress hosts the National Prayer Breakfast, and the Christian organization, The Fellowship Foundation, organizes the event on their behalf,” a website revealed for the 2017 event.

The gathering this year was, of course, upended due to the pandemic, with the official website completely out of date. But that didn’t stop the breakfast from virtually moving forward — and the president of a secular country validating it with their presence.

Sadly, the National Prayer Breakfast has long been bipartisan, and the tradition seems to have continued this year. Sen. Chris Coons, D-Del., facetiously asserted that the event is “an inclusive and positive” one that “recognizes the teachings of Jesus but is not limited to Christianity.” And the headliner was none other than the nation’s commander in chief — from a party that is supposedly more secular. In addition to marginalizing nonbelievers, FFRF contends, the (virtual) presence of the leaders of our executive branch at a shindig organized by such a cultish organization makes it appear as if the U.S. government approves of a fringe movement within one particular religion. The National Prayer Breakfast makes a mockery of our secular Constitution — and serves to undermine our political system, as well.

“Biden should have chosen to skip the event,” adds Gaylor. “Too bad they chose to endorse a constitutionally suspect occasion organized by a shady organization.”

Others are joining FFRF in criticizing the breakfast, including Norman Solomon, co-founder and national director of the progressive activist group RootsAction, who said: “We don’t need any unity with bigotry. I fear a subtext of this engagement is, ‘Can’t we all get along.’ But that’s not appropriate in this case, given the well-known right-wing and anti-gay background of the event’s sponsors.”

The Freedom From Religion Foundation is a national state/church watchdog organization with more than 33,500 nonreligious members and several chapters all over the country.