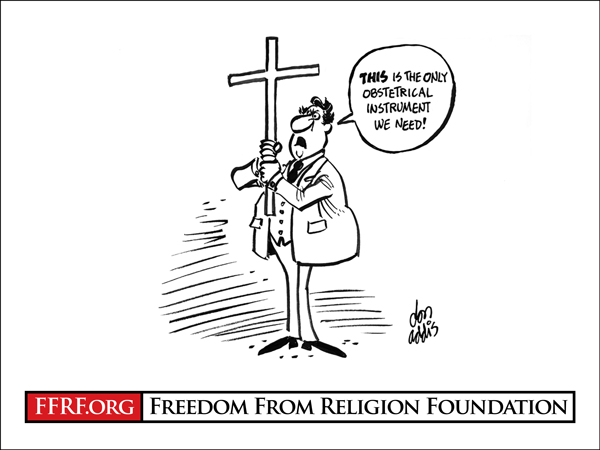 The Freedom From Religion Foundation applauds the Biden administration for revoking the draconian global gag rule that denied U.S. funding to foreign nongovernmental organizations providing any information, counseling or care about abortion.

President Trump had signed an executive order imposing the global gag rule on his fourth day of office. It’s laudable that President Biden, in his second week of office, has lifted it.

First implemented by President Reagan in 1984, when it was known as the Mexico City Policy, it imposes anti-abortion worldviews on not just the United States, but the entire world. This rule, which has either been implemented by every Republican president or revoked by every Democratic president since Reagan, was expanded in 2017, when Trump applied it to any U.S. global funding, including organizations that provide HIV and AIDS programs and services. It has blocked critical funding for services like maternal health, contraception and HIV prevention in 32 countries and some 50 projects that provide essential health care to underserved communities.

The Helms Amendment already restricts any U.S. foreign assistance going to fund abortions. The gag rule has blocked aid to foreign organizations that use their own (non-U.S.) funds to provide information or referrals, or services for legal abortion, or that advocate for access to abortion services in their own countries. According to Planned Parenthood, this has dismantled general health services in a number of communities.

The horrific impact of the global gag rule has been staggering. Studies have shown that the rule is not only ineffective and dangerous, but that it is counterproductive because it can triple abortion rates. Since many of these clandestine abortions are conducted in unsafe conditions, women needlessly die because of this terrible imposition. In fact, there are nearly 68,000 maternal deaths globally per year from unsafe abortions, with 99 percent of them taking place in developing countries.

FFRF believes that everyone should be able to receive comprehensive health services free of religious interference, and fact-based information. The Biden administration’s reversal of the global gag rule is a necessary step in that direction. The Freedom From Religion Foundation celebrates this important moment for women’s reproductive rights, human rights and secular values.