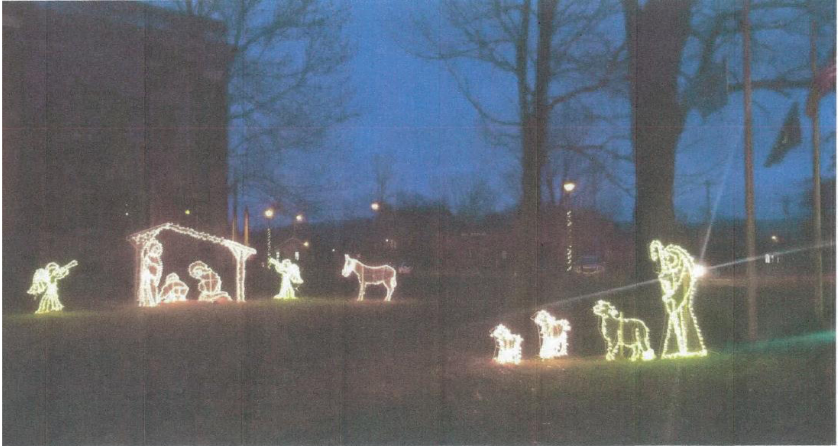 The Freedom From Religion Foundation has filed a friend-of-the-court brief asking an appeals court to rule that a Nativity display at an Indiana county courthouse is unconstitutional.

A U.S. district court judge earlier this year ordered that the Christmas-timed exhibit be discontinued at the Jackson County Courthouse lawn. The county decided to appeal the decision, represented by Liberty Counsel, an organization that the Southern Poverty Law Center considers a hate group.

FFRF’s brief before the 7th U.S. Circuit Court of Appeals argues that the longstanding principles of Establishment Clause jurisprudence still govern Nativity scene displays and that it is unconstitutional under the Supreme Court’s Lynch and Allegheny cases. Removing the display is not hostile to religion but quite the contrary, FFRF contends.

“For nonreligious and minority religious residents of Jackson County, the prominent display of a Nativity scene on government property each and every December is anything but neutral,” the brief states. “It conveys a message of exclusion and secondary status, which is renewed each year when the Nativity is installed.”

The state/church watchdog is advising that this Christian holiday exhibit be scrapped.

“Ending the annual, seasonal display of the Nativity scene in front of the Jackson County Courthouse does not convey hostility to Christianity, but rather embraces neutrality, protecting the diversity of religious beliefs, and the constitutional rights, of all Jackson County residents,” FFRF counsels.

The federal judge’s ruling stems from a lawsuit filed in 2018 by Rebecca Woodring, an atheist, asking the court to rule that the Nativity scene violated her civil rights. In its appeal, the county is speciously contending the display is part of a broader display that is not exclusively religious. The county has also mistakenly argued that ending the exhibit would demonstrate hostility to religion, an assertion FFRF skillfully counters. “Any action taken by Jackson County to correct this constitutional violation would not be hostile to religion, but restore government neutrality towards religion, as the Establishment Clause requires,” it says in its brief.

FFRF concludes by declaring that the district court ruling must be affirmed. “The Establishment Clause of the First Amendment to the Constitution demands governmental neutrality among religious faiths, and between religion and nonreligion,” the brief proclaims.

The Freedom From Religion Foundation is a national nonprofit organization with more than 32,000 members across the country, including over 400 members in Indiana. FFRF’s purposes are to protect the constitutional principle of separation between state and church, and to educate the public on matters relating to nontheism.