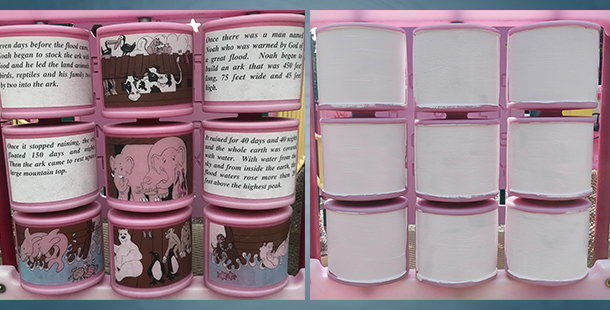 The Freedom From Religion Foundation has persuaded a Massachusetts town into removing a religious display from a library playground.

A concerned community member contacted FFRF to report that the Ashburnham Library playground featured a turning picture game describing the biblical tale of Noah and the Ark. Each section of the turning game contained a passage from the genocidal tale, which was paraphrased from the book of Genesis in order to be more easily understood by young children. For instance, one section read: “Once there was a man named Noah who was warned by God of a great flood. Noah began to build an ark that was 450 feet long, 75 feet wide, and 45 feet high.”

Federal courts have held displays of religious symbols on public property to be an unconstitutional endorsement of religion, FFRF stressed.

“It is settled that permanent displays on public land are government speech,” FFRF Staff Attorney Madeline Ziegler wrote to Ashburnham Board of Selectmen Chair Leo Janssens. “It makes no difference whether this part of the playground was donated to the city. As a permanent fixture, observers understand that the display is sanctioned and approved by the city.”

The display of this vengeful biblical tale on public property conferred government endorsement of religion, FFRF added. It was especially troublesome that this display was aimed squarely at young children using the public library. The government should not be using public grounds to promote bible stories to the most impressionable members of society, FFRF emphasized.

The town must remove this Noah’s Ark display from the playground and refrain from approving any such displays in the future, FFRF insisted.

“Thank you for bringing this matter to the town’s attention,” Ashburnham Town Administrator Brian Doheny recently emailed the state/church watchdog. “In response to your letter, the town has painted over both sides of the display with white paint so that no symbolism is shown (see attached pictures).”

“We’re pleased the town realized that allowing biblical preaching to children at a public institution isn’t in keeping with our nation’s secular ideals,” says FFRF Co-President Annie Laurie Gaylor. “Enlightened parents today regard the tale of Noah’s Ark — in which a barbarous deity mercilessly drowns nearly all human beings and other living things — as a totally inappropriate story to expose small children to. What makes it worse is that many Americans believe it is literally true.”

The Freedom From Religion Foundation is a national nonprofit organization with more than 32,000 members across the country, including over 600 members in Massachusetts. Its purposes are to protect the constitutional principle of separation between state and church, and to educate the public on matters relating to nontheism.