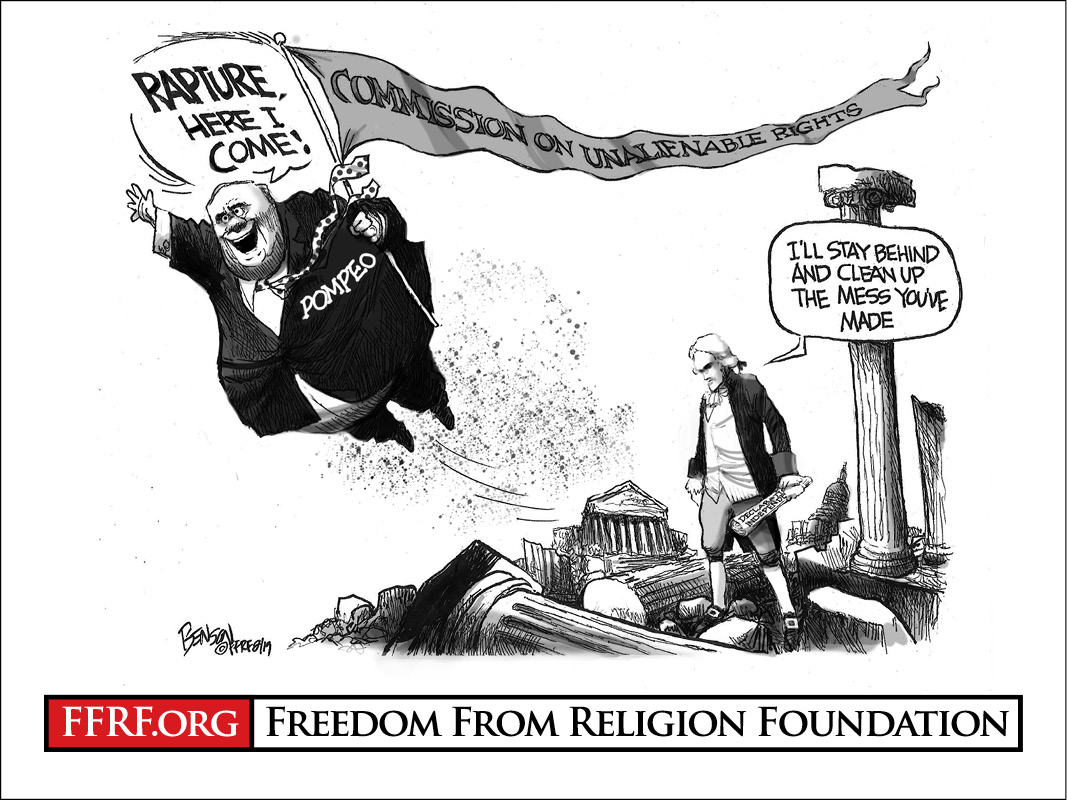 Secretary of State Mike Pompeo’s Commission on Unalienable Rights produced a report today asserting that religious beliefs are more important than other peoples’ rights. The Freedom From Religion Foundation condemns this report and its flagrant attempt to elevate the rights of believers above the rights of others.

Secretary of State Mike Pompeo’s Commission on Unalienable Rights produced a report today asserting that religious beliefs are more important than other peoples’ rights. The Freedom From Religion Foundation condemns this report and its flagrant attempt to elevate the rights of believers above the rights of others.

The report is Christian Nationalism in print and stamped with government authority, granting the State Department permission to conduct a Christian Nationalist foreign policy. That means not supporting the rights of the LGBTQ community, giving Christian Nationalists a blank check to proselytize, restricting access to HIV/AIDS medications and abortion, and permitting the direct funding of houses of worship abroad.

For instance, the report argues, “Protestant Christianity, widely practiced by the citizenry at the time, was infused with the beautiful biblical teachings that every human being is imbued with dignity and bears responsibilities toward fellow human beings, because each is made in the image of God.” Of course, the idea that all humans have worth and value cannot be claimed by one religion and is repudiated with disturbing regularity in the bible this Commission seems to have failed to read. The bible condones and justifies slavery, subjugates women, and mandates death for LGBTQ people and anyone who exercises their right to religious freedom. Religion, Christianity and the bible are not bastions of human dignity. Rather, they favor adherents above all others — belief in the “correct” god is all that matters.

The report also claims that a belief in God is a prerequisite for religious freedom, mistakenly attributing this belief to the Framers: “The Madisonian view of religious liberty — like the view to which Jefferson gave expression in his Virginia Bill for Religious Freedom — proceeds from a theistic premise about the sources of human dignity even as it denies the state the power to dictate final answers about ultimate matters.”

Pompeo once described politics as “a never-ending struggle . . . until the rapture.” This report is both political and highly religious. The report’s dangerous conclusion is based on the flawed premise that all human rights “came from our Lord,” as Pompeo told a group of conservative women last fall. This common Christian Nationalist talking point is based on a misreading of the Declaration of Independence, which states that “all men” are “endowed by their Creator with certain unalienable Rights.” Pompeo’s name for this commission tipped his hand from the outset, showing his intent to misuse this phrase to justify trampling others’ rights in the name of his religion.

In fact, the above phrase from the Declaration of Independence was nothing more than a rhetorical flourish. And it wasn’t even penned by Thomas Jefferson, the declaration’s primary author. The famous Deist wrote in his draft, later altered by others, that “all men are created equal & independent.”

More important, the Declaration of Independence is the wrong place to look for the source of our rights. America’s Founders made their views on fundamental rights perfectly clear in the document that provides those rights: the U.S. Constitution. In the world’s first godless national charter, the U.S. Framers invented the formal separation of religion and government. The Constitution’s only references to religion in government are exclusionary, including bars on religious tests for public office (in Article VI) and on any law “respecting an establishment of religion, or prohibiting the free exercise thereof; . . .” (in the First Amendment).

The first liberty guaranteed by the Bill of Rights — the Establishment Clause of the First Amendment — is the right to a secular government. This guarantee is an American original and directly undercuts the Chrstian Nationalist assertion that our rights rely on a deity. The idea of God-given rights is un-American and is dangerous, as the Freedom From Religion Foundation has championed repeatedly.

“God-given rights are fragile,” says FFRF’s Director of Strategic Response Andrew L. Seidel, one of the attorneys who has written about this fallacy. “God-given rights can be taken away by humans claiming to speak for that god, while human rights — rights that we possess by virtue of our shared humanity — are much stronger.”

Rights are not given by supernatural beings; they are asserted. Not only is our freedom not a gift from God, it is guaranteed by a godless document, the U.S. Constitution. The report from Pompeo’s commission is antithetical to this American principle, and is thus un-American in its quest to give government sanction to favored religious beliefs. Our country was founded in large part to reject exactly this notion, and this report must be given the same treatment.