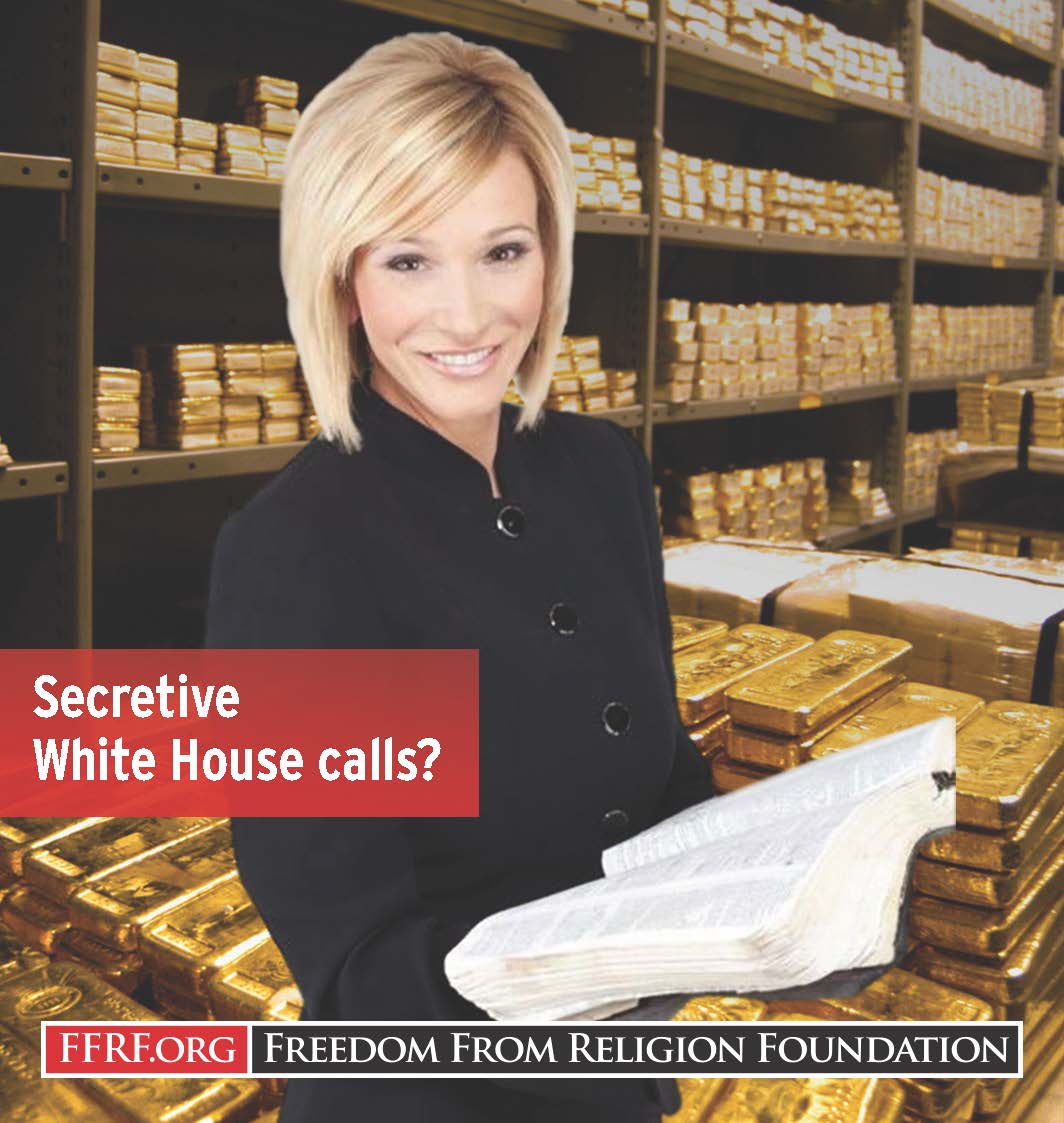 The Freedom From Religion Foundation is releasing evidence today of how the Trump administration has secretly turned the Paycheck Protection Program (PPP) into a bonanza of tax-paid handouts for churches and religious leaders.

FFRF is providing audio documentation, via a recording that it made, of clandestine calls the White House set up with Trump-allied preachers and church leaders specifically to funnel taxpayer money to churches through the PPP. This giveaway to churches is the first time in U.S. history that tax funds have been directly used to pay the salaries of ministers and religious staff for religious purposes. Religious organizations received at least $7.3 billion in forgivable loans, with megachurches and thousands of Catholic dioceses amassing millions.

President Trump’s offering of public funds to religious ministers breaks with 250 years of constitutional precedent. As the Framers of the secular U.S. Constitution understood and discussed at length, religious liberty requires that citizens be free to decide which church to personally support, or to support none at all. Until very recently, even the fiercest opponents of the separation between state and church admitted that forcing taxpayers to pay the salaries of clergy was flagrantly unconstitutional.

The audio of two calls between religious leaders and the White House, made available today by FFRF, confirms that the White House secretly worked to give church leaders special access to PPP, ensuring they could receive top dollars from U.S. taxpayers.

The first such conference call took place on April 3, just as the PPP went into gear and a full two weeks before the Small Business Administration published its final rules on church eligibility — for the first time — for SBA funds. This secret announcement to clergy reveals that the SBA had no intention of listening to public comments on the proposed rule, and had already decided to extend these loans to churches, in spite of the Constitution and any public outcry. At the time of this call, SBA had only awarded about 10,000 of the 661,218 PPP loans.

Trump-allied faith leaders were assured by the federal government that even a discriminatory fly-by-night “church” that provides absolutely no secular social services, and of which the owner is the sole employee, could have its wages covered by taxpayers during the PPP time period.

The second call, 100 minutes on June 22, was even more explicit, with churches urged to apply for PPP funds before the June 30 deadline. Focus on the Family founder James Dobson, a member of Trump’s Evangelical Advisory Council, explained that the Dr. James Dobson Family Institute, which took in $350,000–$1 million, “has literally been kept solvent . . . by the Paycheck Protection Plan (sic)” (44:30). Dobson explained that in 43 years of leading two faith-based ministries, he has “never asked for, nor received, one cent from the federal government” (43:49), expressing his surprise that taxpayer funds could now flow to his ministry.

At that meeting, evangelist Paula White, a White House employee, touted the Trump administration’s blending of state and church, such as inserting “faith directors” into every executive agency (7:50) and securing grants for religious purposes (6:45). She praised Trump for “put[ting] ‘merry’ back in Christmas” (6:35).

The calls came in addition to regular White House conference calls specifically hosted for church leaders regarding the pandemic. Trump and Vice President Pence personally participated in at least one such call, which was described as “more like a time for Trump’s faith surrogates to praise Trump rather than to truly reach out to faith communities.”

Under the PPP, which is administered by the Small Business Association, companies with fewer than 500 employees can receive taxpayer-financed loans that don’t need to be repaid so long as they are primarily spent on employee wages. In May, the Freedom From Religion Foundation sounded the alarm that the shocking change in SBA’s rules allowing churches and other faith-based organizations to receive funding meant taxpayers would be forced to pay the salaries of ministers — a flagrant violation of the constitutional principle of separation between state and church.

Trump and SBA, not the CARES Act passed by Congress, allocated these billions to churches. Although the CARES Act extended eligibility for loans from the SBA to nonprofits, which was new, the law does not give the SBA the power to extend this eligibility to houses of worship, nor could it. The Constitution prohibits government funding of religion. In fact, the CARES Act only mentions religion once, prohibiting any financial assistance given to higher education institutions from going to “capital outlays associated with facilities related to athletics, sectarian instruction, or religious worship.”

It was the SBA, not Congress, that issued rules and guidance declaring the forgivable loans distributed under the PPP created by the CARES Act “can be used to pay the salaries of ministers and other staff engaged in the religious mission of institutions,” and this funding will be provided “without regard to whether nonprofit entities provide secular social services.” To do this, SBA had to suspend numerous rules that, correctly, prevent taxpayer funds from flowing to churches.

Below are summaries and documentation of what took place during two of the White House’s conference calls with religious leaders:

The first call
On April 3, two SBA representatives joined the surgeon general, White House officials and more than 500 church-related participants to explain that the SBA would release guidelines on PPP loans specific to churches. (The call was led by Jenny Korn, deputy assistant to the president in the Office of Public Liaison.)

Paula White was introduced with her official White House title (“adviser to the White House Faith and Opportunities Initiative”) and began the call with a prayer asking people (4:33) to “turn from their wicked ways” and convert to her brand of Christianity. The call also concluded with a sectarian Christian prayer, delivered by Supreme Knight Carl Anderson of the Knights of Columbus.

Before sharing reasonable information regarding the pandemic, Surgeon General Jerome Adams discussed his personal religious beliefs (“As was mentioned, I am a Christian”) and explained that prayers are part of the government’s response to the pandemic: “We’re here trying to empower (7:39) and equip health care professionals, hospitals, public health departments, and especially faith leaders, to do what works to keep our citizens safe from harm. … By working together and by supporting our neighbors and each other, and through prayer, (13:24) we will get through this.”

Deputy Assistant to the President Jenny Lichter reassured the clergy that there would be virtually no limits for churches qualifying for PPP funds. She emphasized (30:33) that taxpayer funds would be available even to churches that did nothing other than proselytize:

“Faith-based organizations are eligible regardless of whether they provide secular social services.”

Lichter explained that churches would qualify (31:15) for the loans even if they have not received an official tax-exempt designation from the IRS, since churches are not required to do so:

“Churches receive some special treatment from the IRS in the sense that they don't necessarily have to apply to the IRS and receive proof of tax-exempt status in order to be able to be treated as if they're tax exempt under the law.”

The White House made it clear to the clergy: Anything claiming to be a church qualifies for public money, even if the IRS has never heard of it. This free giveaway of taxpayer dollars might be the first and last time the government ever hears from the entity.

Lichter then assured faith leaders that they would still be able to discriminate on the basis of race, gender, sexual orientation or anything else: “A faith-based organization that receives a loan will retain its independence, its autonomy, its right of expression, its religious character, its authority over its internal governance, and no faith-based organization will be excluded from receiving funding because of any limitations it might place on leadership, membership, or employment based on shared religious faith or practice.”

Two SBA representatives then spoon-fed (31:40) listeners details of the program, including that the program “includes sole proprietors, independent contractors, and self-employed persons,” meaning that individuals trying to run their own church or religious organization could qualify for loans and pay themselves.

The June call
Paula White, this time introduced as Trump’s “spiritual adviser,” led a similar sectarian prayer to start the call (3:26). The prayer vilified non-Christians, contrasting “evil men” (4:22) with those who are “attentive to godly counsel” (4:28).

Following the prayer, White discussed the White House’s role in the PPP program (6:00), confirming that she was on the call as a government representative, not as a private citizen. Two panelists then spoke about receiving PPP funds: Evangelical preacher Jentezen Franklin and Dobson, as reported above.

White, who is on Trump’s Evangelical Advisory Board and the White House payroll as an official staffer, closed the June 22 call by thanking Trump and SBA Administrator Jovita Carranza in a prayer that ended “in Jesus’ name.” White appears to explicitly thank Carranza for funneling PPP money — the “blessing” — to “so many houses of worship and faith” (34:28), something that was not envisioned in the CARES Act itself:

We thank you for our President, we thank you for moving upon their hearts, we thank you for keeping them, and even as Administrator Jovita asks for prayer, we lift her up right now. ...We thank you for everything that she does and everything she represents. And I thank you for her walk with you and I ask that you would reward her greatly. Give her strength. Let her staff work in cooperation and unity, and we ask for miracles, God. These divine moments are miracles. And we thank you that you have been such a blessing to so many houses of worship and faith, and we cannot even begin to articulate our thank you.

This boondoggle, this swamp filled with fetid holy water, this ten-figure transfer of wealth from the American taxpayer to churches, was thanks to the SBA, not Congress. Trump rewarded his most fervent supporters with billions of taxpayer dollars in clear violation of the Constitution.