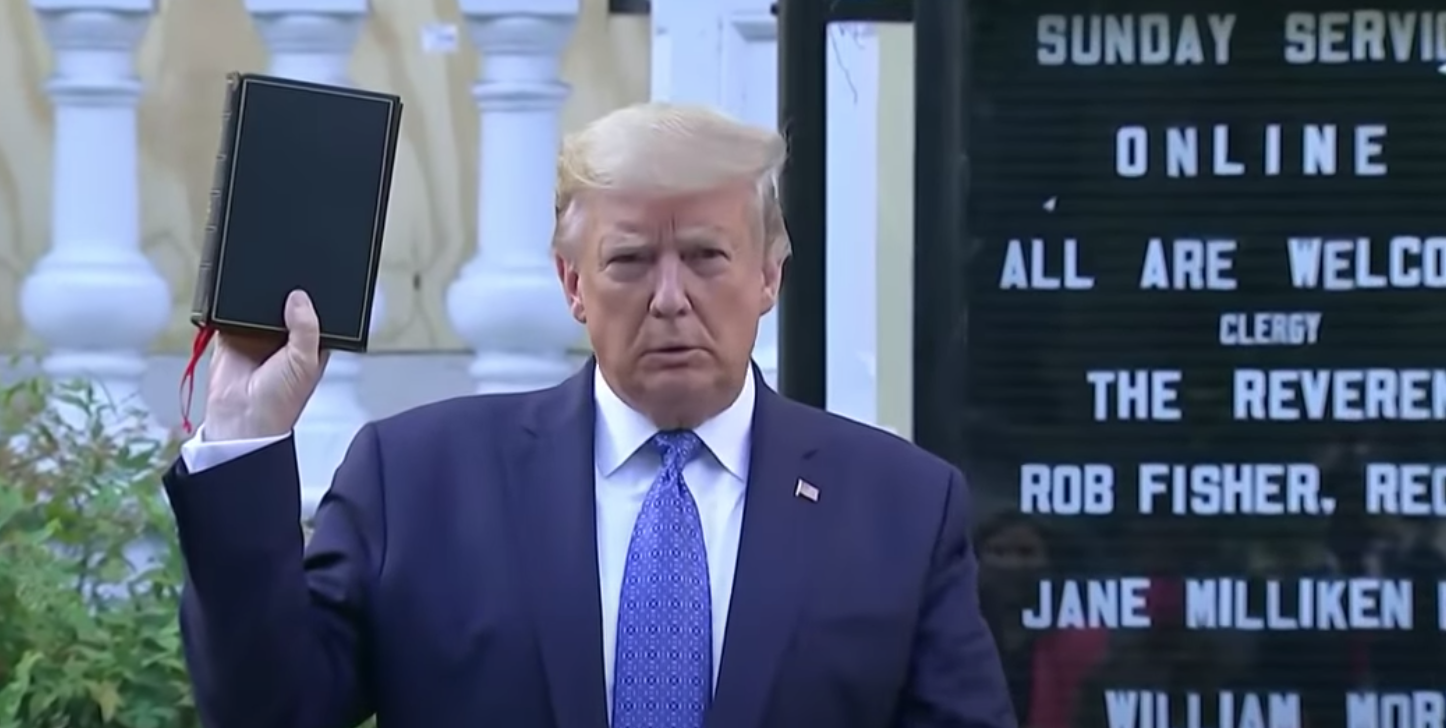 Talk about theocratically clearing the stage.

About 6:30 p.m. last night, without any warning, federal officers dispersed rubber bullets and tear gas into a crowd of peaceful protesters in Lafayette Square next to the White House — to empty the area so that President Trump could take part in a pandering photo-op at a church.

Video footage has caught the terror and cries of alarm by the peaceful demonstrators as they were suddenly set upon. Explosions sounded and protestors cried out. Trump then self-righteously walked to St. John’s Episcopal Church, across from the White House, where he piously stood silently, displaying “a bible.” (When a member of the media asked him, “Is that your bible,” Trump replied, “It’s a bible.”)

Various individuals, such as singer (and freethinker) John Legend, have since pointed out that Trump was holding the bible upside down.

The bible has for far too long been used as a weapon of white supremacy. U.S. slaveowners were able to turn to this “holy” book containing many verses ordering or sanctifying slavery to justify its long, shameful reign in America.

For instance, Leviticus 25:44-46 promises: “Your male and female slaves are to come from the nations around you; from them you may buy slaves . . . and they will become your property. You can . . . make them slaves for life.” This is not just a “passage from the bible.” It is supposedly “God’s word.” (FFRF’s website catalogs other pro-slavery biblical edicts from Dan Barker’s book, God: The Most Unpleasant Character in All Fiction.)

The violence took place almost immediately after Trump had delivered a speech in the Rose Garden threatening to deploy the U.S. military if public officials didn’t take action to “dominate the streets.”

Rev. Mariann Budde, the Episcoal bishop of Washington, has publicly condemned Trump’s visit. “I am outraged,” Budde told the Washington Post, noting Trump did not give her notice or ask for permission to visit the church. “Everything he has said and done is to inflame violence,” Budde said.

Presiding Bishop Michael Curry, head of the denomination, had his own criticism of Trump for using “a church building and the Holy Bible for partisan political purposes.”

FFRF is adding its freethinking voice to the chorus condemning the president.

“We have seen a lot of pandemic pandering from various governors and the White House,” says Dan Barker, FFRF co-president. “But it was shocking to see a president jeopardize the safety and well-being of his fellow Americans just so that he could engage in theocratic posturing.”