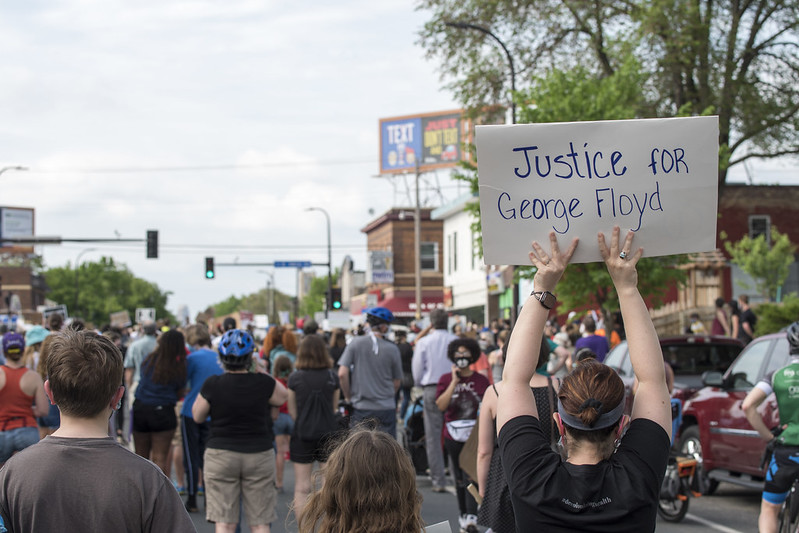 We have all watched the horrifying video documenting a helpless African-American’s life being snuffed out by a pitiless and indifferent white police officer in Minneapolis. African-American bystanders desperately tried to point out that George Floyd was not resisting arrest and then didn’t appear to be breathing during the horrifying 8 minutes and 46 seconds officer Derek Chauvin kept his knee on Floyd’s neck. Other cops stood by watching indifferently as Floyd desperately gasped, “Please, please, please, I can’t breathe.” Toward the end, Floyd even heartbreakingly cried out for his mother, who died two years ago.

African-Americans and other minorities have long pointed out how they are imperiled in the United States, that “driving while black or brown” can get them pulled over by cops — and often much worse.

“Wearing a hoodie while black” can result in death, with the killer getting off scot-free, as when George Zimmerman was acquitted for fatally shooting Trayvon Martin, 17, in Florida back in 2012.

“Jogging while black” was Ahmaud Arbery’s “crime” when he was murdered in February in Georgia at the hands of several white men who have since been arrested.

Breonna Taylor, a 26-year-old EMT, was killed by Louisville police in her own home on March 13 during a bungled “no-knock” drug search intended for a home miles away belonging to two men already in custody.

Even “bird-watching while black” led to a recent confrontation in Central Park, which fortunately did not escalate but could have endangered the life of Harvard grad Christian Cooper.

Black and brown Americans in the United States are continually aware of their vulnerability. As Minneapolis Mayor Jacob Frey said after Floyd’s murder, “Being black in America should not be a death sentence.”

One of the most important roles a U.S. president plays is to set the tone for the nation. President Trump has made a few empathetic comments, such as this statement on Saturday, May 30: “The death of George Floyd on the streets of Minneapolis was a grave tragedy. It should never have happened. It has filled Americans all over the country with horror, anger and grief.” But he has made several others contradicting that sentiment. His now-infamous tweet, “when the looting starts, the shooting starts,” has inflamed the nation. While cloistered inside his White House bunker yesterday, he has continued to tweet messages such as “LAW & ORDER!” and to falsely claim that spontaneous protesters are part of the nebulous antifa movement. On Saturday, Trump’s comments even summoned the specter of Alabama’s infamous segregationist Bull Connor, when he said that the Secret Service was ready to sic the “most vicious dogs” on protesters.

Our nation is already on edge. The pandemic is exposing glaring inequities and injustices in the United States. One in four Americans is unemployed, with African-American and Latinx communities disproportionately affected by the economic downturn. Black and Hispanic Americans are also disproportionately catching and dying of COVID-19. And it is a national shame that the Navajo Nation’s coronavirus infection rate has become the highest in the country, that many in the tribe do not even have running water on the reservation and that the federal response has been botched. This is another tragic way in which being a racial minority in the United States can become a death sentence.

Americans — white and black, religious or freethinking — must speak up and demand not only justice for Floyd, but a national reckoning with racial profiling, police brutality, vigilantism and institutional indifference and racism.