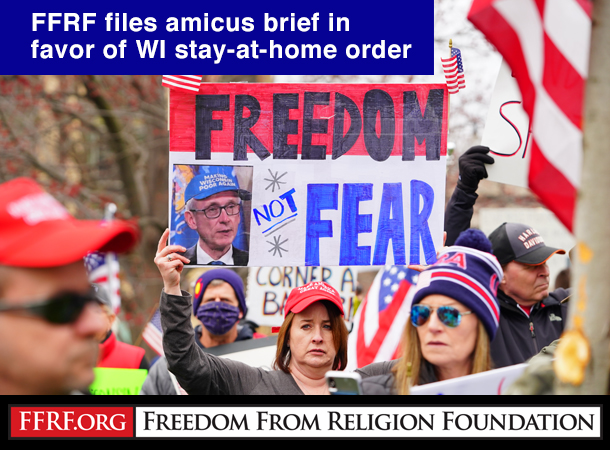 The Freedom From Religion Foundation has filed an amicus brief before the Wisconsin Supreme Court in favor of the state’s stay-at-home order, specifically as it applies to religious gatherings.

Among the two state citizens petitioning the highest state court seeking a lifting of the social distancing directive is Larry Chapman, a member of the Lakewood Baptist Church in Pewaukee. Chapman alleges that his rights are infringed because religious worship services are limited to gatherings of less than 10 people.

“One petitioner in this case, Larry Chapman, wants to use religion to strike down Wisconsin’s temporary state health order,” its brief states. “If this court agrees to strike down, or even temporarily enjoin the order, the effect will be to spread a deadly virus, which is to risk endangering the health and lives of hundreds, if not thousands, of other Wisconsin citizens.”

FFRF’s brief cogently asserts that the order does not infringe the state Constitution, and then goes on to convincingly explain why.

“Mr. Chapman relies on two arguments to justify his claims under Article I, Section 18 of the Wisconsin Constitution,” states the brief. “First, Mr. Chapman suggests that the religious burden he claims to suffer from falls into a special category of conduct that the state could never limit even if it proved a compelling interest to justify its action. Second, Mr. Chapman argues that he has established that the order does not pass strict scrutiny under Article I, Section 18. Both of Mr. Chapman’s arguments fail.”

FFRF notes that the government already regularly limits worship gatherings if they jeopardize public health. For instance, the government can mandate fire prevention requirements. “Preventing large gatherings to protect health due to a pandemic is even more crucial,” FFRF states.

FFRF’s brief offers a number of recent instances that show the possible social toll in Wisconsin if Chapman prevails.

“In South Korea, over half of the country’s cases can be traced back to a single patient who attended a church service,” it points out. “Additional case clusters in the country have been traced back to other religious gatherings. Across the United States, similar examples of religious gatherings causing COVID-19 case clusters have already been detected in California, Kansas, Virginia and Washington.”

At least 42 U.S. states have issued statewide “stay-at-home” orders. FFRF has written to all 50 governors (some more than once) to remind them, as the brief does, that “viruses do not respect houses of worship, they simply travel from person to person. The more people who gather, the more viruses can spread. There is no way to effectively prevent this other than preventing person-to-person contact, so large gatherings must be stopped.”

The Freedom From Religion Foundation comes out strongly in favor of the Wisconsin stay-at-home order. “The provisions of Emergency Order 28 are designed to save lives during a pandemic,” the brief concludes. That’s why FFRF is asking the Wisconsin Supreme Court to deny the petitioners’ request and to let the nine-person cap on religious gatherings stay in place.

The state/church watchdog’s attorneys on the case are FFRF Senior Counsel Patrick Elliott and FFRF Legal Fellow Dante Harootunian. The Freedom From Religion Foundation is a Wisconsin-based national nonprofit organization with 32,000 nonreligious members across the country, including approximately 1,500 members in Wisconsin. Its purpose is to protect the constitutional principle of separation between state and church.