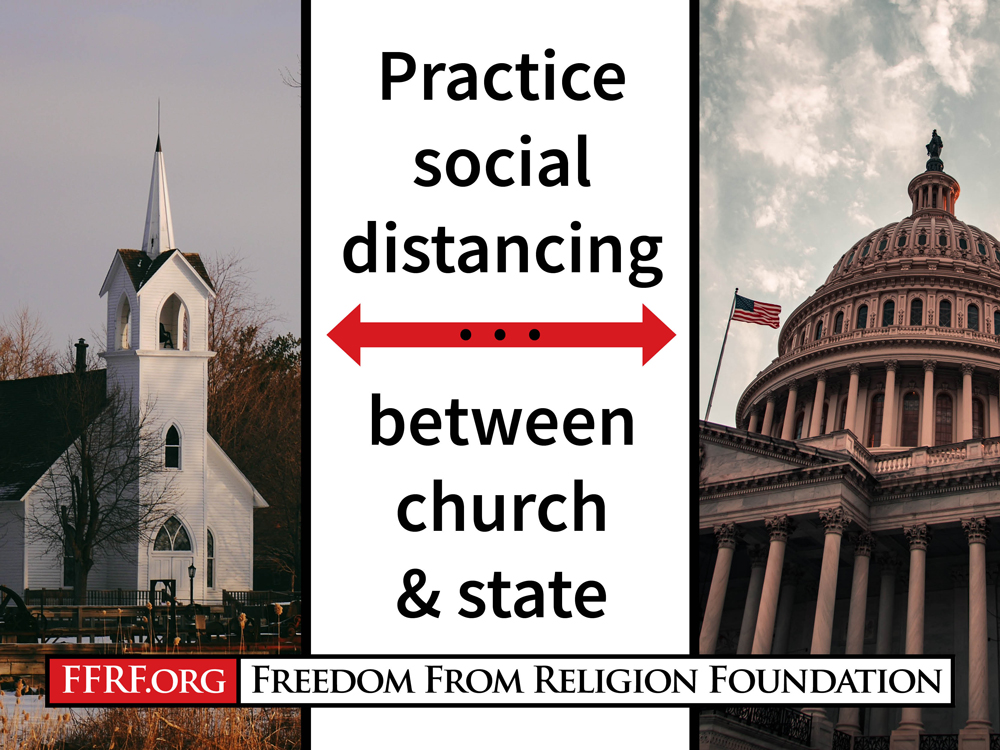 A rookie judge’s shameless Christian Nationalist pandering in a recent coronavirus-related judicial order and opinion is alarming, contends the Freedom From Religion Foundation.

Judge Justin Walker granted an emergency restraining order allowing large Christian congregations in the Louisville, Ky., area to gather for Easter church services despite the demonstrated risks of such gatherings spreading COVID-19. Walker’s order came a mere three weeks after his official investiture to a federal judgeship position, even though he lacks “any significant trial experience,” to quote the nonpartisan American Bar Association. (Remarkably, Walker has now been nominated by President Trump to fill a powerful position on the District of Columbia Court of Appeals.)

Walker began his opinion and order with the incendiary statement: “On Holy Thursday, an American mayor criminalized the communal celebration of Easter.” To put it bluntly, that is a lie. Walker characterized Louisville Mayor Greg Fischer as having “criminalized” religion based solely on the word of a preacher screaming persecution. And he issued his opinion without waiting to hear from the city. As the mayor explained: “I regret that the judge did not allow us to present evidence that would have demonstrated there has been no legal enforcement mechanism communicated. We attempted twice to contact the court.”

Walker’s 20-page order and opinion included 86 footnotes, biblical citations, and some hurried research on the Pilgrims and their trans-Atlantic journey. But he cast aside the adversarial process that lies at the heart of our judicial system. Had Walker abandoned his research into the Pilgrims and contacted the city instead, he might have discovered that even though the mayor and city were the only government parties to the lawsuit, they had not issued any orders — only the Kentucky governor, not a named party, had. Put another way, Walker had no jurisdiction over the mayor and city, since the church sued the wrong government. Walker should have dismissed the case, but instead rushed to publish an opinion that would gain him some personal renown as a crusading Christian in a black robe. This is what judicial activism looks like.

Walker’s rush to judgment was all the more alarming because it relied only on the word of this church, especially the pastor’s affidavit, to determine the facts of the case. That affidavit was “misleading and inaccurate” according to the city’s filing with the court. Unlike Walker, the city brought evidence: photograph after photograph of the church violating social distancing orders at their previous drive-in services. More than 20 photos showing worshippers hanging out of car windows within 6 feet of each other, passing a collection basket around, and standing side-by-side while singing — evidence that controverted the preacher’s sworn affidavit and undermined the already absurd opinion.

Walker’s bias is readily apparent in his opinion, which reads like the first draft of a Christian Nationalist manifesto. “It was not long ago, for example, that the government told the Supreme Court it can prohibit a church from choosing its own minister; force religious business owners to buy pharmaceuticals they consider abortion-inducing; and conscript nuns to provide birth control,” writes Walker. Such inflammatory mischaracterizations of three recent Supreme Court cases would be befitting of a Breitbart headline, not a judicial opinion.

Walker conflates deliberate religious persecution with a well-meaning government program meant to save people’s lives and stop the spread of a pandemic. Governments all over this country are trying to navigate a pandemic, to use science and health to combat a lethal contagion while still recognizing the people have constitutional rights.

There is really no justifiable argument that stay-at-home orders threaten religious liberty. Churches and worshippers do not have a right to risk the lives of every other citizen or to place additional strain on our overtaxed health care providers.

Walker’s decision is political, and should raise the alarm that our nation’s judiciary has been compromised. The people need to push back against such heavy-handed and shameless political pandering from our supposedly apolitical judicial branch.

“When judicial appointments are filled not based on merit but in order to achieve partisan political objectives, the result is the degradation of our country’s judiciary,” notes FFRF Co-President Annie Laurie Gaylor. “Sadly, Walker is not a judge seeking truth or to uphold the law, but an ideologue bent on using the courts as a tool to serve a conservative political agenda.”

The Freedom From Religion Foundation is a national nonprofit organization with more than 31,000 members and several chapters across the country, including hundreds of members and a chapter in Kentucky. FFRF’s purposes are to protect the constitutional principle of separation between church and state, and to educate the public on matters relating to nontheism.