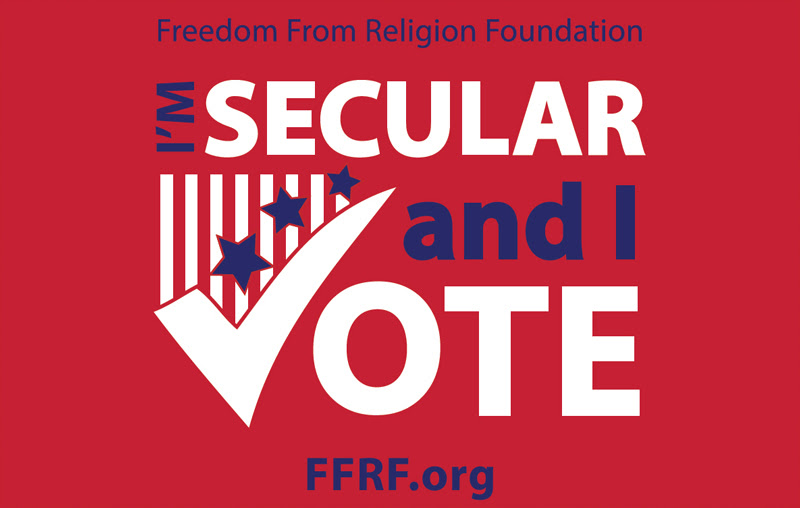 The injustice of forcing citizens to endanger their lives to vote in the midst of a pandemic was recently brought home to the Freedom From Religion Foundation during the debacle that was Wisconsin’s in-person primary election.

Several FFRF staff members were forced to risk their lives — and the lives of their families — on Tuesday, April 7, in order to vote, after requesting absentee ballots that never arrived. Both the Wisconsin and U.S. Supreme Courts compelled the state’s voters to violate stay-at-home orders and risk health and plague to exercise their constitutional right to vote. (Note that both courts safely issued these undemocratic decisions via remote work.)

Dissenting Supreme Court Justice Ruth Bader Ginsburg warned that the decision would result “in massive disenfranchisement” and wrote that the reasoning of her conservative colleagues “boggles” the mind.

All evidence so far backs up Ginsburg’s prediction. Only five polling places were even open in Milwaukee, a county of nearly 1 million people (down from more than 180 polling sites in normal elections). Lines were long at many polling stations, making social distancing a joke. Poll workers had to sit close to each other, and handle countless IDs, thanks to Wisconsin’s unnecessary voter ID requirement. Even worse, the decision to override Wisconsin Gov. Tony Evers’ accommodation, which would have allowed a longer time frame to mail in ballots, was purely ugly partisan politicking, a preview of coming attractions in November.

The pandemic has brought renewed attention to the advantages of universal vote by mail — and has strengthened calls to put it in place by the November election.

Why is universal vote by mail a secular issue?
American secular voters are becoming a force. Secular voters sharply increased their share of the U.S. electorate to 17 percent by 2018: a massive 55 percent increase. The Freedom From Religion Foundation wants to see those numbers continue to climb. After all, the nonreligious are 26 percent of the U.S. population, so we have secular muscle to flex.

Currently, five states conduct all elections entirely by mail (Colorado, Hawaii, Oregon, Washington and Utah) and 21 allow voting by mail in lesser elections. Conveniences include privacy, fewer barriers for those with disabilities, more time to vote (ballots are sent out in advance), and to consider one’s vote. Even better, voting by mail costs less — in one study up to 40 percent less. Best of all, the convenience tends to increase turnout and enhance democracy at work. When Colorado moved to voting by mail in 2014, turnout was higher than predicted by 3.3 points. During the 2018 primaries, states with voting by mail had a 15 percent higher median turnout than states which focus on in-person voting.

Why FFRF supports voting by mail
First, it’s based on evidence, science, reason and compassion, which should be the basis for our public policy.

There are, of course, pitfalls. For instance, while data suggest more minorities and younger Americans will vote, those same voters are more apt to have their absentee ballots thrown away or challenged more often. The danger is five times more likely in states like Florida. But these problems are surmountable — and they can’t be compared to the risks of in-person voting during a deadly pandemic.

Universal vote by mail will not just help secular voters, but will assist all Americans exercise their supreme right of citizenship. FFRF supports it. We hope you will, too.