FFRF signs on to SCOTUS brief over contraception exemption 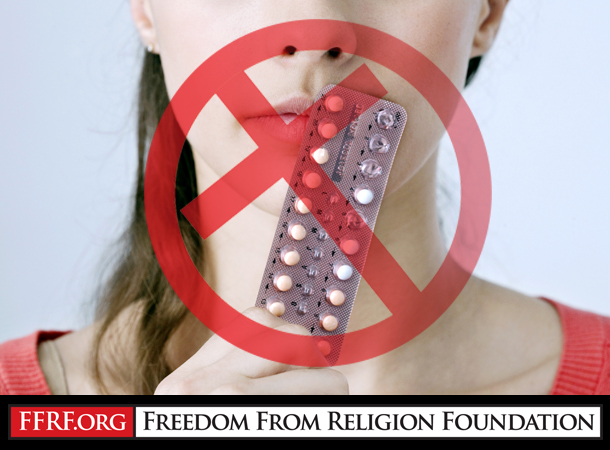 The Freedom From Religion Foundation has signed on to a brief before the U.S. Supreme Court contending that the Trump administration is breaching the First Amendment in allowing certain religion-based exemptions from required birth-control coverage.

A diverse assortment of groups, including Americans United for Separation of Church and State and the Anti-Defamation League, are explaining to the U.S. Supreme Court why Trump administration rules violate fundamental First Amendment protections for religious freedom.The case is centered around the Affordable Care Act, which requires that employer-provided health plans cover preventive care for women — including all FDA-approved methods of contraception — without cost-sharing. Since 2013, the implementing regulations have exempted houses of worship. And religiously affiliated entities have similarly been entitled to an accommodation — once they give notice that they want one. The Trump administration has since sought to dramatically increase exemptions to the contraceptive mandate.

“At issue is a push in 2017 to expand exemptions to the ACA’s ‘birth control mandate’ with new regulations that would allow all but publicly traded companies, including private colleges and universities that issue student health plans, to opt out on moral grounds,” the Philadelphia Inquirer reports. “The attorneys general of Pennsylvania and New Jersey challenged the proposal, saying the rule change could saddle their states with the cost of dealing with thousands of unplanned pregnancies and as many as 127,000 women losing access to no-cost contraception.”

A district court judge and a three-member panel of the 3rd U.S. Circuit Court of Appeals both have ruled against the Trump administration’s proposed expansion. A Catholic order of nuns, the Little Sisters of the Poor Saint Peter and Paul Home, was permitted to intervene in the case and argue that the expansion was lawful.

By establishing religious and moral exemptions that effectively nullify the contraceptive-coverage requirement’s protections for countless women, the brief contends, the Trump administration has upended a previously satisfactory balance. Its religious exemption directive permits employers to exempt themselves in a way that affirmatively bars the government from providing the coverage by other means. Under Trump’s new directive, entities that object to providing contraceptive coverage would no longer even be required to give notice to the government, meaning employees would not have access to other coverage.

The Trump administration’s religious exemption runs haywire, the brief maintains. It authorizes broad exemptions without regard to whether an entity demonstrates (or even asserts) that the pre-existing accommodation substantially burdens religious exercise. And in the name of accommodating employers, it strips employees, spouses and dependents of the insurance coverage to which they are entitled by law, imposing on them substantial costs and burdens just to obtain the critical health care that should be available to them.

The challenged rules fail miserably: They broadly exempt objectors on the bare possibility that some religious exercise somewhere might be burdened, and are in total dereliction of the court’s directive and the government’s statutory duty to ensure that women receive the mandated contraceptive coverage without cost-sharing.

The religious and moral exemptions that the Trump administration is trying to implement are constitutionally defective and are neither required nor permissibly authorized under the Religious Freedom Restoration Act, the brief concludes.

The Freedom From Religion Foundation, based in Madison, Wis., a 501(c)(3) nonprofit educational charity, is the nation's largest association of freethinkers (atheists, agnostics), and has been working since 1978 to keep religion and government separate. It would like to thank the Americans United for Separation of Church and State attorneys for authoring the brief.