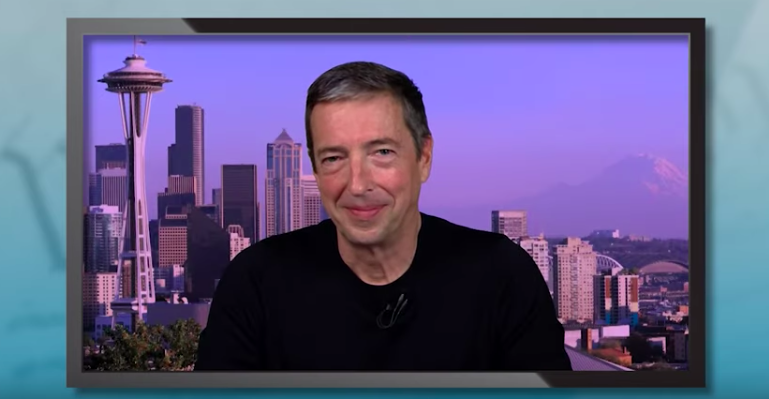 As an antidote to religion on the airwaves and Sunday morning sermonizing, the half-hour show airs Sunday mornings in 11 cities and Sunday evening in FFRF’s hometown of Madison, Wis. All previous programs are also available to view on FFRF’s YouTube channel.

Ron, who has so generously recorded an iconic 30-second TV commercial for FFRF, is, of course, the son of Nancy and President Ronald Reagan. He’s had a dancing career, including at the Joffrey Ballet. And he has worked as a broadcast and print journalist and TV and radio commentator. During the interview, Ron discusses being a near-lifelong atheist.

“At age 12, my father came into the bedroom one Sunday morning; we were going to pile into the car and head off to the Bel Air Presbyterian Church,” he recalls during the show. “I said, ‘I’m not going. I’m done with that.’ And he was wise enough to not try and strong-arm me into it.”

If you find yourself hunkering down with extra free time, you might enjoy catching up with previous episodes of “Freethought Matters,” which has been in production for several years. The first guest in the new season was U.S. Rep. Jared Huffman, founder of the Congressional Freethought Caucus. Huffman’s appearance on the show made media waves due to his remarks about his colleague Rep. Liz Cheney’s dogmatic stance on the religious oath. World-renowned philosopher Daniel Dennett, acting legend Ed Asner and U.S. Reps. Jamie Raskin and Mark Pocan have recently appeared on the show. Guests on past seasons include comedian Julia Sweeney, former Planned Parenthood director Cecile Richards and a variety of freethought authors and activists.