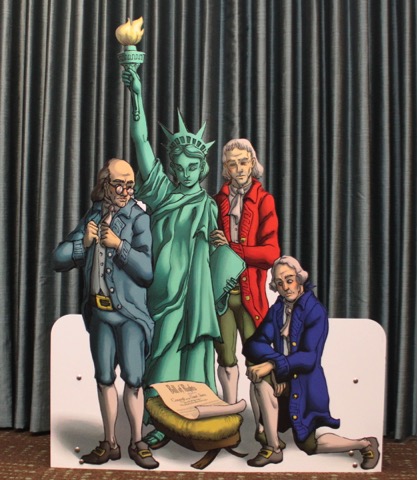 The Freedom From Religion Foundation has won its case at the appeals court level against censorship of its display in the Texas Capitol by Gov. Greg Abbott.

The unanimous opinion by the three-judge court panel of the 5th U.S. Circuit Court of Appeals today granted FFRF additional relief. The judgment, written by Judge Stephen A. Higginson, sent the case back to the district court that previously ruled in FFRF’s favor, to issue a more expansive remedy to protect FFRF’s right to place displays in the future and to ensure a similar constitutional violation cannot happen to other organizations.

FFRF, with the help from members and the requisite sponsorship by a legislator, had placed a Winter Solstice display in the state Capitol in December 2015 as a response to a Christian Nativity there. The whimsical display depicted the Founders and the Statue of Liberty celebrating the “birth” of the Bill of Rights (adopted Dec. 15, 1791). Abbott, as chair of the Texas State Preservation Board, ordered FFRF’s display taken down only three days after it was erected, lambasting it as indecent, mocking and contributing to public immorality.

Abbott appealed that ruling on narrow technical grounds, arguing that the district court lacked the power to rule in FFRF’s favor. The 5th Circuit disagreed today — and ordered the district court to issue broader relief that will ensure FFRF’s free speech rights are protected in the future.

“It’s highly gratifying to win our court battle in FFRF v. Abbott,” says FFRF Co-President Annie Laurie Gaylor. “Free speech — even for the atheists Abbott reviles — is alive and well in Texas, despite the governor’s attempts to malign, censor and exclude nonbelievers.”

Gaylor adds that it is a sweet victory, but that Abbott’s Christian Nationalist agenda is currently causing irreparable harm, since his actions have padlocked abortion clinics in the state of Texas as a phony reaction to the COVID-19 pandemic.

The district court is now tasked with deciding whether Texas’ rules governing displays in the Capitol leave so much room for discriminatory censorship that they must be scrapped altogether. Citing prior decisions, the 5th Circuit warned that any government regulations on speech must “provide adequate safeguards to protect against the improper exclusion of viewpoints.”