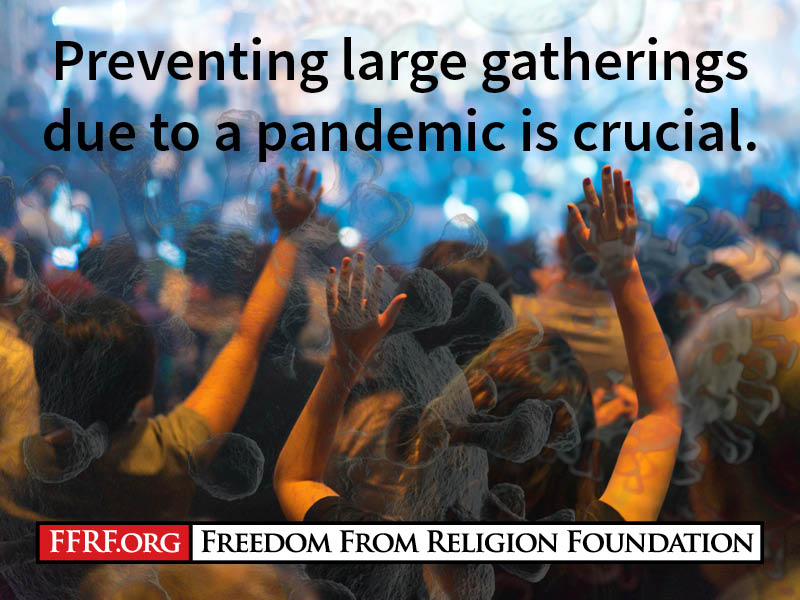 Churches must be included in the extensive list of entities currently prohibited from large gatherings, the Freedom From Religion Foundation is asking the nation’s governors.

To combat the spread of COVID-19, states are heeding the advice of public health professionals and banning large gatherings of people, other than where essential. However, some states have exempted church gatherings from this requirement, and some churches have even asserted that it would be unconstitutional for the state to prohibit large in-person worship services.

Governors must include worship services and other large church gatherings among the gatherings they limit to protect the public health, FFRF is urging in a letter sent out to the chief executives of all 50 states.

The rights the First Amendment guarantees, such as free assembly and the free exercise of religion, are limited. In fact, the government already regularly limits worship gatherings if they jeopardize public health. Preventing large gatherings due to a pandemic is even more crucial.

“To determine when it is appropriate to limit these foundational rights, the government must balance its interest against the protected right,” FFRF Co-Presidents Dan Barker and Annie Laurie Gaylor write to governors all over the country. “As the Supreme Court has explained, the government may limit those activities if doing so is the least restrictive means of achieving a compelling government interest.”

Protecting the public against a pandemic is unquestionably a compelling government interest, among the most compelling that it has, FFRF emphasizes. And there is no less restrictive way to achieve this interest than prohibiting large gatherings. The more people who gather, the more viruses spread. Thus, the state has every right to prohibit these services under the current extreme circumstances.

The worshippers seeking exemption from social distancing orders are not simply asking for a right to gather and worship, they are also asking for a right to risk the health and lives of every other member of the community and country, FFRF underscores. More than 100 years ago, in a 7-2 opinion, the U.S. Supreme Court explained that stopping the spread of a deadly disease, smallpox, was an interest more important to society than an individual’s religious rights. Prohibiting large gatherings is not a ban on worship, as some churches have asserted. Churches and believers all over the country are worshipping alone, in small groups or even in large groups online. The ban is simply on unsafe activity, regardless of purpose. Framing this restriction as a ban on worship would be like arguing that a speed limit is a ban on driving.

Churches that hold services are demonstrating a complete lack of respect for those efforts and the lives of community members, not just worshippers. Now is no time for favoritism of churches. Treating churches the same as all other organizations is constitutional, smart, necessary, and an example of equality, not an assault on religious freedom, FFRF declares.

The Freedom From Religion Foundation is a national nonprofit organization with more than 31,000 members across the country, including in every state in the union. FFRF protects the constitutional separation between state and church, and educates about nontheism.