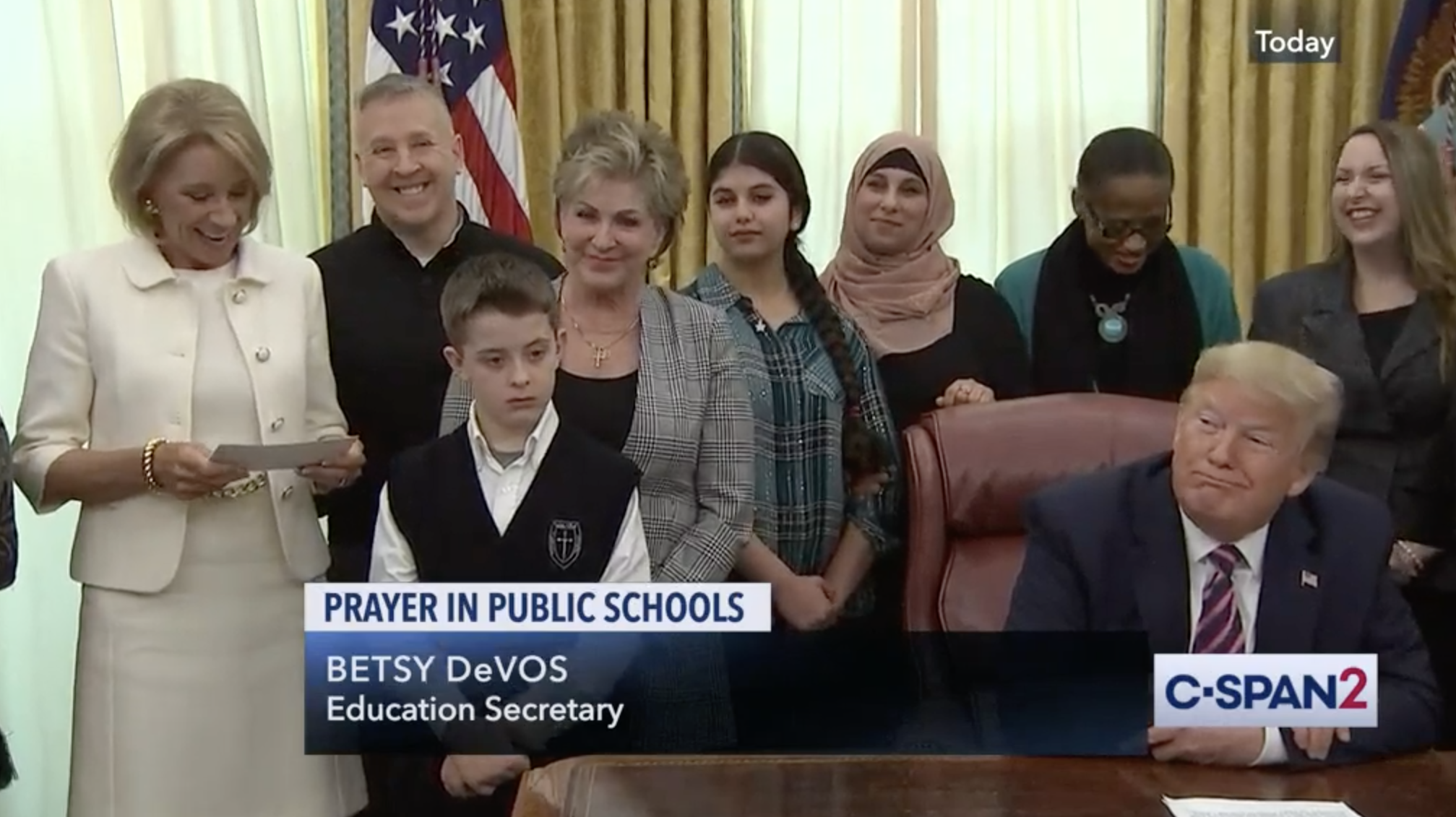 President Trump held an event yesterday designed to create the phony impression that religious students and teachers are routinely discriminated against in our public schools. A diverse group of children and adults, including Education Secretary Betsy DeVos and White House evangelist Paula White, clustered around the president as a part of a photo-op depicting the persecution of the devout.

The event took place on Religious Freedom Day and was aligned with new Department of Education (generally noncontroversial) guidelines over prayer in public schools. While the guidelines are a regurgitation of constitutionally acceptable guidelines that Presidents Clinton and George W. Bush issued during their tenures, there was one new element: Trump’s variation on these guidelines will require public school districts wishing to receive federal funds to immediately report any state/church litigation in their district — presumably so the Department of Education can interfere, and create more photo-ops making it look like the majority is victimized.

Trump used his press conference as an occasion to grandstand and mislead. He pronounced: “It’s a sacred principle of our republic that government must never stand between the people and God. Yet, in public schools around the country, authorities are stopping students and teachers from praying, sharing their faith, or following their religious beliefs. It is totally unacceptable. You see it on the football field. You see it so many times where they’re stopped from praying. And we are doing something to stop that.”

Trump’s rhetoric went even further, denouncing “a growing totalitarian impulse on the far left that seeks to punish, restrict and even prohibit religious expression.”

The reality is the opposite. The Freedom From Religion Foundation in fact deals daily with complaints over religious proselytizing in our public schools. We typically receive 3,000 complaints about state/church violations a year — over half of them concerning public schools. Complaints involving coaches organizing and participating in prayer and other devotions — and even baptisms! — at football games and other sporting events are among the most common violations in our public schools. We’ve had to sue to stop kindergartners from being picked on, forced to pray at lunch and disciplined for not participating. We’ve had to sue to stop children from being evangelized every week by outside proselytizers as part of the school day. Half of the complaint letters FFRF writes are to enforce existing law over religion in the schools, even though more than 70 years of clear precedent by the Supreme Court militates against religious instruction, devotions and prayer as part of the school day or school events.

Some of the individuals who spoke at the White House were indeed legitimately wronged, such as a young Catholic student whose teacher, in a Mormon community, ordered him to remove the ash from his forehead on Ash Wednesday. It was a mistake by an individual teacher that was immediately corrected and received national publicity by virtue of being such a rare situation.

But some speakers’ claims of persecution were far off the mark, such as Joe Kennedy, a public school coach who was properly fired because he refused to stop abusing his position as a public school coach to proselytize students. Multiple federal courts agreed that the school did the right thing by firing him. By treating Kennedy like a hero, the White House undermines Establishment Clause protections in our public schools, and overtly encourages school teachers and coaches to use their authority to proselytize students.

Discrimination in public schools is most apt to occur to minorities, an excellent reason for keeping public schools free of religious rituals, which call attention to differences and build walls between children. When religion crops up in school curriculums or events, it’s invariably the religion of the majority, turning minorities into outsiders. The tearful young Jewish student who recounted swastikas being drawn at her Florida school was a victim of dismaying anti-Semitism, not of the rules, laws and court decisions that exist to protect her freedom of conscience.

But mixing legitimate and illegitimate claims of religious persecution is a deliberate strategy by the Trump administration intended to distort the real picture. The goal is to create a false perception that believers (mostly Christians) are being victimized by our secular school system. The purpose is to set the stage to dismantle decades of court rulings and regulations that keep our schools secular and protect a captive audience of students from school-fostered proselytization and indoctrination.

The Freedom From Religion Foundation will continue undeterred to fight for a secular public school system and true freedom of conscience for all public school students.