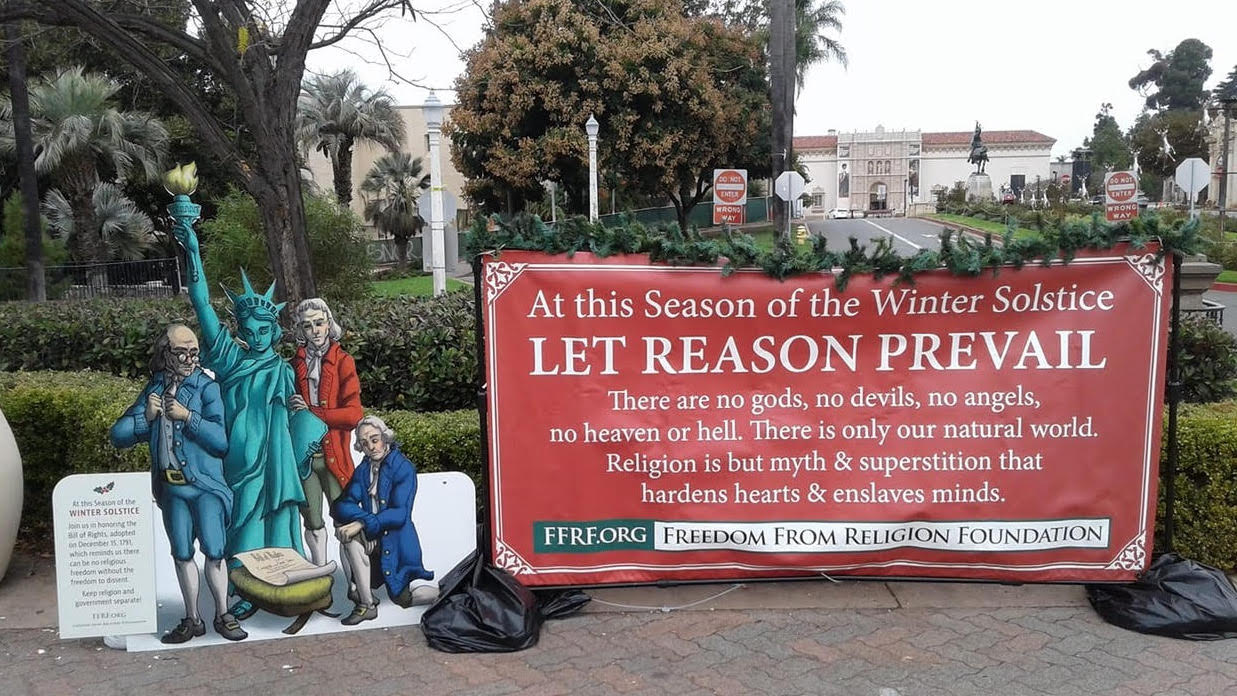 The Freedom From Religion Foundation, with the help of local activists, is exhibiting secular Winter Solstice displays in San Diego this holiday season for the second year running.

Katie D., a San Diego freethinker who has asked to be identified without her full last name, was initially prompted last year to put up two Solstice displays in Balboa Park to counter religious messages placed on public property. The exhibits come back this year and will be up for much of December into the beginning of January.

The first is a large banner which contains a secular message, composed by the late Anne Nicol Gaylor, FFRF’s principal founder:

“At this season of the Winter Solstice, let reason prevail.
There are no gods, no devils, no angels, no heaven or hell.
There is only our natural world.
Religion is but myth and superstition that hardens hearts and enslaves minds.”

The second display is a secular Bill of Rights Nativity. The cutout depicts Founders Benjamin Franklin, Thomas Jefferson and George Washington, along with the Statue of Liberty, gazing in adoration at a “baby” Bill of Rights. A sign beside the tongue-in-cheek Nativity reads:

“At this Season of the Winter Solstice, join us in honoring the Bill of Rights, adopted on Dec. 15, 1791, which reminds us there can be no religious freedom without the freedom to dissent. It ends with: “Keep religion and government separate!”

Katie D. and FFRF faced challenges last year in getting the application approved by the city, despite the large existing religious Nativity scene which has been put up for many years.

FFRF places these solstice displays in many cities around the country, to celebrate freethought and to ensure representation of the growing number of secular Americans.

“We’re delighted to make our presence felt in such a prominent city in the most populous state in the country,” says FFRF Co-President Annie Laurie Gaylor.

The Freedom From Religion Foundation is a national nonprofit organization with more than 30,000 members and several chapters across the country, including over 4,000 members in California and a chapter in Sacramento. FFRF’s purposes are to protect the constitutional principle of separation between church and state, and to educate the public on matters relating to nontheism.