The Freedom From Religion Foundation’s “unabashed atheist” commercial with Ron Reagan ruled the internet during the Democratic debate on CNN Tuesday night.

The 30-second spot (the first freethinking ad believed to have ever run during a presidential primary debate) aired twice during the Oct. 15 debate itself, and also during the primary debate pre-show and post-show. The name of Ron Reagan, the progressive son of President Ronald Reagan and Nancy Reagan, was the most searched term on Google in the course of the debate, as Google itself acknowledged. His name was among the top 20 trenders on Twitter.

Reagan says in the ad:

Hi, I'm Ron Reagan, an unabashed atheist, and I'm alarmed by the intrusion of religion into our secular government. That's why I'm asking you to support the Freedom From Religion Foundation, the nation's largest and most effective association of atheists and agnostics, working to keep state and church separate, just like our Founding Fathers intended. Please support the Freedom From Religion Foundation. Ron Reagan, lifelong atheist, not afraid of burning in hell.

The ad got a lot of approving nods. Comedian and actress Sarah Silverman tweeted: “That Ron Reagan atheism psa to sep church and state is mmuah. So good.” Twitter denizen Emo Luments tweeted during the event: “The best part of the debate so far. #ronreagan @FFRF” There were a few dissenting voices. Omarosa Manigault Newman, President Trump’s former acolyte on “Apprentice” and in the White House, expressed her disapproval.

Not surprisingly, the ad received a lot of media coverage, albeit sometimes grudgingly.

“Ron Reagan crashed the Democratic presidential primary debate Tuesday night with a plug for an atheist group that turned his name into the top trending search on Google — as he declared that he was ‘not afraid of burning in hell,’” reported the right-leaning New York Post. And Fox News stated, “Ron Reagan was not on stage Tuesday night for the Democratic presidential primary debate, but his provocative plug for a prominent atheist group earned him the top spot on Google after he declared himself a ‘lifelong atheist, not afraid of burning in hell.’”

FFRF Co-President Annie Laurie Gaylor is delighted about the effect of the ad.

“It just shows how much of an impact a freethought perspective can have, if it’s given a chance,” Gaylor says. “People are hankering for an uncensored freethinking point of view, and it’s to CNN’s credit that it allowed this.”

As a tweet proclaimed during the debate: “Can we all at least agree that #RonReagan won the night?”

FFRF thanks FFRF members who have donated to FFRF’s Advertising Fund for making possible this major campaign and invites fans of the ad to join FFRF in our work to educate the public. 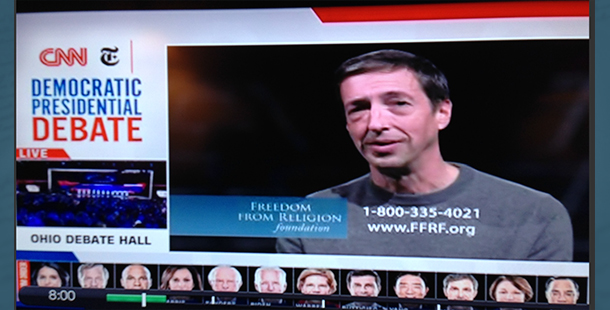