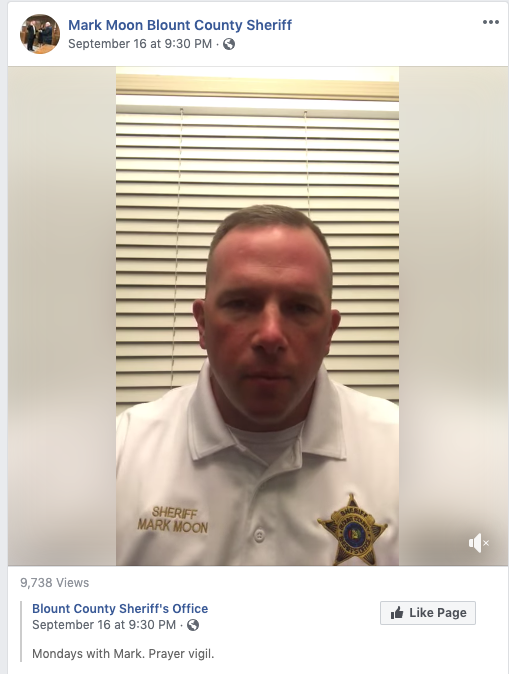 Update: The Blount County Sheriff's Office has announced that it will not officially coordinate a prayer vigil after a letter from the Freedom From Religion Foundation warned it about its lead role. FFRF is pleased at the swift response. "We're glad that the sheriff's office realized its responsibility toward all its citizens," says FFRF Co-President Annie Laurie Gaylor.

The Freedom From Religion Foundation is urging the Blount County Sheriff’s Office to call off a prayer vigil that it is organizing and leading tomorrow.

Sheriff Mark Moon announced a couple of weeks ago that his office would be arranging a prayer vigil on Wednesday, Oct. 2. In explaining his decision to put together the event, he cited the bible, saying among other things that “the lord tells us … seek the face of God.” Moon later explained that the goal was to get “the community together as a county and reach out to the lord.” The vigil is being promoted on the official Blount County Sheriff’s Office website, which cites a number of bible verses (Matthew 21:22 and 2 Chronicles 7:14).

As a government entity, Blount County Sheriff’s Office cannot promote or endorse religion, FFRF notifies the sheriff. Its hosting and promotion of the prayer vigil is a violation of the Establishment Clause of the First Amendment and it must be cancelled immediately.

The city of Ocala in Florida was recently sued for conducting a similar prayer service, FFRF informs the sheriff. The city sponsored and promoted the prayer vigil, which included Christian preaching, proselytization and prayers. In ruling against the city, the federal court explained: “If individuals or religious groups organize a prayer vigil and gather in the downtown square in the city of Ocala to pray for an end to violent crime, the First Amendment to the United States Constitution will protect the ‘free exercise’ of their religion. But what if the government organizes and sponsors the prayer vigil? That is a problem because under the Establishment Clause of the First Amendment, the government cannot conduct such religious activity.”

It also makes no difference that citizens are not required to attend this religious event, FFRF advises the sheriff’s office. Courts have rejected the argument that voluntariness excuses a constitutional violation.

Citizens interact with and rely on law enforcement officers during some of the most urgent and vulnerable times of their lives, FFRF emphasizes. Nonbelievers should not be made to feel excluded, like political outsiders, because the local government they support with their taxes oversteps its power by hosting and promoting government-sponsored religious events. Regardless of any actual bias, the mere appearance of bias undermines the ability for law enforcement to protect and serve.

“The sheriff’s office should concentrate on its secular purpose: keeping citizens safe,” says FFRF Co-President Annie Laurie Gaylor. “It is overstepping its bounds — and causing divisiveness — by engaging in religious activities.”

The Freedom From Religion Foundation is a nationwide nonprofit organization with more than 30,000 members across the country, including in Alabama. Its purposes are to protect the constitutional principle of separation between state and church, and to educate the public on matters relating to nontheism.