Climate crisis is a state/church issue 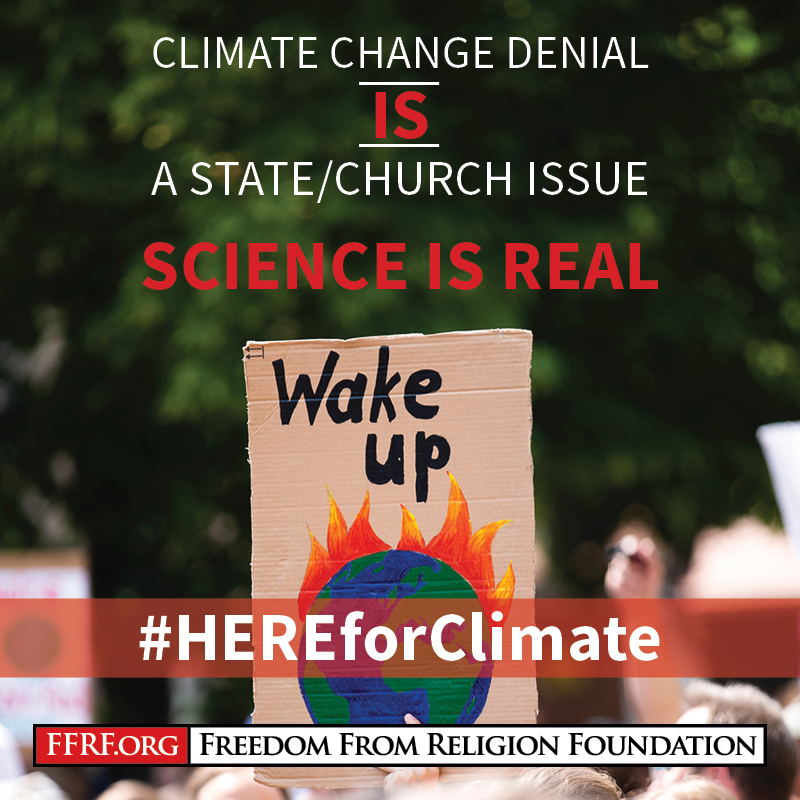 The Strike for Climate on Friday, Sept. 20 provides the ideal opportunity to note that the climate crisis is a state-church issue. Tomorrow a national coalition of youth groups and climate activists are striking for rational, science-based policy to combat this existential crisis.

The climate crisis, the biggest threat facing our planet as a whole, requires urgent action. Unfortunately, the religion that is currently dictating U.S. public policy — Christian Nationalism — is hindering the chance to take meaningful action before it’s too late.

The denial of anthropogenic climate change is based on the rejection of facts and reality in favor of blind faith, wishful thinking or willful denial. Many climate denialists in high places — such as Vice President Mike Pence, Secretary of Energy Rick Perry (the ultimate fox in the chicken coop), and Sen. James Inhofe — deny climate change for explicitly religious reasons.

A significant correlation exists between religiosity and climate denial. While other factors — such as political party affiliation, race and ethnicity — are stronger predictors of views about climate change, Pew Research found it is the religiously unaffiliated, not those who identify with a religious tradition, who are particularly likely to say the Earth is warming due to human activity. . . White evangelical Protestants stand out as least likely to have this view.

Those following literalist strains of religion are primed to reject objective facts such as evolution and climate change. Many believers have been brainwashed by religion to believe it is laudable to reject claims without evidence — or even in spite of the evidence.

Religion’s view of the afterlife hinders our collective ability to tackle climate change. As FFRF Co-President Annie Laurie Gaylor often says: “The only afterlife we ought to care about is leaving our descendants and our planet a secure and pleasant future.” That “afterlife” is being imperiled. Systems that deny facts and reality must not be used to dictate public policy.

By ignoring humanity’s role in climate change, we are not just ignoring reality, we are kneeling before and bowing our heads to the same willful ignorance that has driven religion from one generation to the next.

Secular Americans always have refused to bend our knees to any ignorance — be it rooted in religion or elsewhere.