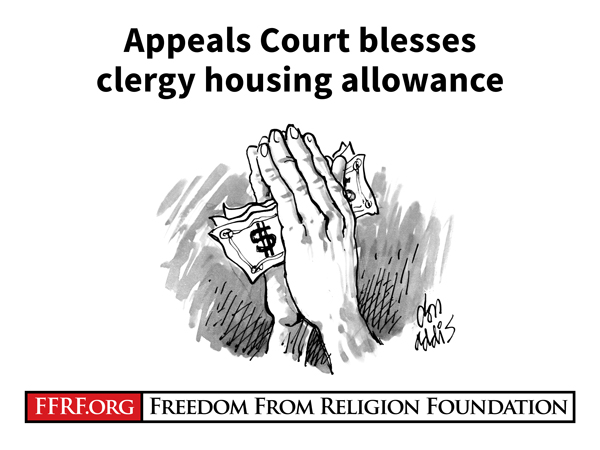 The Freedom From Religion Foundation has been litigating for the past decade over a 1954 law whose sponsor said the purpose of the parish housing allowance is to reward clergy for “carrying on such a courageous fight” against godlessness.

How’s that for a secular purpose?

It’s wrong that “ministers of the gospel” receive almost a billion-dollar-a-year tax benefit, and do not pay their fair share of taxes just because they’re religious clergy, or even just for possessing ordinations or acting like clergy. Jewish cantors get the tax benefit. Even ordained basketball coaches at parochial schools may receive it. Megachurch pastors can write off up to the fair market value of their mega-mansions.

But today, we let the clock run out over the Freedom From Religion Foundation’s chance to pursue our historic challenge before the U.S. Supreme Court. We were winning FFRF’s third permutation of our cutting-edge litigation against the parish housing allowance when the 7th U.S. Circuit Court of Appeals shot down our lawsuit for the second time in March, this time on the merits.

We have full confidence in the legal merits of our challenge of the discriminatory pastoral housing allowance privileges. The IRS code preferentially favors the clergy as a special class, while penalizing those of us who are similarly situated in other 501(c)(3) organizations, particularly secular groups such as the Freedom From Religion Foundation that work to emancipate our society from religious dogma. It also penalizes ordinary taxpayers.

We did not feel the same confidence, however, in how the current Supreme Court would rule in our case, had we appealed. After “counting heads,” we concluded that any decision from the current court would put the kibosh on challenging the housing allowance for several generations.

We began this challenge years ago, when the composition of the Supreme Court was very different. We have (secular) faith that someday the Supreme Court composition will again favor the Establishment Clause and be willing to scrutinize this preferential code and declare it unconstitutional. By ending our challenge at this time, the Freedom From Religion Foundation is making it possible for another challenge to be taken in the future, and we hope to be part of that.

We’re proud that both in 2013 and 2017, we won major district court rulings declaring unconstitutional 26 U.S.C. §107(2) of the IRS tax code. In 2013, U.S. District Judge Barbara Crabb ruled in FFRF’s favor in its original challenge. Crabb’s finding sent “shockwaves through the religious community,” according to the Evangelical Council for Financial Accountability, which bitterly fought the ruling, along with just about every religious denomination in the country. When we lost on standing before the appeals court, we followed their instructions, reconfigured the case, and won yet another strong ruling from Judge Crabb in 2017.

Crabb ruled that “the plain language of the statute, its legislative history and its operation in practice all demonstrate a preference for ministers over secular employees.”

The tax benefit to “ministers of the gospel” is a handout allowing housing allowances paid as part of clergy salary to be subtracted from clergy’s taxable income. The congressional Joint Committee on Taxation has reported that the exemption amounts to $700 million a year in lost revenue. Religion News Service calculated that the allowance increases the take-home pay of some pastors by up to 10 percent. Churches benefit, since tax-free salaries lower their overhead. Christianity Today found that 84 percent of senior pastors receive a housing allowance of $20,000 to $38,000 in added (but not reported) compensation to their base salary.

The Freedom From Religion Foundation is right. This code rewarding clergy for fighting the “godless” (us, in other words) is unconstitutional. But we’re pleased that we have helped to educate taxpayers about the unfairness of a benefit exclusively for ministers and their churches.

It has been eye-opening to see the greed — how aggressively U.S. churches have insisted on maintenance of this preferential treatment. It’s an indictment of the religious establishment that U.S. pastors feel no compunctions about not paying their fair share of taxes. Their charity begins at home.